Kamloops, BC (ISN) – The Victoria Royals began their three game road trip this week with a 6-3 Wednesday night loss in Kamloops.

In a Wednesday night matchup at theInteriorSavingsCenter, the Victoria Royals took on the Kamloops Blazers. The Royals gave Jared Rathjen the start in net, while the Blazers countered with Cam Lanigan.

Kamloopsopened the scoring 2:11 into the game when Brandon Herrod turned off the half boards and fired a shot that rang off the left post before Dylan Willick snapped the loose puck past the stick of Rathjen. The Royals responded under a minute later when off of an offensive zone faceoff, Jesse Zgraggen’s point shot was tipped past Lanigan by Austin Carroll. Victoriapulled ahead 2-1 at the 5:36 mark after Hayden Rintoul gained the Kamloopszone and made a drop pass to Logan Nelson at the top of the right circle. The rookie forward slapped home his 21st of the season over the glove of Lanigan. The Blazers evened the score with a powerplay tally of their own when Tim Bozon redirected a Bronson Maschmeyer point shot through the legs of Rathjen at 14:39. After 20 minutes of play the score remained tied 2-2.

Victoriawould get their second powerplay goal of the evening to go up 3-2 at 4:19 of the middle frame. A scramble in the Kamloopscrease saw Ben Walker find a loose puck and convert for his 8th goal of the season. Lanignan suffered a leg injury on the play and was replaced by Cole Cheveldave before the ensuing faceoff.Kamloops evened the score on a man advantage late in the period. Colin Smith drove hard behind the net and threw the puck out front to an unmarked Maschmeyer, who beat Rathjen high to the glove side. After two periods the teams were tied 3-3.

Kamloopsearned their first lead of the game 1:35 into the final period as Smith beat a Royals’ defender wide and fired a back hand shot at the net. Rathjen stopped the initial attempt before the rebound found the stick of Bozon, who snapped home his second of the night. Five minutes later Smith would feed a pass from the left corner that found Maschmeyer at the back post to put the Blazers up 5-3. Matt Needham added a sixth goal forKamloopsto round out the scoring. Blazers 6 Royals 3.

Victorianow travels to Prince Georgefor a two game weekend series at the CN Center starting on Friday, February 24th. The Royals’ next home game is Tuesday, February 28th when they welcome the Spokane Chiefs to the Save-On-Foods Memorial Centre for the first of back-to-back games. Puck drop is at 7:05 p.m. For further details or to purchase your tickets today, visit the Victoria Royals Ticket Office, www.victoriaroyals.com, or call 250-220-7889. 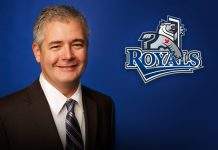 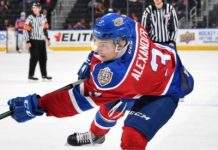