The Canadian swimmers were MacKenzie Glover of Winnipeg, Danika Huizinga of Ajax,
Ont., Hanus and Kelsey Wog of Winnipeg.

”We were very pleased with our performance,” said Huizinga, the youngest team
member at 14. ”We didn’t have that much time to practice together. The key for us
was to keep in mind that this race was not about you. It was for the team.”

”To be one of the youngest competitors in the race I am extremely proud of my
performance,” said Hanus, 16. ”It was a big thrill to be in a final at the Youth
Olympics. It was an alright time for me but with the competition so close it was
more about racing than the time.”

Javier Acevedo of Ajax, Ont., ranked ninth in the 200-m freestyle preliminaries
missing a berth in Tuesday’s final by one spot.

Swimming competition at the Games continues until Friday. Canada is fielding a
seven-member youth team for the event. The other team members are Colin Gilbert of
Kamloops, B.C., and Matthew Mac of Oakville, Ont. 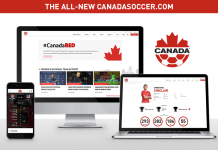 August 12, 2020
Canada Soccer has launched a new digital platform to serve Canada Soccer Nation and prepare for the opportunity that co-hosting the FIFA World Cup™...