The 2014-15 WHL on Shaw broadcast schedule will feature key WHL rivalries airing live throughout the first half of the regular season, and will be available to viewers across Western Canada on Shaw TV and Shaw Direct Channel 299. Shaw is entering its 11th season as the official regional cable broadcaster of the WHL and will be offering all games to viewers in high definition.

The broadcast schedule begins Saturday, September 27, with the Victoria Royals hosting division rivals the Kamloops Blazers. The game will be broadcast live on Shaw TV, beginning with a preview show at 7:00pm PST. On Wednesday, October 1, the WHL on Shaw will feature Tyler Benson, the 2013 first overall WHL Bantam Draft Pick, when the Vancouver Giants visit the Kelowna Rockets.

Shaw will also broadcast 16 additional WHL regular season games in 2015, with a schedule to be announced at a later date, and will broadcast a series in each of the four rounds of the WHL Playoffs. 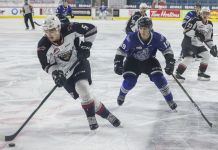