Story and Images by Erich Eichhorn

January 19,2016   Langford, BC  (ISN) –  Bulldog’s centre Dontae Bull exploded for 17 first half points on his way to a game high 30 point performance as the Belmont senior boys high school basketball team rolled on to a 79-65 victory over the visiting Claremont Spartans Tuesday night in Langford.

Bulldog’s Dontae Bull cleans up the glass on his way to a 30 pt performance Tuesday night against the Claremont Spartans in Langford – Erich Eichhorn image (www.allsportmedia.ca)

The now 2-5 Spartans took a run at the Bulldogs right from the tip off, taking a 7-2 lead in the early minutes on buckets by Kyle Clarke, Zach Sawyer, and Spartan’s sharp shooter Zach Manns who would score seven of Claremont’s eleven first quarter points.

Claremont Spartans Zach Manns drives to the hoop for teo of his eighteen poinst on the night – Erich Eichhorn image (www.allsportmedia.ca)

Slow to the start, Belmont’s defense wouldn’t let the Spartans run too far ahead. The Bulldog’s would command the paint and the defensive boards to spark what would end as a 24-4 point run for the Bulldogs to close out the opening quarter 26-11, much on the first quarter shooting prowess of 5”11 guard Jackson Leeder (10pts), Ryan Backhouse (7pts), and Dontae Bull (6pts).

Belmont’s Ryan Backhouse beats Ben Preston to the net for two of his fifteen points on the evening – Erich Eichhorn image (www.allsportmedia.ca)

Dontae Bull “bulls” his way to the net, extending his 6″8′ frame over the Claremont defender – Erich Eichhorn image (www.allsportmedia.ca)

Not to be denied a reply, Spartans head coach Amandeep Vaid would make a defensive change to start the second half, challenging the Bulldogs with a zone defense. Hoping that Belmont’s shooting touch would be cold after Bull’s second frame performance, it was a worthy attempt to take the bite out of the Bulldog’s game.  Spectrum, finding an offensive touch, would cut the lead to 10 pts on the scoring effort of Will Nicholls and Aiden Vickery, potting 7 points each in the third quarter.

The Bulldogs, adjusting to the Spartans defensive change, would exploit the gaps left by the stationary defense and hoist the ball to the net, looking for Bull to control the loose balls on the glass. Bull would add to his game total with another remarkable quarter with thirteen points and help the Bulldogs pull away one final time to go up 68-49.

Nathan Johal looks to get past the defensive effort of Zach Sawyer – Erich Eichhorn image (www.allsportmedia.ca)

Aiden Vickery of Claremont runs into the Belmont double team as he tries to turn the corner to drive to the hoop – Erich Eichhorn image (www.allsportmedia.ca) 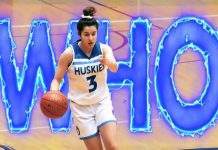 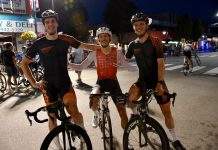 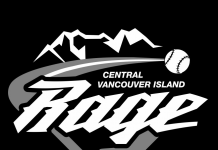