COLUMBUS, Ohio – Eleanor Harvey, a senior on the Ohio State women’s fencing team, made history at the Olympic Games Wednesday morning in Rio de Janeiro, Brazil. Harvey, the 2016 NCAA champion in women’s foil, advanced to the quarterfinals after a massive upset over world No. 1 Arriana Errigo (Italy), 15-11, in the Round of 16 at Carioca Arena 3. It marked the first time a Canadian fencer has advanced to the final eight in the Olympics in women’s foil.

Harvey, a native of Hamilton, Ontario, kept pace with the 2012 Olympic silver medalist and two-time world champion, fencing to a draw and then taking an 11-10 lead at the end of the first period. Harvey’s elusive style disrupted the Italian and allowed Errigo to score just once as she beat the gold medal favorite by four touches in her Olympic debut. In her quarterfinal bout, Harvey battled back against Ines Boubakri (TUN) to tie it at 12-all after being down by six. In a close finish, Harvey kept her medal hopes alive, drawing within one point of Boubari (ranked No. 9 in the world), but fell, 15-13. Harvey was impressive as well in the Round of 32 with a 15-6 win over Anissa Khelfaoui of Algeria.

Three former Buckeyes were also in action this week at the Olympics. Mona Shaito (2012-15) competed in her second Olympic Games representing Lebanon. She fell, 15-3, to Lee Kiefer (United States) in the Round of 32. Kiefer came into the Olympics ranked No. 3 in the world.

In women’s sabre, former Buckeye Eileen Grench (2004-08) represented Panama in her first Olympic games and advanced to the Round of 32 after defeating Chika Aoki (Japan), 15-5. In her second bout, Grench fell, 15-4, to Mariel Zagunis (United States).

On the men’s side, former Buckeye Jason Pryor (2005-09), also made his Olympic debut as the lone U.S. competitor in men’s epee. Pryor, ranked No. 1 in the nation in men’s epee, took on three-time senior world team medalist Ben Steffen (Switzerland) and held a 5-3 lead in the final minute before Steffen scored two singles for a tie and end the period at 6-all. Pryor regained the lead at 9-8, but a pair of single touches put his opponent ahead by one. Steffen then doubled out for the win, 15-14.

Both Pryor and Grench were members of the 2008 national championship team, while Shaito was a part of the 2012 national title team under head coach Vladimir Nazlymov. 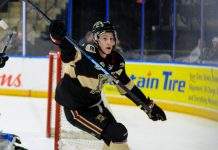 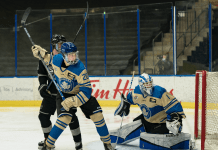 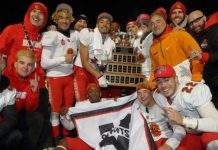