PRINCE GEORGE – The University of Saskatchewan Huskies found their stride offensively in the second half, defeating the UNBC Timberwolves 3-0 at the Prince George Youth Soccer Association Fields on Friday.
Jacob Powell (Vancouver, B.C.), Sam Whiting (Saskatoon, Sask.), and Mohamed Omar (Regina, Sask.) all scored for the Huskies (1-3-1), who outshot the Timberwolves 17-10 in total, and held an 8-5 edge in shots on goal.
Greg Buckley (Saskatoon, Sask.) made five saves for the clean sheet for Saskatchewan, while Mitch MacFarlane (Prince George, B.C.) also stopped five shots in a losing effort.
Saskatchewan had the run of the play in the game’s opening 15 minutes, getting a number of shots off, though MacFarlane was up to the task to keep the match scoreless.
Bryce Marinus (Victoria, B.C.) had a great opportunity in the 19th minute, but Gordon Hall (Chilliwack, B.C.) blocked the shot attempt with a great sliding challenge in the box, and the game remained scoreless through halftime.
The Timberwolves came out firing early in the second half, with Cheona Edzerza (Prince George, B.C.) bending a kick from just outside the 18-yard box. Buckley had to reach to make the save, then an opportunity on the rebound for Dan Goodey (Langley, B.C.) went wide right.
Saskatchewan got on the board in the 66th minute, as a Mitchell Bauche (Saskatoon, Sask.) corner kick rebounded out to Powell, whose shot from just outside the 18-yard box knuckled off MacFarlane’s hands and into the top right corner for the 1-0 advantage.
Whiting gave the Huskies a two-goal cushion in the 82nd minute, converting a header off a cross before Omar iced it in added time on a similar play.
UNBC will try to rebound on Sunday at 11 a.m. against the University of Winnipeg Wesmen, while the Huskies are off to Vancouver to take on the CIS No. 2 UBC Thunderbirds at 1 p.m. Pacific time. 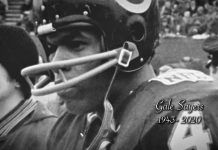 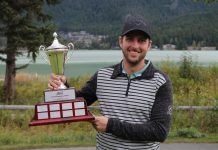