Canada now faces Kenya in the challenge trophy quarterfinal at 1:14am ET/10:14am PT.

Two tries from Jerry Tuwai put Fiji ahead 12-0 early on before Kitione Taliga pushed the lead to 19-0. However, Canada got a try right before the interval as Phil Berna found a gap and sprinted away to touch down under the posts with Nathan Hirayama converting.

Canada continued to build in the second half as Hirayama, thanks to great work from Justin Douglas and Pat Kay, scored before Adam Zaruba touched down in the corner to tie things at 19-19 before Nacuqu would break Canadian hearts with a try under the sticks seconds before time expired.

Canada once again showed heart to come back after falling behind early as they suffered a second consecutive one try loss. Argentina jumped out to a quick 14-0 lead as Bautista Delguy and Santiago Alvarez dotted down with captain Gaston Revol converting both times.

Canada got back into the game as Adam Zaruba scored his 15th HSBC World Rugby Sevens Series try to cut the lead to 14-7 at the break after Nathan Hirayama’s conversion with Fernando Luna in the sin bin for Argentina. Argentina pushed their lead back to 14 points as debutant Matias Ocsaduk scored his third try of the day but Liam Underwood hit back immediately in his first appearance on the series in more than a year. Canada couldn’t generate much in the closing moments however and suffered its second straight defeat by a converted try.

A strong fightback from Wales meant that Canada would go home winless on Day 1 of the season opening tournament. Adam Zaruba continued his fine form to start the year as he touched down inside 90 seconds but that would be all Canada could muster offensively. Tries from captain Luke Treharne and Lloyd Evans gave Wales a 12-5 advantage at the break.

Controversy arose to start the second half as Ethan Davies scored Wales’ third try with Canadian captain John Moonlight in the sin bin but replays clearly showed that Davies never grounded the ball but referee Jaco Kotze awarded the try nonetheless. Wales would score twice more through Ben Roach and Ethan Davies again to round out a 31-5 victory. 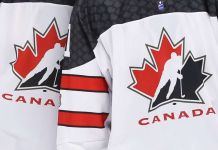