The Canadian Hockey League today announced that Zach Sawchenko of the Moose Jaw Warriors is the Vaughn CHL Goaltender of the Week for the second straight week ending February 26 after posting a 4-0-0-0 record including a shutout victory with a goals-against-average of 1.50 and save percentage of .946.

Sawchenko becomes the league’s first back-to-back and three-time award recipient this season after making 105 saves in four wins last week for the Warriors who have now won six-straight games.  His week began with a pair of road victories over tough Eastern Conference competition including a 19-save effort on Tuesday in a 6-3 win over the Medicine Hat Tigers, followed by a 32-save performance on Wednesday as first star of a 3-1 win over the Lethbridge Hurricanes.  His weekend included a 25-save victory on Saturday in a 5-2 triumph against the Swift Current Broncos, and wrapped up with a 29-save shutout earning first star honours in a 2-0 road win against the Saskatoon Blades.  The Warriors are now third place in the conference with a 38-17-7-1 record.

A 19-year-old from Calgary, AB, Sawchenko is playing in his fourth career season with the Warriors who chose him in the second round of the 2012 WHL Bantam Draft.  So far this season he carries a 27-11-5-1 record with three shutouts along with a 2.66 goals-against-average which ranks fifth in the WHL, and a .921 save percentage which is tied for the third best mark. 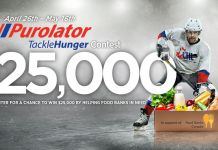 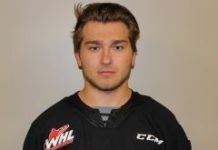