With just two days left until kick-off, excitement is building in Hong Kong ahead of the seventh round of this year’s HSBC World Rugby Sevens Series.

South Africa lead the standings on 126 points, 23 ahead of nearest rivals, England. The Blitzboks have won four rounds, England two with Fiji in third place, ahead of old rivals, New Zealand.

The 16 team captains gathered under the old clocktower in Hong Kong on Wednesday afternoon, along with captains from the 12 teams that will play for a place in the series qualifier that also runs over the weekend. A qualifier to become a core team on the women’s series gets underway on Thursday at nearby So Kon Po.

Olympic champions Fiji, who currently lie in third place, are yet to win a round of the series this season but captain Osea Kolinisau says his side are preparing well for the event this weekend.

“We feel good after coming into Hong Kong early and we’re in a really good place and are getting things right. We have some tough games and every pool game is tough but it’s a good challenge. Hong Kong is a special place for every young Fijian. We grow up watching our idols who have worn the white jersey. It’s like a right of passage – we say if you haven’t played in Hong Kong, you haven’t played for Fiji!”

The last rounds of the series saw USA get to the semi-finals in Vegas and Vancouver and captain Madison Hughes thinks his side could benefit from the atmosphere in the famous Hong Kong stadium: “It’s an absolutely incredible atmosphere – the whole crowd get into the game and it just flows onto the field. We are in a strong pool with Scotland, Argentina and Russia but we’re confident in ourselves. We’re hoping for at least a semi-final but it’s about going out there and doing that now.”

Hong Kong could also be a special weekend for England’s Dan Norton who is set to become the series top scorer if he dots down on Friday, Saturday or Sunday. The 29 year old has scored 244 series tries and will beat the record set by Kenya’s Collins Injera with his next try.

His coach Simon Amor paid tribute to the winger: “Players like Dan Norton set the world on fire and make the game of sevens so exciting. He is quick, which helps when you’re a winger! He’s got wonderful feet, but one of the things people don’t realise is that he is one of the most durable players we have, never misses one minute of training and is fit…and he can keep getting better.”

World Rugby Vice-Chairman Agustín Pichot said: “Hong Kong is one of the biggest and most unique tournaments on the HSBC Sevens Series circuit and this weekend will be yet another fantastic event.

“South Africa are deservedly leading the field but there is still a lot of rugby to be played and it will be interesting to see who lifts the trophy on Sunday evening here at the Hong Kong Stadium.”

Giles Morgan, Global Head of Sponsorship and Events at HSBC said: “We are delighted to be back once again for the Cathay Pacific HSBC Hong Kong Sevens. Located in our spiritual home, this tournament always has a special place for HSBC, but this year there is a tangible feeling of significance around the showpiece event of the Series. It is the first Hong Kong Sevens after Rugby Sevens’ highly successful inclusion into the Olympic programme in Rio and the game is now growing from strength to strength all over the world. It’s because it is such an important time for the game that we were proud just a few weeks ago to launch the HSBC Try Rugby programme alongside the Hong Kong Rugby Union and by giving school children the opportunity to learn the game and it’s values from an early age, we hope to continue the development of the sport in Hong Kong.” 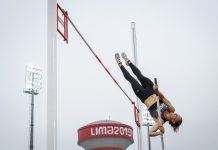