VANCOUVER, BC – Vancouver Whitecaps FC announced on Friday that the club has signed Nigerian midfielder Nosa Igiebor through the remainder of 2017 with club options for 2018 and 2019.

“Nosa is a box-to-box midfielder who brings a lot of experience having played in some of the top leagues in the world,” said Whitecaps FC head coach Carl Robinson. “When you have an opportunity to bring in a player with this pedigree, you take it. Nosa adds competition for places in our midfield, which will only help strengthen our group.”

The club also confirmed on Friday that midfielder Matías Laba, who underwent successful right knee surgery last month, has been placed on the Disabled List; Igiebor will occupy the international slot previously held by Laba.

Igiebor, 26, has appeared in over 300 matches at the professional level, including 28 appearances in Spain’s top-tier La Liga, 21 in the UEFA Europa League, and four in the UEFA Champions League.

Most recently, Igiebor was a member of Çaykur Rizespor in Turkey’s top-flight Süper Lig, where he recorded one goal and two assists in 15 appearances, including a pair of Turkish Cup matches, during the second half of the 2016-17 season.

During his time in Israel, Igiebor was a two-time Israel State Cup winner, scoring the game-winning-goal for Hapoel Tel Aviv in the 2011-12 final, in addition to winning the 2014-15 Israeli Premier League and Toto Cup titles with Maccabi Tel Aviv.

Internationally, Igiebor has two goals in 15 appearances with the Nigerian national team and was a member of the team that won the 2013 African Cup of Nations. He was also named to Nigeria’s preliminary 30-man roster for the 2014 FIFA World Cup and represented his country at the U-20 level. 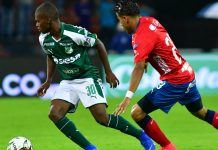