A big receiving day and a pair of key performances in a lopsided win highlight the Week 3 Canada West football players of the week.

Offensively, Trivel Pinto is the player of the week after picking the right time to have one of the best nights of his UBC career, as the third-year receiver posted 165 yards on 10 catches in front of 9,542 fans at Thunderbird Stadium for UBC’s annual homecoming game. The crowd was the largest in UBC’s football history and the third largest in CW football history, behind Manitoba’s 10,199 in 2013 and Regina’s 16,500 last season in the first football game played at New Mosaic Stadium.

The Calgary Dinos offence may have put up an eye-popping point total in their 76-17 win over the Manitoba Bisons, but it’s the defence and special teams that have earned weekly honours from the conference.

In front of the third largest crowd in Canada West football history, UBC’s Trivel Pinto put on a show Saturday night in Vancouver to earn the offensive player of the week award. The third-year arts student posted 165 receiving yards on 10 catches in the Thunderbirds 31-10 win over the Saskatchewan Huskies.

With 9,542 fans in attendance for UBC’s annual homecoming game, Pinto was electric, finishing the night with nearly 250 all-purpose yards, as he added 33 rushing yards and a combined 44 return yards. With the victory, the T-Birds improved their record to 2-1 and moved into a tie with the Huskies and Regina Rams for second in the conference standings.

Defensively, Jack McEwen is the player of the week after registering 4.5 tackles – all of them coming behind the line of scrimmage. The defensive lineman earned three sacks and another tackle for loss, as the Dinos ran their record to 3-0, holding the Bisons to just 87 passing yards in the process.

Last year’s Canada West sack leader (4.5), McEwen was a conference all-star in 2016 when he registered 18 total tackles. McEwen’s three sacks was a single-game career best for the fifth-year Calgary native.

On special teams, kicker Niko Difonte helped Calgary pile on the points, connecting on three of four field goals for the Dinos. The Winnipeg native made all three kicks from 40 yards or more, including a career long 48-yarder in the fourth quarter. The kick was the longest by a Dino place kicker since Aaron Ifield’s 51-yarder in October of 2010 and tied for the sixth longest in program history.

The second-year Arts student leads the conference in scoring through three games with 51 points – 30 of which have come via field goals. 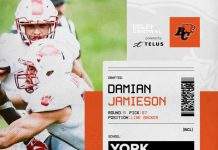 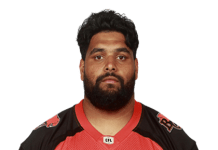 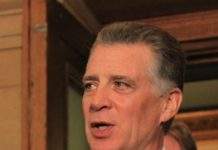