PYEONGCHANG, Kor.—Fresh off a historic bronze-medal biathlon performance, Canada’s Collin Cameron was charging for the podium once again – this time coming up just short finishing fifth in a 15-kilometre sit-ski race – at the Paralympic Winter Games in PyeongChang, Korea.

The Paralympic rookie from Sudbury, Ont. battled through warm weather and soft snow conditions at the Alpensia Biathlon Centre to post a time of 43:40.9 seconds in the middle distance cross-country ski event.

“It was really soft out there, but the skis were still fast. The skis have been awesome both days – the guys are working their butts off back in the wax room,” said the 29-year-old Cameron.

“The goal today was to just start steady and be comfortable, to get rid of the bugs from yesterday’s race because I was pretty tight.”

The powerful Canuck grinded his way up and down the relentless hills that lead the top sit-ski athletes on the planet in and out of the stadium filled with thousands of screaming fans cheering the world’s best around the three-kilometre loop they are forced to complete five times.

“I was able to loosen up as I went along, which allowed me to dig a little deeper today,” said Cameron, who yesterday became the first Canadian male ever to win a Paralympic medal in the biathlon sit-skiing classification.

“It’s tough to go from biathlon to this event. It is a totally different mindset for pacing, a totally different game. “I wasn’t event thinking about (winning a medal yesterday) I just wanted to build off it and take that momentum with me the rest of the week. Today was a different day and I’m happy with how I was able to perform.”

The Ukraine’s Maksym Yarovyi won the grueling Nordic challenge with a time of 41:37.0. Daniel Cnossen, of the United States, backed up his golden biathlon triumph on opening day, with a silver medal on Sunday, clocking-in at 42:20.7. Korea’s Eui Hyun Sin brought the hometown crowd to its feet with a bronze-medal performance, stopping the clock at 42:28.9.

Two other Canadians battled into the top-10. Chris Klebl, of Canmore, Alta., was eighth at 43:54.0. Derek Zaplotinsky, of Smokey Lake, Alta., chalked up his second ninth-place finish in as many days with a time of 44:03.7.

“It was really hard and soft,” said Ouellet. “This is my first race over five kilometres and it was tough. Basketball is all stop and go, but endurance is much different. I just need more races.”

Kendall Gretsch, of the United States, was crowned Paralympic champion in the women’s race, shattering the field with a time of 38:15.9.

The world’s best Paralympic standing and visually impaired athletes, including Canada’s Brian McKeever, Mark Arendz, Emily Young and Brittany Hudak, will be on the start line Monday for a 15- and 20-kilometre cross-country skate-ski race. 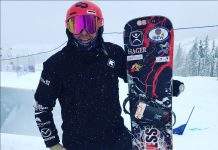 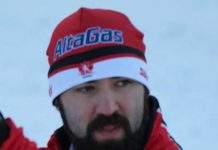 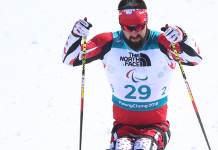