David and veterans of the team welcomed the six newest Vikes: Emma Dewit, Annalyn Kind, Abby MacKenzie, Ali Martin, Mackenzie Ringrose and Emma Skalik in an announcement held during the annual soccer tournament that is hosted at UVic.

This group of outstanding athletes includes four players from Vancouver Island as well as athletes from Calgary and Edmonton.

After a 2018 season that saw the Vikes finish fifth in the nation, these newest additions to their roster will bring a youthful exuberance to an already young team according to David.

“We had a very good season this past year with a young team, and we are looking to bolster our lineup after the losses of some key veteran players like Emily Lieuwen, Elise Butler and Stephanie Badilla Gutierrez. These are young, exciting players that we hope in some point in their careers will fill those shoes and I think the optimism and excitement they will bring will help us reach our goals.”

A team captain on both her community and school teams from 2016-18, Emma Dewit from Duncan, B.C. was also a standout basketball player throughout her high school career. Dewit was the top goal-scorer on a team that won the Coastal ‘B’ Cup and finished second at the Provincial ‘B’ Cup in 2017.

“I am very excited to be a part of such a great program with great coaches and teammates,” said Dewit. “The team is not only very welcoming but also very friendly, I look forward to becoming a better player and continuing my passion for soccer.”

An outside midfield player from Victoria, B.C., Annalyn Kind has been a top-player for both the Vancouver Island Wave as well as the Reynolds Secondary School teams. Named the MVP of Junior Girls School Soccer in 2016, the 5’5″ Kind already has some familiarity with the program, having previously been coached by Vikes assistant coach Dave Dew.

“Getting the opportunity to play for the Vikes is a childhood dream realized,” said Kind. “I am so grateful to have been given this chance to play at a highly competitive level and to begin the next chapter in my life with a new team, a new coach and a new family.”

Another local product, Abby MacKenzie was the recipient of the Female Grade 11 athlete of the year from the Reynolds Centre for Soccer Excellence in 2016. A two-time Mayor’s Cup winner, the full back was also a member of the Reynolds Academic Honour Roll for the past three years.

“I am so honoured and excited that I get a chance to be a member of such a talented varsity soccer team in my own hometown,” said MacKenzie. “Ever since I started playing this has been the ultimate goal for me. The fact that I am able to play at this level is such a privilege, and I look forward to playing with many other women with an intense mindset, while being pushed towards success.”

Ali Martin comes to the Vikes by way of Calgary, Alta. where she was a standout for both the Calgary Blizzard club program as well as at William Aberhart High School. The 5’6″ forward carries a storied past with her, having won School City as well as Club City soccer titles while being named the Aberhart High School team MVP in 2018.

“I chose UVic because of the beautiful campus, friendly atmosphere, and great programs,” said Martin. “I loved watching the Vikes play this past season, and I’m so excited to be a part of the vibe and the energy this team has.”

Born and raised in the Vancouver area, Mackenzie Ringrose will return to the West Coast after spending time in Edmonton, Alta. A member of the Jr. Pandas from 2015-18, Ringrose was selected to Team Alberta in 2014 and is a three-time Athletic Award winner during her time at Strathcona High School.

“I am proud to be playing for Tracy David and the Vikes,” said Ringrose. “I look forward to contributing to the team success and hopefully capture a National Championship.”

The Senior Athlete of the Year from Carihi Secondary School in 2017, Emma Skalik will join the Vikes from Campbell River, B.C. A member of the Upper Island Riptide for the past five years, the 5’5″ Skalik is a midfielder.

“I’m excited to attend UVic to study the child and youth care program,” said Skalik. “I like the fact that the campus is small and not too far from my hometown. I look forward to playing with many talented women and making great memories with the team.” 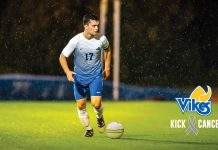