The Victoria Shamrocks are pleased to announce that Matt Yager has been appointed to wear the C as team captain and Greg Harnett and Jesse King will don the A’s as alternate captains.

Yager, 29, is a veteran of eight seasons with the Shamrocks and a native of Victoria. The steady, reliable defender has played a total of 194 regular season and playoff games in which he has scored 30 goals and 62 assists and racked up 109 minutes in penalties. He was appointed as an Alternate Captain in 2016 and previously served as team captain of the Junior A Shamrocks. He was a key part of the Shamrocks Mann Cup championship team in 2015.

“It’s an honour and privilege to be captain of the Shamrocks,” said Yager. “It is extra special for me being from Victoria and growing up watching and dreaming of playing for this great organization. I hope to lead with hard work and dedication. I’m fortunate that we have a good group of players and leaders in our dressing room that will make this season successful.”

“Matt Yager personifies what it means to be a Victoria Shamrock,” said Shamrocks general manager Chris Welch. “He shows up to work every day and never takes a shift off. He always makes time for the fans, especially the kids and is the first to volunteer for appearances in the community. He has been and continues to be an outstanding player for us and I’m confident he’ll be a great captain, plus he has the benefit of strong support from Greg and Jesse as well as from Ben McCullough who is also part of our leadership group.”

The Victoria Shamrocks open the 2018 season at home on Friday night, May 25th against the Burnaby Lakers. 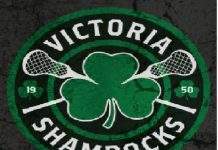