LETHBRIDGE, AB – It was captain Hamish Walde stepping up a curling a free kick in extra time, around the wall and into the top left corner, that averted the road loss for UBC Okanagan as they thwarted the Lethbridge Pronghorn men’s soccer team’s solid effort and forced the Pronghorns to settle for a 1-1 tie.

Coming off a bye week, Lethbridge, playing at home, carried the lead into the final minutes but the Walde goal off a stoppage time free kick salvaged a draw and the Heat’s record moves to (1-3-3). The tie produces the first points for the Pronghorns this season and move their record to (0-4-1) on the season.

On the day the Pronghorns held a heavy advantage in the shot department, attempting 16 shots to the Heat’s five, with the Pronghorns hitting the mark six times and the Heat only registering two shots on goal.

Majority of the opening half was a midfield battle with neither team able to sustain any offensive pressure. In the opening 45 minutes, the Pronghorns had nine shot attempts but majority of the shots were from long range. UBCO only attempted one shot on goal in the half.

The two most dangerous opportunities came off the boots of Pronghorns. In the 34th minute Pronghorn captain Sean Gaiesky took a ball inside the Heat penalty area but his shot just missed the near post.

Six minutes later Stephen Primeau was sprung by Nick Leszczynski in close but Primeau’s attempt was blocked into touch by a Heat defender for the only corner of the opening half attempted by either team.

The Pronghorns started the second half on the right foot, nearly breaking the deadlock but Alasdair Coyle’s long range shot just sailed over the crossbar only seconds in to the half.

Off the second corner kick of the game, the Pronghorns did finally break through. Stephen Primeau’s sweeping corner deflected off Pronghorn Ellis Davies and past Heat keeper Nicholas Reitsma for his first goal of the season.

Pushing forward looking for the equalizer, the Heat were finally able to sustain some pressure in the Pronghorns half. In the 76th minute, Hamish Walde got a head on a free kick but just missed the far post.

The Pronghorns did have their opportunities to extend the lead but could not capitalize on a pair of superb chances. Both Stephen Primeau and Kyle Angerilli had shots from free kicks that made it to the net but could not beat Reitsma, who was in perfect position for both.

Well into stoppage time the Heat took full advantage of a late free kick awarded just outside the penalty area after Nikhil Reddy sent a long pass that forced the ‘Horns defender to haul down the UBCO forward for the whistle. Captain Hamish Walde curled a ball around the Pronghorns wall and into the top portion of goal to salvage a tie for the Heat. 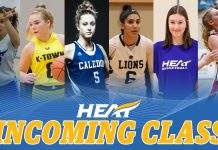