Week two of PACWEST competition caught the Camosun men’s golf team in the rough as newcomer squad members ironed out their first time game jitters while the team fought to a fifth place finish shooting a tournament total of 622 at the UBCO Invitational at the Okanagan Golf and Country Club, September 15-16.

“The team had a challenging weekend,” comments Chargers Head Coach Doug Hastie. “We took seven players including two individuals because we want to give everyone some playing time this year. Unfortunately, our rookies did not fair too well and this affected our team score. The guys did, however, learn a great deal and the only way to get comfortable is to put yourself under pressure. Veteran Mike Flegel played well despite a bad back and if the putter had cooperated for our two other returnees, Scott Merriam and Alex Cordero, the numbers would have been a lot better.”

The reigning CCAA National champion University of the Fraser Valley men’s squad shot a two-day total of 568 to win the event with a 17-stroke lead. The hosting UBC-Okanagan Heat came in second with 585 and the VIU Mariners rounded out the Top 3 with 608. Complete results here.

PACWEST action resumes September 29-30 as Fraser Valley hosts the UFV Invitational at the Ledgeview Golf and Country Club in Abbotsford.

“We now have a week off before our next event to get some practice in and do some extra preparation,” states Coach Hastie. “We are looking forward to the UFV event at the end of the month and to the PACWEST Championships in October.” 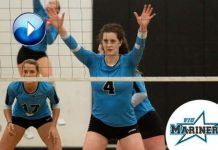 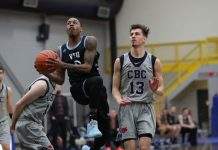