CALGARY, Alta. – Hockey Canada and the Canadian Junior Hockey League (CJHL), with assistance from NHL Central Scouting, have identified a list of 84 players from across the country who have earned invites to selection camps in advance of the 2018 World Junior A Challenge in Bonnyville, Alta.

From Dec. 2-4, 40 Team Canada East hopefuls will gather at the MasterCard Centre in Etobicoke, Ont., for three days of games and practices as part of the evaluation process.

“We are excited to bring together a very talented and hard-working group of players, and we expect a highly competitive selection camp in Etobicoke,” said Vanstone. “We understand that difficult decisions will have to be made in order to ensure we give ourselves the best possible chance to win, and we look forward to assembling Team Canada East and starting our quest for a gold medal.”

Team Canada East will kick off the tournament against Russia on Dec. 9 at 2 p.m. MT when the World Junior A Challenge returns to Bonnyville for the second time in three years.

Meanwhile, a group of 44 invitees will gather in Calgary from Dec. 3-5 at the Markin MacPhail Centre at WinSport’s Canada Olympic Park for the Team Canada West selection camp. The players will participate in games and practices before departing for Bonnyville on Dec. 6.

“After months of work put in to identifying players, our group is excited to bring a talented group together for selection camp, and we look forward to helping assemble Team Canada West for what should be a highly-competitive international tournament in Bonnyville,” said Saurette. “We know these 44 players will bring a competitive and hard-working attitude to camp as we look to select our 22-player roster for the 2018 World Junior A Challenge.”

Team Canada West will open its tournament against the United States at 7 p.m. MT on Dec. 9 at the R.J. Lalonde Arena in Bonnyville. 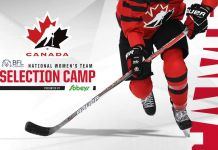