ISN
Home Hockey
Share on Facebook
Tweet on Twitter
Seattle Thunderbirds general manager Bil La Forge today announced right wing Andrej Kukuca has been invited to the Team Slovakia Training Camp for the 2019 World Junior Championship which takes place in Vancouver and Victoria, British Columbia, from December 26, 2018, to January 5, 2019.
“We are very proud Andrej has been invited to the Slovakian Training Camp” said La Forge. “He is an important member of our team and we look forward to watching him play for his country in the tournament.”
It is anticipated Kukuca will leave the T-Birds on December 14 to join the Slovakian Training Camp. It is not known at this time when Slovakia will announce their final roster for the World Junior Championship.
Kukuca has five goals and 12 assist for 17 points in 23 games this season. He was selected by the T-Birds in the first round, 29th overall, in the 2018 CHL Import Draft. Kukuca had 43 goals and 27 assists in 44 games for Trencin in the Slovakian U20 Junior League last season. In 18 playoff games last season he had 18 goals and 10 assists for 28 points.

T-BIRDS CAN’T GET PAST AMERICANS 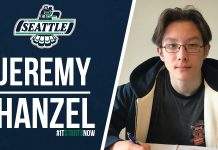