Canada’s National Junior Team hopefuls will face a team of U SPORTS all-stars during selection camp as part of their quest to wear the Maple Leaf on home ice at the 2019 IIHF World Junior Championship.

The three-game series marks the seventh-consecutive year Team Canada and U SPORTS (formerly CIS) will meet ahead of the annual holiday tournament. Canada’s National Junior Team Sport Chek Selection Camp will be held at the Q Centre, home of the Victoria Grizzlies of the B.C. Hockey League, and features games Dec. 12 and 13 at 6 p.m. PT, and Dec. 14 at 2 p.m. PT.

Tickets go on sale Sunday, Dec. 2 at 10 a.m. PT for $15 plus fees and will be available at HockeyCanada.ca/Tickets, as well as at the Q-Centre and Save-On-Foods Memorial Arena box offices.

“The announcement of the Sport Chek Selection Camp schedule is another indication of how close we are to puck-drop on Boxing Day,” said World Juniors director Riley Wiwchar. “Excitement has been building for months in B.C., and with the focus now shifting to Victoria, we know fans are eager to show their support for Team Canada as it prepares to defend the gold medal.”

Canada will finalize its 22-player roster for the 2019 IIHF World Junior Championship following its four-day camp, then make its final preparations with games against Switzerland, Slovakia and Finland as part of the Lordco Road to the World Juniors pre-tournament schedule. Nine communities across the province will play host to 12 games, featuring all 10 competing teams, from Dec. 18-23.

Canada will open the World Juniors on Boxing Day against Denmark at 5 p.m. PT/8 p.m. ET in Vancouver. Its preliminary-round schedule also includes games against Switzerland, the Czech Republic and Russia before the bronze- and gold-medal games Jan. 5 at Rogers Arena. 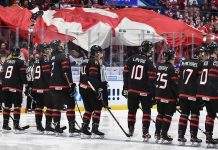