The Western Hockey League announced today that Moose Jaw Warriors forward Brayden Tracey has been named WHL Rookie of the Month for November 2018.

Tracey recorded 16 points (5G-11A) and a plus-16 rating in 10 games during November as the Warriors climbed to third in the East Division and fourth in the Eastern Conference. Tracey also impressed with five multi-point performances, including two three-point games and three two-point games.

Recording points in nine of 10 games, Tracey’s momentum propelled him to 10th in WHL scoring for the month of November. He was also instrumental to the Warriors’ success on Saturday, November 24 when he scored in overtime to defeat the Lethbridge Hurricanes, the first game-winning goal of his WHL career.

Tracey was recognized as the first star of the game once as well as third star of the game in three other contests during November. Scoring four even-strength goals and one power-play goal in the past month, Tracey has played a leading role in the Warriors certainly made an impact as part of the Warriors’ strong rookie contingent.

Selected 21st overall by Moose Jaw in the 2016 WHL Bantam Draft, the 6-foot-0, 174-pound forward is a product of Calgary, Alta. Tracey came to the Warriors from the Calgary Midget AAA Northstars program, where he recorded 52 points (21G-31A) in 30 games during the 2017-18 season. He represented Canada at the 2017 World Under-17 Hockey Challenge, winning a silver medal. He also represented Alberta at the 2016 WHL Cup, winning a gold medal. 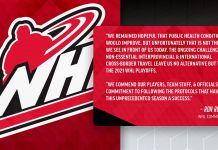