Sitting at #2 in the PACWEST standings, the four-time defending champion Camosun Chargers Men’s Volleyball team is preparing for a shot at capturing their fifth consecutive title at the 2019 Provincial Championships, February 21-23 in Cranbrook.

If they succeed, Head Coach Charles Parkinson will lead the Chargers to PACWEST history as the first men’s volleyball team to win five championships in a row – and, the squad’s fifth-year middle blocker, Douglass Waterman, will stand as the first men’s volleyball student-athlete to stay golden throughout all five years of his eligibility. While Waterman has the potential to set a new record for his outstanding work on the court, another record that strikes a chord with the 6’5” Chargers veteran is the kind that is frequently found on vinyl.

“It’s my favorite thing to do,” says Waterman who is in his second year as co-captain and final year of studies in Camosun’s Bachelor of Sport and Fitness Leadership program. “I’m a producer first, but rapping and singing is also something I’m passionate about doing. I’ve always been intrigued with creating and experimenting with sound, but it wasn’t until the end of my first year at Camosun that I actually bought production equipment to actually start doing it. I like the process of trying to make something from scratch. The lyrics, the melody, the harmony… it’s just all my thoughts and no one can dispute it.”

Waterman, who goes by guod_boy on Instagram, performs primarily as a solo artist but attributes his skills to a diverse musical background.

“Growing up, I picked up a number of musical instruments not really knowing that I would ever do what I’m doing now,” explains Waterman. “I was in cadets and I played the snare drums so that’s sort of where all my percussion-type knowledge comes from. I also took piano lessons when I was young. I didn’t really love it all that much but now I wish I would have stuck with it because the theory behind it would’ve been really good to know. And when I was in middle school I was in band class. All of these things helped me with what I can do now.”

With almost five years of practice and hard work at creating rhythms and rhymes, Doug’s goal of becoming producer is right on track. He has performed in places as far away as Los Angeles, and as close to home as the Upstairs Cabaret in Victoria.

“The show in LA this past summer and the show I did at Upstairs back in December are definitely the highlights of my music career so far,” states Waterman who enjoyed performing in front of a very supportive home crowd in Victoria. “The show in LA was called the Showcase Tour. It’s basically an organization that gets unknown artists on stage. I did a show in Vancouver and I won the show which got me another show that was supposed to be in Seattle. Unfortunately, the Seattle show got cancelled, so I asked if I could do it somewhere else. They said sure, pick a city, so I chose LA and flew down. It was a really cool experience… it was a small club, but it was packed and I got a really good response which was great because I was a real unknown and didn’t really know anyone there.”

With the PACWEST Provincial Championships and the Canadian Collegiate Athletic Association National Championship coming up just around the corner, Doug is keeping focused on enjoying his last two months of competing and being with his coaches and teammates.

“Winning Provincials for a fifth time would be amazing,” says Waterman who is one of the league’s top blockers. “It would also qualify us for Nationals for the fifth time in a row and that would be something to be a part of. I still have a few courses to complete before getting my degree, so I won’t be leaving Camosun completely just yet.”

“Once the season wraps up, and the summer comes along, I can really start putting my name out there. I plan to have more music ready by that time and to put my name forward for festivals and other events in Victoria. I definitely want to make a name for myself. It would be great if I got to the level where people around Victoria recognize me as a hip-hop artist… that’s kind of a goal of mine for sure. I think it’d be really fun.”

Catch Doug and the Chargers men’s and women’s volleyball teams in their first home games of 2019 this weekend, as Camosun plays host to the Columbia Bible College Bearcats from Abbotsford. All matches located at the Pacific Institute for Sport Excellence on Camosun’s Interurban campus (4371 Interurban Road). 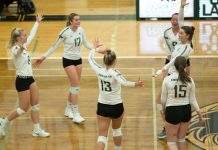