The BC Lions are saddened to report the loss of former standout defensive lineman Gary Robinson.

Originally drafted by the Winnipeg Blue Bombers in 1969, the Simon Fraser grad was quickly snapped-up by the Leos when he was placed on waivers by the Bombers that summer. Developing into a mainstay along the club’s defensive line, the talented local product went on to appear in 135 regular season games for the Lions from 1969 to 1978. 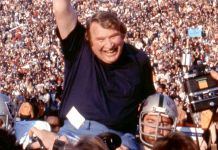