When SFU captain Mathew Berry-Lamontagna steps on the ice this Friday for his second last regular season game, he will set a new BCIHL all-time record for games played, breaking UVIC graduate Shawn Mueller’s record of 119. Now in his 5th season, “Berry” as the team calls him, has long surpassed the all-time record for points by a defenceman, currently sitting at 88 points (35 goals and 53 assists) in those 119 games played. In fact, Berry is currently ranked #17 all-time in points among both forwards and defencemen. Berry also has all-time mark for goals by a defenceman at 35.

The soft-spoken Vancouver native leads by example in the SFU dressing room, a trait he picked up over an impressive junior career with the Prince Albert Raiders (WHL), West Kelowna Warriors, Coquitlam Express and Cowichan Valley Capitals (BCHL). With a rash of injuries on the SFU blueline this season, Berry and long time teammate Darnel St. Pierre have logged a staggering number of minutes through the course of the season.

The increased workload hasn’t phased him though, and combined with the pressures of completing his senior year in Environmental Science with full time classes, Berry has managed to play in every game this season (and every game in his entire BCIHL career for that matter).

“It’s been a pleasure coaching him,” says SFU Head Coach Mark Coletta. “He’s a great player for us both on and off the ice. He’s always the first guy on the ice and just loves being at the rink whether it’s for practice or games. He’s also a fine young man, a good individual who comes from a good family.”

Berry-Lamontagna will leave a number of marks on the SFU program once this year’s squad writes its final chapter. The smooth-skating blueliner has more game-winning goals than we can remember. The one that sticks out the most was a come-from-behind win last season against the same Selkirk College Saints that visit Burnaby this weekend. Berry’s game winning overtime goal was an effortless end to end rush topped off by a bar-down slapshot from just inside the blueline. The January win would propel SFU into one of their longest win streaks on record. 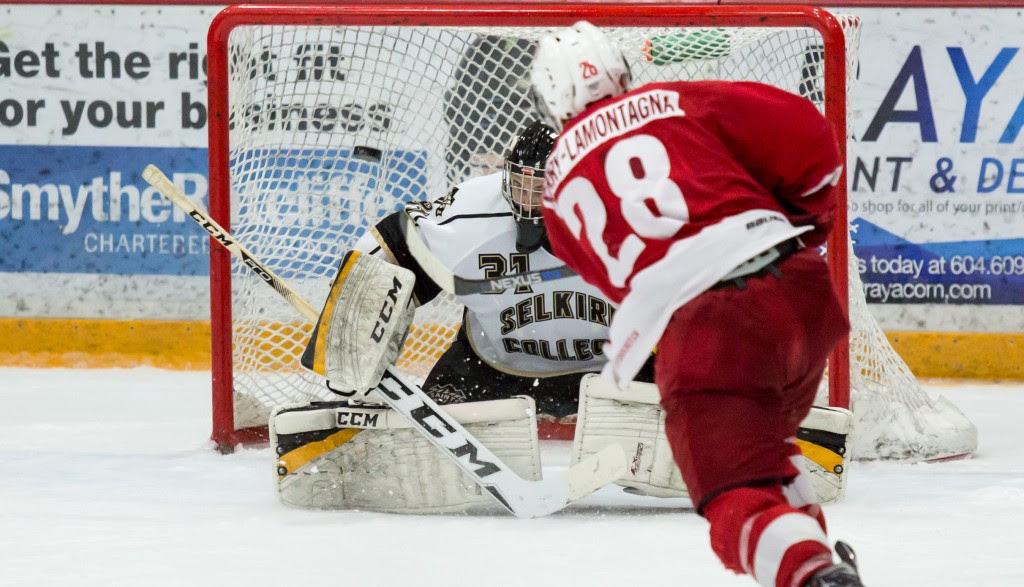 But most importantly Berry has been a great role model to his teammates and to the many local community members who know him. When Berry graduates from the SFU Environmental Science program this spring, he has not completely decided what he wants to do. By all accounts he has the talent to play professionally in Europe next season, but will not make a final decision until after his college career comes to and end in March, perhaps capped off by a BCIHL championship.

SFU closes out the regular season against rivals Selkirk College on Friday March 1st and Saturday March 2nd at Copeland Arena in Burnaby. Tickets are $8 for children/seniors and $12 for adults. For more information, please visit www.sfuhockey.com/nextgame