Canada’s Amelie Kretz stormed into the new season with a golden performance in the women’s CAMTRI race, while Stefan Daniel opened 2019 where he left off last year – on top of the Para-triathlon podium. Canadians Jessica Tuomela and Lauren Babineau, as well as Kamylle Frenette, won silver in the women’s visually impaired and PTS5 events respectively.

Kretz, a 25-year-old from Blainville, Que., led wire-to-wire in the 750-metre swim, 20-kilometre bike and five-kilometre run course to secure her first major podium in nearly four year years with a time of 56:57.

“Today was a good test to see where my fitness was at,” said Kretz. “My goal was to execute a smart race. I had a good swim and a great start, and then led the whole way.”

Leading the field of 36 athletes from around the world onto the bike course, Kretz controlled the pack to set up a run for the medals.

“We tried to get our group organized on the bike. I had to cover a few moves from one of the Americans, but I felt strong,” added Kretz. “The goal for the run was to stay patient. It was hot out there, but I felt in control and went for it on the last uphill. I surged, and the American couldn’t respond so I got a gap, and held it until the finish.”

Erika Ackerlund, of the United States, snagged the silver after watching Kretz storm away. Ackerlund punched the clock at 57:04. Australia’s Sophie Linn was third with a time of 57:24.

It is a breakthrough of sorts for Kretz, who was targeted as one of Canada’s most promising triathletes in 2013 following a World Cup victory and a bronze-medal triumph at the Under-23 World Championships. She grabbed the spotlight in 2015 when she won the national championships, and finished second at the prestigious Mooloolaba World Cup. Outside of an eighth-place finish on the World Triathlon Series in Yokohama, Japan that qualified her for the Olympics in 2016, Kretz has struggled to find her top stride on a consistent basis.

“Today was a good confidence booster but I know we’ve got so much work to do,” said Kretz. “I’ve made a big change this year by staying home and changing coaches to Alex Sereno. We have built a program around my needs with a great support team around me. It’s been great and I can’t wait for the rest of the season.”

In the men’s CAMTRI sprint race, John Rasmussen of Ancaster, Ont., was the lone Canadian to finish in the top-10. Rasmussen clocked a ninth-place time of 51:48.

Calgary’s Stefan Daniel showed no signs of rust in his first race of the new season.

The three-time World Para-Triathlon Champion was rock solid, completing the 750-metre swim, 20-kilometre bike and five-kilometre run course in a time of 58:00.5

“I came into this racing wanting to put a solid effort in throughout. I haven’t been training outside so I used this as a guage to see how the winter had gone,” said Daniel. “I felt strong on the swim, which I’ve been working on so it was encouraging to feel good in the water.”

The 22-year-old Daniel dusted the field, finishing more than three minutes ahead of the next fastest competitor.

“I had a lead going into the bike and tried to put time into the guys behind me. The run was hot, but I handled the heat well, and got through the race without any issues. It was nice to be assured that I’m in good form for this year,” added Daniel.

Jessica Tuomela and her Victoria-based guide, Lauren Babineau, celebrated a silver-medal performance in their first major competitive test this year.

Tuomela, a Paralympic swimmer from Sault Ste. Marie, Ont., used her strenths to separate herself from the women’s visually impaired field in the 750-metre swim. Tuomela and Babineau worked together to put down a solid performance, finishing with a time of 1:12:33.1.

“The first race of the season is always full of nerves and excitement. We anticipated the heat here in Florida, but was it ever hot out there,” said the Canadian duo. “We’re pleased with what we left on the race course today. It always feels good to brush off the first race of the season cob webs by getting onto the podium. It’s a solid start to 2019, and we can’t wait to show what we’ve got.”

Kamylle Frenette, of Dieppe, N.B., took Canada to the podium for the fourth time of the day, winning the silver in the women’s PTSV classification.

“It was an overall tough day on the course for me. This race is an eye opener when it comes to the level of competition in my race category,” said the 22-year-old. “I realize I have a lot of work to put in, and I’m looking forward to doing so.”

Victoria’s Jon Dunkerley and James Cook, of Summerland, B.C., finished fifth in the men’s visually impaired division after posting a time of 1:07:25.9.

Competing in her first ever race, Winnipeg’s Leanne Taylor finished fifth with a time of 1:38:49.3 in the women’s PTWC division. Involved in an accident while riding her bike in 2018 where she suffered a spinal cord injury that left her paralyzed from the waist down, Taylor continued her passion for sport by joining the Para-triathlon program this winter.

CANADIANS DRAFTED TO THE NFL ROUNDS 2-3 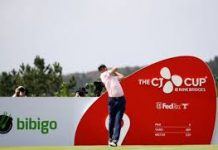