The UBC Thunderbirds earned a five-set come-from-behind victory over the Ryerson Rams to win the 2019 U SPORTS national championship Sunday night at the University of Alberta.

After dropping the first two sets to the defending champion Rams, the T-Birds sharpened up their game and never looked back, taking the last three frames to earn an eighth banner in team history, their second in the last three years.

2019 U SPORTS Player of the Year Kiera Van Ryk added to her accolades as she was named tournament MVP, leading all players in Sunday’s gold medal final with 24 kills. Third-year setter Olivia Furlan was also named a tournament all-star with 57 assists and 13 digs on Sunday, while Tessa Davis also earned a tournament all-star nod with 15 kills and nine digs in the final.

“I’m just so grateful that we were able to hang around and demonstrate our perseverance through tough situations,” said UBC head coach Doug Reimer who won his eighth gold medal with UBC and ninth overall. “No matter how long you’ve been doing this, every match is going to bring fresh challenges and this brought a whole lot of them. Ryerson was playing tremendously for two sets and we were completely back on our heels. Lots of things we did were good, but it wasn’t nearly enough so it was the patience and perseverance to keep going.”

The gold medal makes it 15 podium appearances for UBC in Reimer’s 22 years at the helm (eight gold, four silver, and three bronze).

UBC finished the game with a .245 attack percentage to Ryerson’s .197. That’s after UBC started the match hitting just .062 in the opening set. The slow momentum swing was palpable over the course of the match, eventually shifting heavily into UBC’s favour.

After their 0-3 start to the season, few would have foreseen UBC’s eventual rise to yet another gold medal, but there’s also a reason why few across the country ever discount Doug Reimer and the UBC Thunderbirds, now national champions once again. 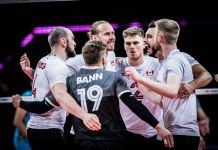 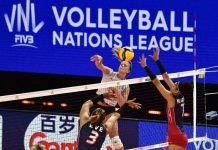