Updates on Canada Men’s Sevens team at the Hong Kong stop on the HSBC World Rugby Sevens Series on April 5-7, 2019.

Canada fell to Argentina 19-14 in their opening match of the Hong Kong Sevens.

A series of errors by the Canadian squad in the first half had Argentina up 12-0. Nathan Hirayama was sent to the sin bin for an intentional knock on just before the break, giving Argentina the man advantage.

Canada got back into the game as speedster (and birthday boy) Justin Douglas broke free for a try off a Hirayama inside ball. With Argentina down two players, Connor Braid stretched the defense and ran in for the score. Hirayama was good for both conversions but it was too little too late as time wound down and Argentina took the match, 19-14.

Unavailable due to injury 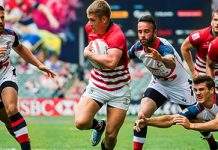