The Highlanders are pleased to announce the signing of Victory Shumbusho, pending USL league and BC Soccer approval. Shumbusho, a forward with the UBC Thunderbirds, is the second addition to Thomas Niendorf’s USL League Two squad.

Shumbusho joins the Highlanders after having just completed his second year with the Thunderbirds. His 2018 UBC campaign saw the Thunderbirds capture their second-straight Canada West title, while the Burnaby Central Secondary grad finished with six goals and two assists for a run of 14 points in 13 matches. While his offensive numbers are notable, he brings a well-rounded game Niendorf’s squad.

“Victory is a player who can definitely add goals to our team. He has good pace, he is powerful and he can be a real handful,” added Niendorf. “He is an attacking player with good defensive habits and willingness to do the dirty work in the game. Victory is a good character and high mentality player and fits the mould of player that we want to work with.”

Having moved from the Democratic Republic of Congo to Canada six years ago, Shumbusho landed in Chilliwack. From there he joined the local soccer club, Chilliwack Attack, before he was noticed by the Whitecaps Residency program in 2016.

The 2017 campaign saw him join UBC where he went on to win the 2017 Canada West Rookie of the Year. With his prowess on the ball and around the net, Shumbusho is excited to join the Highlanders for their upcoming season.

“I’m really excited to be joining the team, and coming in to work with the coaches,” stated Shumbusho.  “I’m just looking to come in, do my best, and keep developing. I’ve heard a lot of good things about the coaches, players, and the team. I’m looking forward to competing in the USL League 2 and having a successful season with Victoria.” 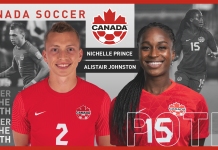