The Prince Albert Raiders fell 4-3 in overtime to the Edmonton Oil Kings in Game 2 of the Eastern Conference Final on Saturday night at the Art Hauser Centre.

Jake Neighbours scored the game-winning goal with 5:11 to go in the extra frame. The best-of-seven series is now tied at one game each.

Jakob Brook had a pair of assists for the Raiders. Noah Gregor, Justin Nachbaur, and Aliaksei Protas scored the Raiders’ goals in the loss.

The Raiders opened the scoring 3:28 into the contest. Gregor grabbed the puck following a turnover at the Oil Kings’ blueline. The San Jose Sharks prospect stepped into the zone and wired a shot past Dylan Myskiw to make it a 1-0 game with his fifth of the WHL Playoffs.

Approximately three minutes later, the Raiders doubled their lead. Brook skated the puck deep into the Oil Kings’ end. The rookie from Roblin, MB found Nachbaur alone in front of the net and the Cross Lake, MB product buried his first of the post-season at the 6:55 mark.

Late in the period, the Raiders ran into penalty trouble and the Oil Kings made them pay. Near the end of Sean Montgomery’s holding penalty, Matthew Robertson’s point shot found its way through traffic and past a screened Ian Scott to cut the lead in half with 6:02 to play in the opening frame.

With 28.4 seconds left and the Oil Kings on another power play, Robertson’s shot went off Andrew Fyten in front of the goal and through Scott to make it a 2-2 game at the end of 20 minutes.

The teams traded chances in the second period. The Raiders’ best chance came early on when Parker Kelly got behind the Oil Kings defence as he shrugged off Parker Gavlas, but the Ottawa Senators prospect was denied by Myskiw.

Early in the third, the Raiders regained the lead. Protas’ first attempt from the side of the goal was denied by Myskiw. The Belarusian forward grabbed his own rebound and converted on his second chance to give the Raiders a 3-2 advantage 2:47 into the third with his fifth goal of the playoffs.

Three minutes later, the Oil Kings drew even again. Trey Fix-Wolansky kept on a two-on-one rush and snapped a shot past Scott to make it 3-3 5:38 into the third.

Neither team was able to convert in the final 15 minutes of regulation, sending the game to overtime.

In the extra frame, Brett Leason had a puck jump over his stick with an empty side of the net. Later, Max Martin’s shot was stopped by Myskiw. Ozzy Wiesblatt was on the doorstep, but the Oil Kings netminder made the save.

That set the stage for Neighbours’ goal. The Oil Kings rookie skated down the left wing and beat Scott from the left side of the faceoff circle for his fourth goal of the playoffs.

Scott finished the game with 30 saves in a losing effort for the Raiders. Myskiw turned aside 26 Raider shots in the win.

The series now shifts to Edmonton as the Raiders and Oil Kings play Game 3 of the Eastern Conference Championship on Tuesday night at Rogers Place. Puck drop is 7 p.m.

The Eastern Conference Championship will return to Prince Albert on Friday, April 26 for Game 5 of the series. Puck drop is 7 p.m. 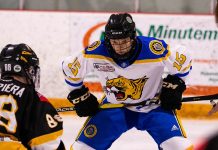 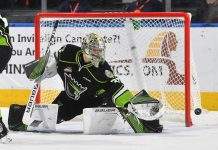