It was about as perfect a start as Tommy Wheeldon Jr. would have hoped for, as Cavalry FC took two precious away goals and a 2-0 lead over Pacific FC out of Westhills Stadium, giving his side the advantage after the first of two legs in Canadian Championship Qualifying Round 1 action.

A ninth-minute sailing header goal by captain Dominick Zator off a Nico Pasquotti long throw, coupled with a 16th minute Oliver Minatel diving head from a Pasquotti cross all but sealed the result early in the first half, which was eventually secured due to a combination of strong defending and constant attacking pressure exhibited by the visitors.

Pacific FC, starting both Issey Nakajima-Farran and Marcus Haber up top, registered just two shots on target over 90 minutes, failing to test Cavalry to adequately claw back a draw, and now head to Spruce Meadows on May 22 with a bit of a mountain to climb, needing to win by three unanswered goals in order to advance to take on Forge FC in Qualifying Round 2.

A Julian Buscher crossbar hit, coupled with another chance on goal nearly compounded Pacific’s misery on the day, but despite the scoreline, the west coast outfit wasn’t entirely overwhelmed, Victor Blasco in particular providing some late chances that ultimately fizzled out prematurely. 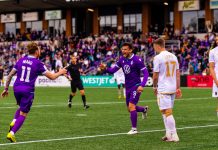