Kamloops – If this were a Hollywood movie, the hype surrounding each trailer for the 2019 BC Lions would be increasing as we get closer to the premiere showing. Yet, we are reminded that when camp opens, Grey Cup expectations are the norm across the entire country.

Perception also doesn’t automatically meet reality. These Lions, however, would prefer to approach the franchise’s 66th regular season by embracing the target on their backs.

A two-time Grey Cup champion as a member of the Calgary Stampeders’ coaching staff, Claybrooks has no qualms about beginning his head coaching chapter with said hype. He also knows Grey Cups aren’t awarded simply for excellent work reshaping one’s roster in the offseason.

“But I don’t think anybody is going to have higher expectations than we do of ourselves. We have a high standard around here and that’s the standard that we’re going to coach with and that’s the standard that we’re going to play with. That’s going to be BC Lions football. We just want to take advantage of that and keep getting better every day, brick by brick. Every year is a new challenge and you have to build your foundation from the ground up and luckily we’re in Kamloops, away from all of the distractions. It’s just us. You get to bond and form your friendships and relationships.” 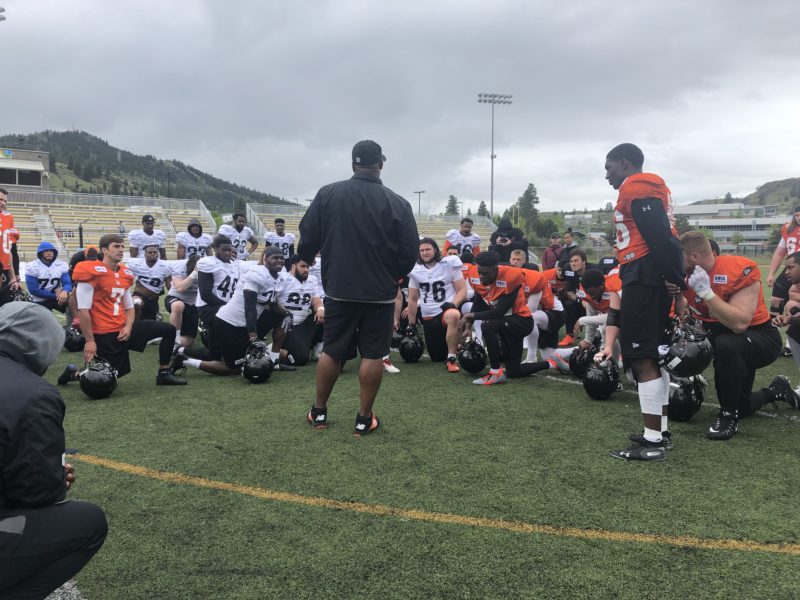 Reilly is back in Kamloops after a six-year hiatus and not much has changed about the stellar venue since he was last here as an understudy to Travis Lulay. The quarterback himself? His move to Edmonton saw him develop into the game’s top passer and he has returned to the west coast as a proud husband to wife Emily and father to two young girls. Being a family man has not reduced his competitive drive one bit and he echoed the thoughts of his head coach about Kamloops being a great place to start the journey.

“You can’t get away from each other and all you do is football, all day long,” said the quarterback in his final media availability before departing.

“That’s when you really start to try to build a championship team.”

Aside from getting re-established in the community and going over the offence with Jarious Jackson and his staff, Reilly has put a lot of screen and personal time in with his receivers, namely Duron Carter, Bryan Burnham, Lemar Durant and Shaq Johnson. Still, being on the field with everybody at the same time is a process that can’t be topped when it comes to getting ready for the grind.

“At some point, you get sick of each other and you want to get away from each other and that’s when the little fights start breaking out and things like that, but that’s all part of it,” added Reilly.

“That’s why it’s great to have camp off-site where guys can really just focus 100 per cent on football and the downtime that you have in between meetings and practices and things like that. That’s when you build that type of chemistry and things like that with teammates. I think we’ve done a lot of good work leading up to it, but there’s only so much you can do February through May until you really get out on the field and start working together in a football environment.” 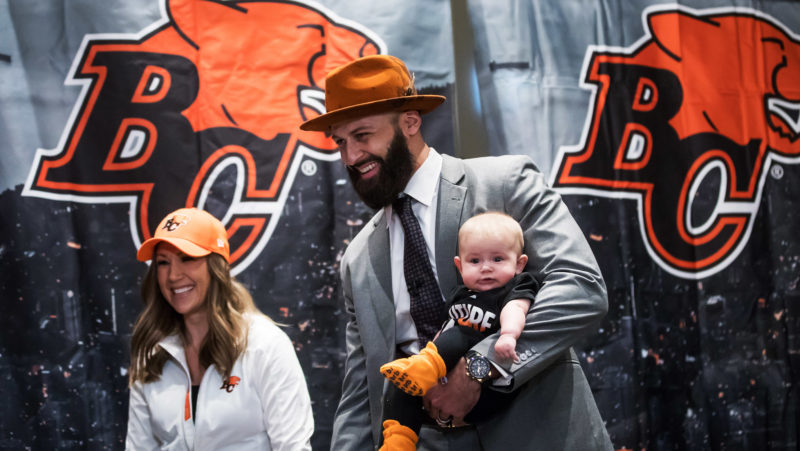 He has spent the last few years trying to find ways to stop the quarterback, now Claybrooks can’t wait to have number 13 at his disposal for a change.

“Having Mike in the building is a great asset,” said Claybrooks.

“Just the leadership qualities and capabilities of him just taking ownership of the group and holding them to a high standard. The standard that we’ve set is our standard. That’s what we expect of those guys and he has fallen right in line. It’s been a great pickup. I have high expectations of him as well.”

Once Sunday rolls around, Claybrooks will have exactly six days to prepare his players for a pre-season tune-up in Edmonton. That should ramp up the intensity even more.

“It’s a fine line that you have to manage, I guess,” he said.

“We have to get the players ready but not run them into the ground. You want to make sure you implement the system enough to get you through a game and be able to evaluate your guys at the same time. It’s a good test of your management skills. We’ll deal with that accordingly. When life gives you lemons, you make lemonade.”

“I expect it to be a lot of hard work,” added Reilly.

“With DeVone coming in and bringing in a lot of new guys, it’s going to be different than what I’ve been dealing with for the last three years with coach Maas and his staff. I’m excited to learn and I like to see things from a different perspective and I’ll get that from this staff.”

Buckle up. The movie is about to premiere.

Besides for the aforementioned starting quarterback, the argument can certainly be made that not every position on the depth chart is set in stone. That’s what the grind of training camp is all about. We present you with a few key battles to keep an eye on between now and June 5th. And rest assured, there will be a few more to talk about along the way.

It has been asked a bit more as we’ve gotten closer to this weekend: who will be right behind Reilly on the depth chart? Ricky Lloyd returns after a strong showing in 2018 camp which preceded him suiting up in a pair of regular season contests. Newcomers Austin Apodaca (New Mexico State, pictured below) and Cole Sears (Arkansas-Monticello) both faired well in mini-camp and will look to make the competition behind Reilly interesting.

Apodaca has attended training camp with Winnipeg (2017) and dressed in four games as a backup with Montreal last season. Sears is coming off four productive college seasons and led Arkansas-Monticello to an appearance in the Corsicana Bowl, his school’s first bowl game appearance in 25 years. 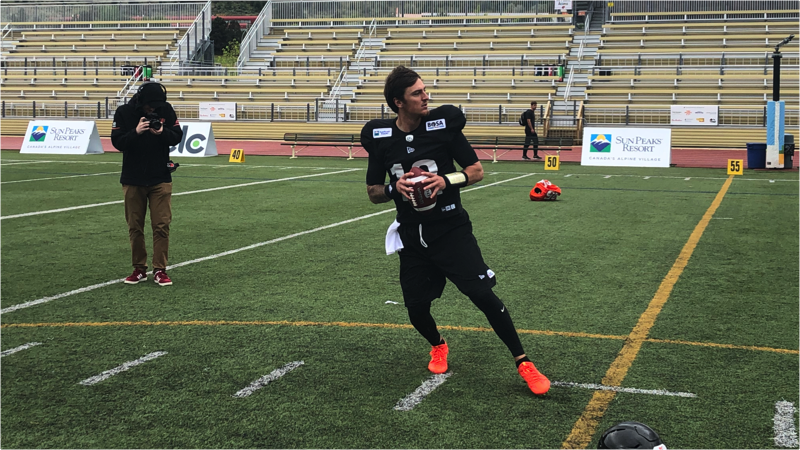 Before the long-awaited addition of 2015 draft pick Brett Boyko earlier in the week, this would have been a much more intriguing battle to keep an eye on. It still may be to some extent. Boyko will be considered the favourite to start at the position vacated by six-time CFL All-Star Jovan Olafioye but should rust come into play for the former Philadelphia Eagle and San Diego Charger, candidates for important reps includes Eastern Washington grad Cassidy Curtis and former Temple Owl Eric Lofton.

On the subject of the offensive line: this also allows the potential to start four Canadians up front. Port Coquitlam’s Sukh Chungh is all but pencilled in at right guard, while seven-year veteran Hunter Steward looks to once again earn a spot on the left side beside tackle Joel Figueroa. The centre position is also interesting: with Peter Godber still recovering from a foot injury, Andrew Peirson will get plenty of starting camp reps ahead of 2019 draft pick Jonathan Harke. This much is certain: the all-important Canadian depth at offensive line is better than its been in years.

2018 brought about short-term experiments with Gabriel Knapton and Shawn Lemon, both via trade. With Lemon back in Toronto, it’s anybody’s guess who plays the role of opposite bookend to Odell Willis. A couple of early candidates include Ebo Ogundeko who spent much of last season on the practice squad and Darius Allen who was brought back after spending the 2016 season in orange. Allen notched four defensive tackles and a sack in 11 appearances that year.

With TJ Lee III and Aaron Grymes holding down the to halfback positions, who starts at each corner position is something that will be determined over the course of training camp. There will be an option for one of them to be occupied by a Canadian with free agent addition Josh Woodman and returnees Nate Hamlin, Isaiah Guzylak-Messam and Dom Termansen all in the mix. Former Tiger-Cat Keon Lyn and Cal-Berkely product Marloshawn Franklin represent a couple of the Americans vying for spots.

Replacing Ty Long, last year’s finalist for Most Outstanding Special Teams Player, will not be an easy task. Canadian and former Argonaut and Redblack Anthony Alix will duke it out with American rookie Lane Clark for the kicking duties. As for the return game? That’s anybody’s guess. The squad has a combined four punt returns on the roster from last year: Shakier Ryan (3) and Bryan Burnham (1). Time for a newbie to shine.

An Ode To Rolly…

The club said goodbye to another long-serving foot soldier Friday, waiving 11-year veteran fullback Rolly Lumbala. Chalk it up to another difficult business decision for Hervey and the brass. Lumbala’s toughness and leadership will be missed, but the squad now must turn to the likes of David Mackie, Wayne Moore and new draft pick Mario Villamizar to pick up the slack at that position.