Cassidy Curtis has also proven to be versatile both on and off the football field.  You can verify that by going down the list of offseason jobs he has held over the years in his hometown of Denver. They range from selling cars at his local Mercedes Benz Dealership, Amazon delivery driver, security guard and a moving company.

“Any time I go back home, my wife remarks that they’re probably going to run out of jobs for me to take (laughs).”

This past winter, he did something that suits him quite well if you notice how big he is…..

“I was working for a forestry company, basically a glorified lumberjack,” chuckled Curtis.

“I was cutting down trees and stuff like that, which is great but nothing compares to being out here on the football field. ”

Curtis reported to 2018 Lions training camp like many other unknown commodities before him. Yet the 6’4, 305-pound lineman out of Eastern Washington was on his way to earning a roster spot as the squad was looking for depth at the right tackle position. And then it all came crashing down when he suffered a lacerated kidney, no small ailment for someone who regularly takes and receives body shots.

“It was a little scary to hear what the actual injury was,” recalled Curtis.

“I didn’t realize what was wrong until I went to the bathroom.

“When it happened, I didn’t really think too much of it. I had the wind knocked out of me and thought maybe I cracked my ribs. It was like, ‘no problem, I can play through that.’ And then I really didn’t realize what was wrong until I went to the bathroom. After I went to the hospital and they told me the test results, I was a little bit worried. But I knew that I was going to come back from it and it was God’s will. It wound up being a learning experience.” 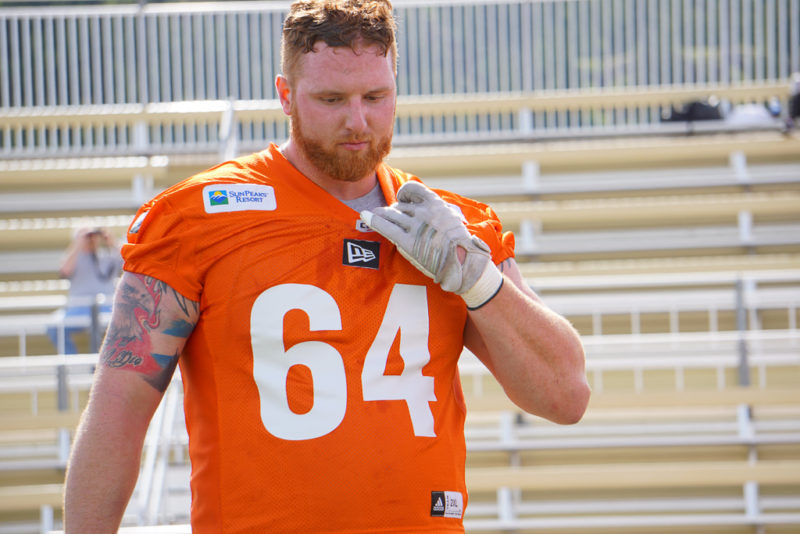 He got healthy quick enough to be added back to the practice roster as part of last September’s expansion period. Now that he’s back in Kamloops, Curtis is once again entrenched in quite the competition for a spot at right tackle. That was only heightened when 2015 first round pick Brett Boyko arrived and gave the club a little more ratio flexibility on the offensive line. Given how he was able to recover from last year’s setback, Curtis has learned to embrace the stiff competition and take what he learned in that brief first appearance in Kamloops as well as his 2017 training camp experience with the Eskimos. Will the third time be the charm?

“When it’s your first training camp you’re just trying to get the feel of everything,” he said.

“You’re not sure what to expect, it’s different from college and you’re just trying to get your feet wet. The second time around, you’ve got some more relationships. Figueroa was a guy that had also helped me in Edmonton and then coming here he is just a guy that I look up to in terms of his knowledge and the way he breaks things down. His nastiness and the way that he plays is just something any tackle would want to resemble. Having him, continuing that relationship and being able to learn from all of these other guys has just been the biggest blessing. I just want to move up as much as I can and help this team win a Grey Cup.”

Curtis spent four seasons on the Eastern Washington campus, leading the Eagles to three consecutive Big Sky Conference titles and FCS playoff appearances in each of those seasons. Along the way, he helped shut down DeForest Bucknor and the Oregon Ducks to help his Eagles pull off a massive upset victory.

It was at Eastern Washington where he met his wife Katrina who represented the Eagles on the tennis court. The couple eloped in two years ago and then had their family wedding celebration in Denver just prior to him arriving in Kamloops last May. It was all part of the whirlwind that ended in his season being cut short. Now he can’t wait to continue to prove himself before camp breaks in the first week of June.

“One of the goals is to continue to prove we can be the best offensive line in the league and our number one priority is keeping Mike on his feet,” said Curtis.

“Competition always breeds success. I’m just excited. Any way that I can contribute to this team accomplishing its goal is a priority.”

And of course, it never hurts to have a lumberjack on your side.