VANCOUVER, BC Ali Adnan opened his Whitecaps FC account with an MLS Goal of the Year candidate, and Lucas Venuto tallied the eventual winner in a 2-1 win against FC Dallas on Pride Night at BC Place on Saturday. 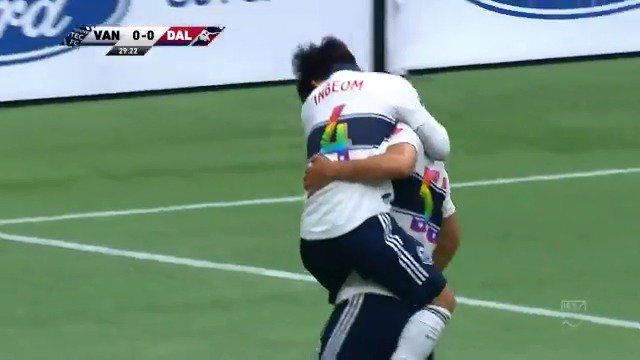 Maxime Crépeau was back in the crease, as head coach Marc Dos Santos made six changes to his starting lineup from Wednesday’s draw in New York. Fullback Jake Nerwinski, midfielders Russell Teibert and Inbeom Hwang, along with Lucas Venuto and Fredy Montero all slotted back into the starting XI.

In what was a fairly tame first half-hour of play, it was Ali Adnan that got BC Place on their feet. Running at two FC Dallas defenders, the Iraqi national split the defence before curling an absolute wonder goal into the upper right corner to open his MLS account.

Just 10 minutes later, it was the ‘Caps striking again as FC Dallas could not properly clear a Nerwinski cross into the box. Montero came to clean up the crumbs, as he back-heeled the ball to an open Venuto, who snuck the ball past FC Dallas keeper Jesse González and into the net to take a 2-0 lead into the half. However, Adnan would not be able to finish the first half, as he left for the locker room early with a groin injury.

Chances for both sides to start the second half, as Inbeom Hwang’s interception led to a chance for Venuto in the box, but his pass for an open Montero was snuffed out by the Toros, who quickly hit the ‘Caps on the counter. Racing down the right hand side, Michael Barrios played a ball along the carpet that fell to the feet of Pablo Aránguiz, who had an open net but fired his attempt into the crossbar, with the rebound ricocheting safely into Crépeau’s hands.

In the 70th minute, Homegrown striker Theo Bair came on for Montero to make his professional debut. It didn’t take long for the 19-year-old to make an impact, as just five minutes into his debut he was on the end of a Nerwinski cross, showing his quality by striking the volley on target but not past the FC Dallas keeper.

It was a tense final few moments, as FC Dallas drew one back in the 85th minute after Dominique Badji fired a shot towards the near post and past Crépeau, however it wasn’t enough as the ‘Caps held on to secure all three points.

Whitecaps FC now look forward to Friday, May 31 when they host Canadian rivals Toronto FC at 7 p.m. PT. The club will commemorate the 40th anniversary of the 1979 NASL Soccer Bowl championship team. 16 members of the ’79 team will be in attendance and recognized prior to kickoff.