If you didn’t know the players on an inexperienced Finnish national team before this World Championship, you most certainly do now. This collection of apparent unknowns and never-played-befores defeated Canada 3-1 to win their second gold in as many hostings by Slovakia, the previous win coming in 2011.

It was their third gold all time, the first coming in Sweden in 1995.

“It’s awesome,” enthused Toni Rajala. “It’s something that you know might only happen once in your life, but even before the game it felt great. I wasn’t too nervous about it; I was enjoying it. The team played an awesome game again. We played together, played 60 minutes. Kevin was awesome in the ne;, we were blocking shots. They were good today, but we were a little bit better. Three goals was enough.”

Anttila has saved his best for last here in Bratislava. He scored four on Finland’s final six goals, including the late tying marker against Sweden in the quarter-finals, the winner against Russia in the semis, and two of three today.

But perhaps the greatest credit should go to coach Jukka Jalonen, who selected this group of players, many of whom had no international or World Championship experience, and got them to play as a team, play a combination of stifling defence and timely offence. To him go the highest kudos.

“It was a long tournament, a lot of fun, a lot of good guys,” said Canadian defenceman Damon Severson. “I think we deserved a medal. We had some spells where maybe we didn’t, but overall we played a really good tournament. It’s unfortunate we got the wrong medal. Finland played a good game, the only team to beat us in this tournament was them, twice, and they played some good hockey. It’s unfortunate we’re not going home with gold.”

Indeed, Canada started and finished the tournament the same way, losing to the Finns by a 3-1 score. In between, they won eight games in a row.

“It’s an amazing feeling,” added Jere Sallinen “I don’t even know how we won; it’s unbelievable. We’re a pretty good hockey country. Maybe it’s a miracle on ice, something like that. Going back to Helsinki is going to be amazing. I think there’s a lot of people waiting there for us. Anttila – he’s a beauty.”

The first period was a rough-and-tumble affair as the Finns, in particular, wanted to introduce a physical element to the game. Pushing and shoving was all too common after whistles, and it was Canada that got the first power play as the result of an over-aggressive check in the offensive end by Anttila.

Yet on the ensuing power play, Canada surrendered a penalty shot after Troy Stecher gave up the puck at the Finland blue line. Jere Sallinen broke up ice on a clear break, but he was hauled down. Oliwer Kaski took the shot, but it went off Murray’s left pad and hit the end boards harmlessly.

“I forgot about that penalty shot already,” a jubilant Kaski said after. “Of course, you’re not that happy when you miss a shot in the finals, but the guys supported me, and it didn’t matter because we knew we were going to win.”

Soon after, Juho Lammikko almost created another breakaway with his speed, thus giving Canada a sense of what Finland is capable of on the counter attack. Nevertheless, the only goal of the opening 20 minutes came from Canada.

Anthony Mantha made a great play just inside the Finland line, stick checking Toni Rajala and allowing defenceman Shea Theodore to claim the loose puck. Theodore curled in on goal and drilled a shot over Lankinen’s glove at 10:02.

Near the end of the period, Philippe Myers wired a long shot off the crossbar behind Lankinen, but the puck stayed out. Finland didn’t have much in the way of clear chances besides the penalty shot.

The second period could be neatly divided into two not quite equal parts, the first dominated by Finland and the second by Canada. In Finland’s half, Suomi managed to tie the score, thanks to an early power play. Anttila’s quick shot from the right faceoff dot snuck between Murray’s pads at 3:35, sending the pro-Finland crowd into a frenzy.

Canada weathered the storm, and was lucky to be in a tie game, but slowly and surely the Canadians started to get the puck into the Finland end and maintain possession for periods of time. Kyle Turris hit the post, but the period ended in a fair, 1-1 game.

Crazily enough, Anttila got the go-ahead goal in the third at the exact same time as his goal in the second–3:35. It came off a bit of good fortune as Canadian defender Damon Severson lost his stick behind the goal. Veli-Matti Savinainen was right there and got the puck out front to Anttila, who lifted a shot over Murray’s shoulder.

With that goal Finland played a dangerous game of sitting on the lead. Canada was relentless on the offence, and Mark Stone, the tournament’s leading goalscorer, had a great chance from the slot but snapped a shot right into Lankinen’s chest. Most of the rest of the game was played in the Finnish end, but the entire team blocked more shots than Lankinen perhaps.

And then, on a harmless-looking play, Pesonen flicked a shot on goal that Murray didn’t see. It beat him on the short side, and that 3-1 lead was all Finland needed. 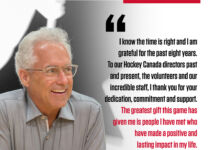