The Victoria HarbourCats (7-5) rallied in the sixth to overcome an early deficit and defeat the Bend Elks 5-3 Monday night on Claire Eccles Jersey Retirement night at Wilson’s Group Stadium at Royal Athletic Park. 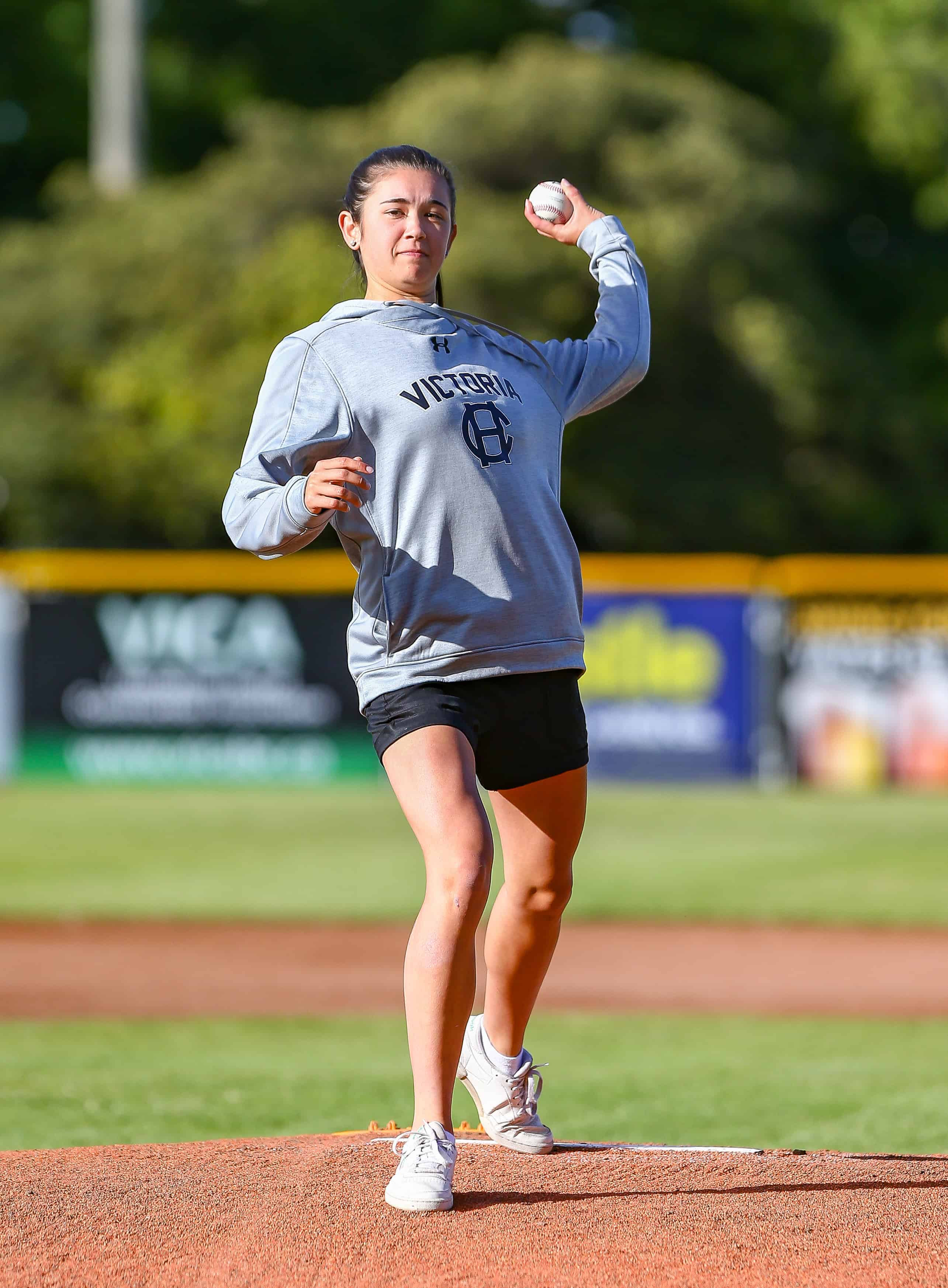 Eccles, the first female player in West Coast League history, who went 2-0 with three strikeouts in two starts and nine relief appearances with the HarbourCats in 2017 and 2018, was presented with a picture frame and commemorative jersey during the pregame festivities.

Hunter Hennigh made his third start of the season tonight for Victoria, and relied on some phenomenal defence from his teammates in the field in his longest outing of the year. After loading the bases in the first, Hennigh escaped the jam when Elks infielder Brad Morgan blasted a hard grounder right back to the mound that resulted in a 1-2-3 double play. 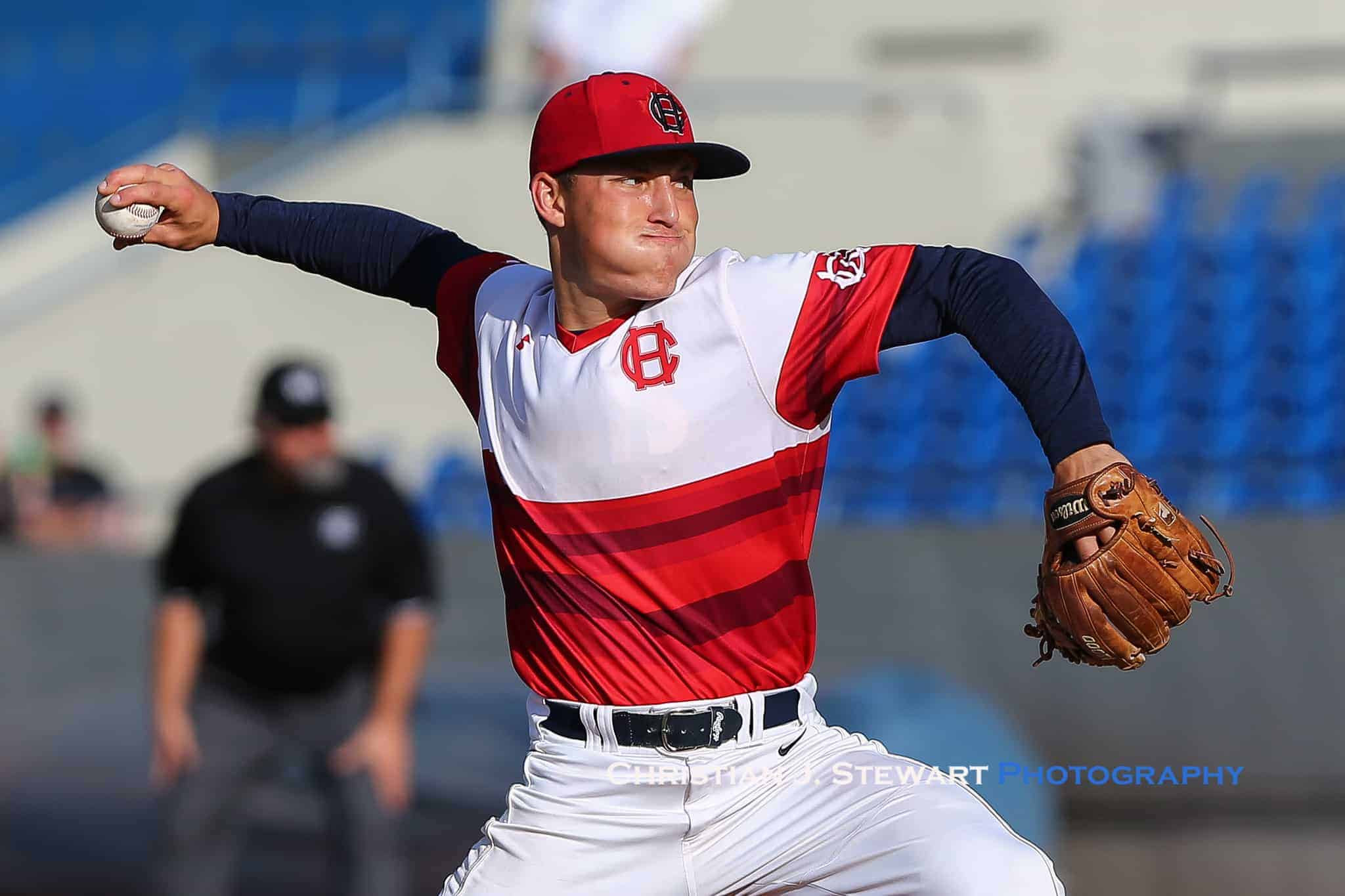 Hunter Hennigh would go a season high 3 1/3 with a strikeout and only one earned run given up tonight. (Photo by Christian J. Stewart)

Bend wouldn’t be denied in the top half of the second, however, as Efry Cervantes led the frame off with a single, and Gabe Gonzales doubled him home two batters later to give the Elks an early one run lead.

Michael Hansell got the call for the Elks in the series opener, and stifled the HarbourCats through five innings—racking up five strikeouts, and allowing only five hits on the night. 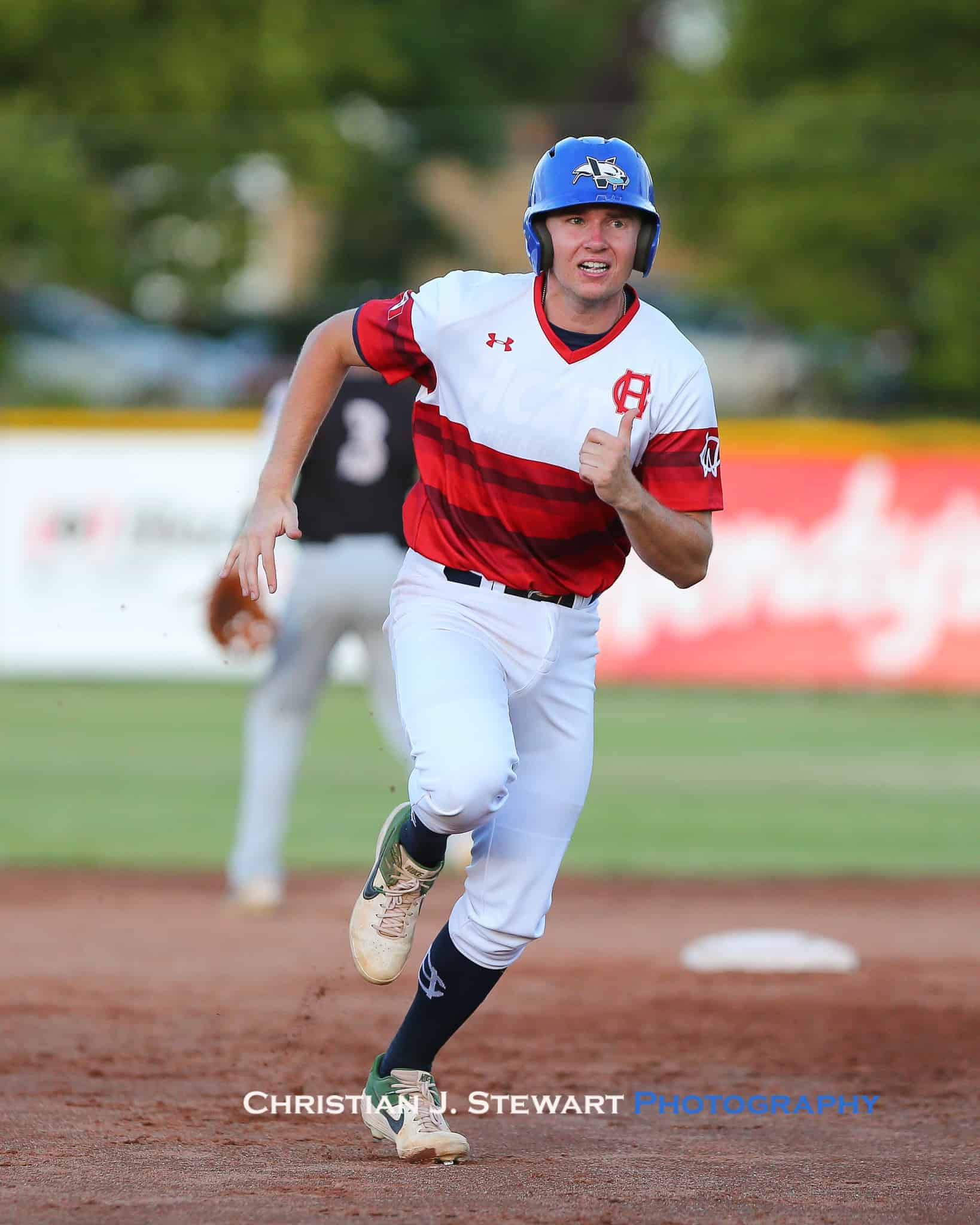 Chase Wehsener’s two-run homer in the seventh helped break open the game, and give Victoria the win against Bend. (Photo by Christian J. Stewart)

The Elks offence doubled their lead in the fourth, and gave their starter some more run support, with a Nathan Padilla RBI single that capped off three consecutive singles in the frame.

Victoria didn’t record a hit until the third, but finally broke through one inning later, when a pair of singles helped load the bases off Hansell. Tyson Hays then launched a long sacrifice fly to right field that cut Bend’s lead in half, and ended the Elks’ scoreless defensive inning streak at 18 innings. One batter later, Tanner Rempel followed his teammate up with an RBI single to level the game at two. 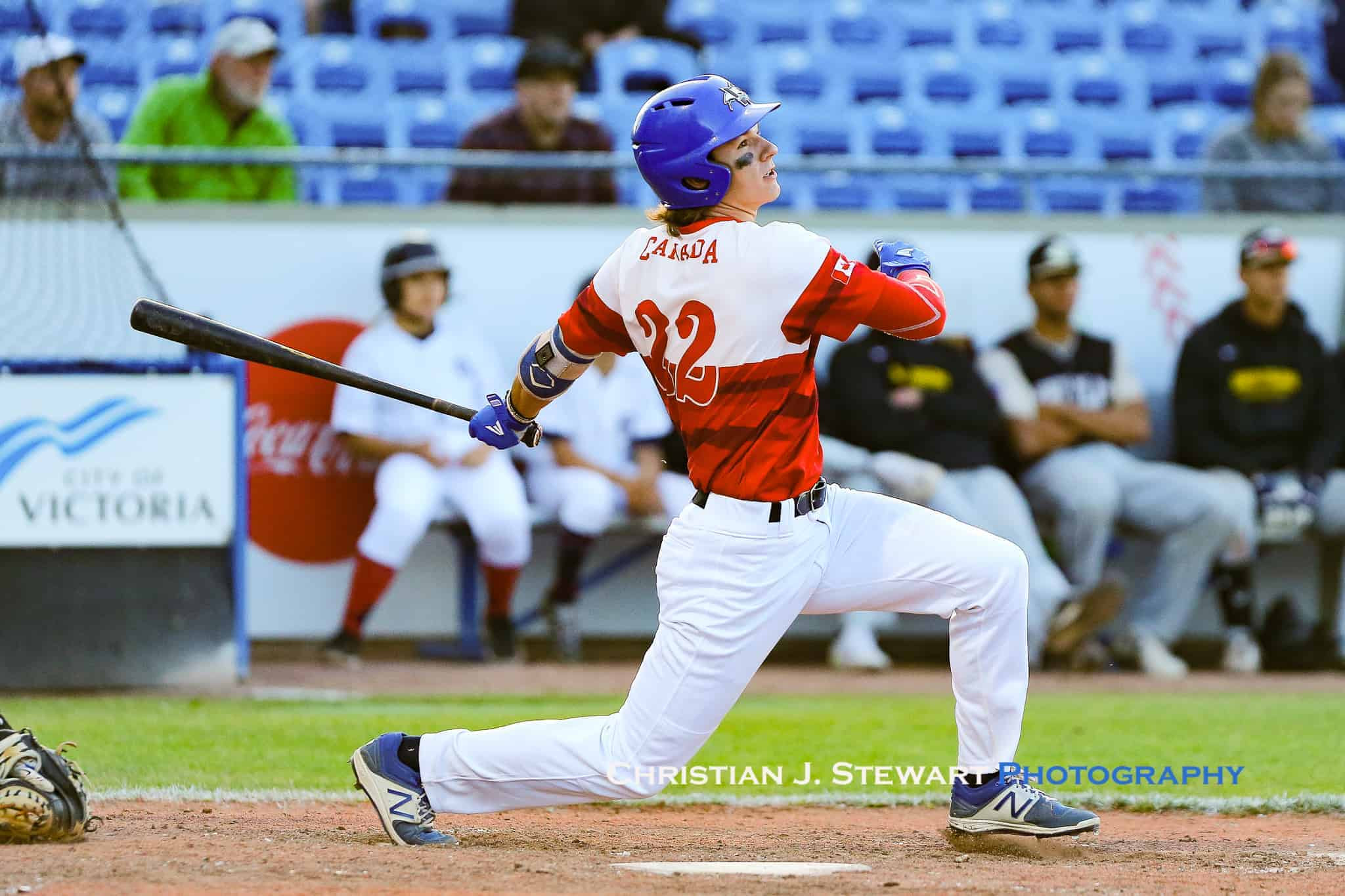 The HarbourCats then took the lead with a rally the sixth, ignited by Victoria native Jason Willow. In his 2019 season debut, Willow collected his first hit in the sixth when he bested fellow Victorian Brendan Turcotte on the mound. Turcotte, pitching for the Elks, and Willow are Lambrick Park high school graduates, and former players for the Victoria Eagles and Mariners junior teams respectively.

Turcotte got a double play to avoid any further damage in the sixth, and ended his outing with only two hits and a run in his only inning pitched. However, Chase Wehsener broke the game open in the seventh with a two-run homer to propel Victoria ahead by three. 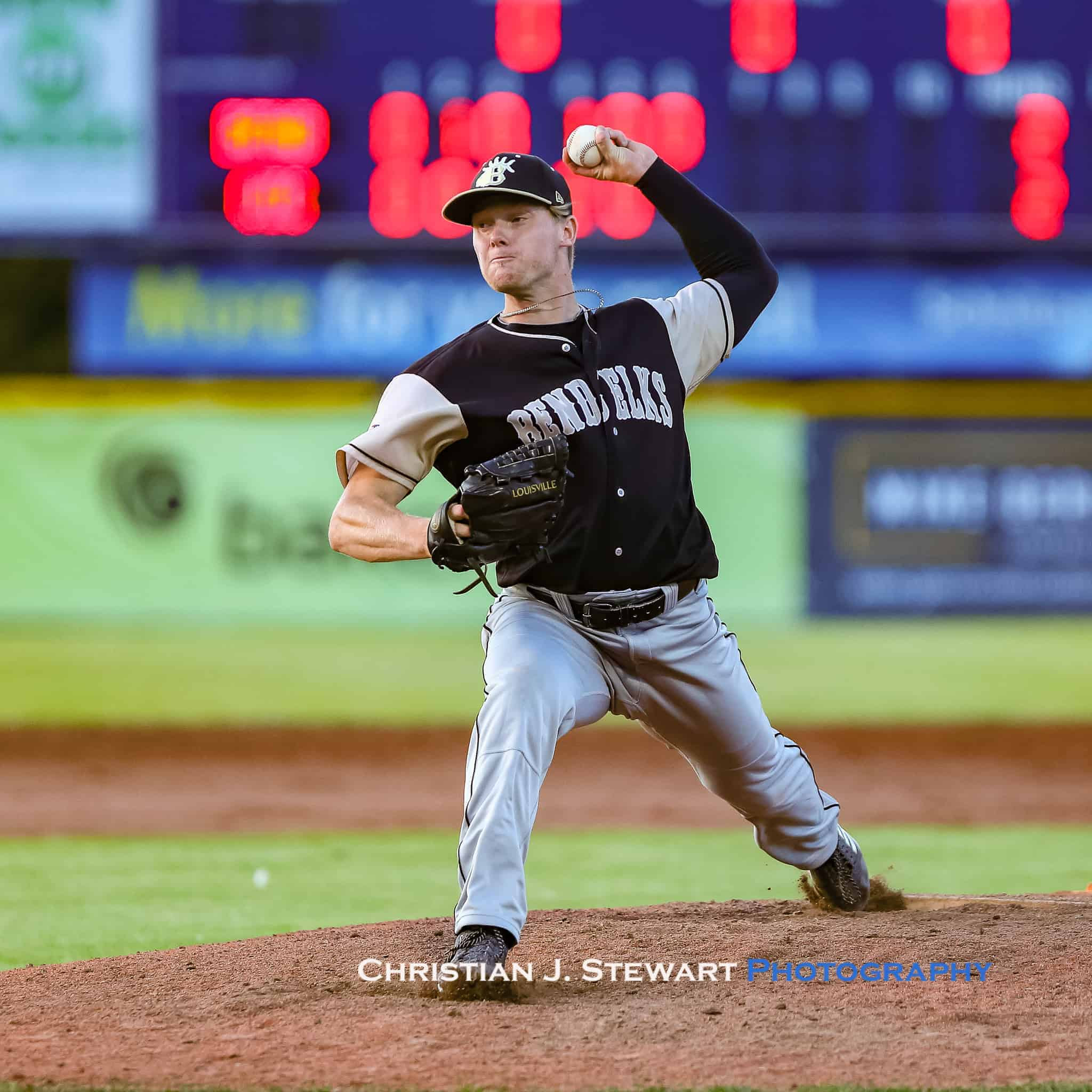 Lambrick Park and Victoria Eagles alumn Brendan Turcotte allowed only two hits in his one inning of work in his hometown. (Photo by Christian J. Stewart)

Bend added a run in the eighth to make things interesting, but closer Matt Amrhein came on in the ninth to collect the save and give Victoria their seventh victory of the season.

The win brought Victoria to within a game of the Bellingham Bells atop the First Half North division standings, and ended the Elks three game win streak. The HarbourCats will go for the series victory tomorrow night, and their sixth victory in eight games. First pitch is scheduled for 6:35.