Two years ago, 2017,Melissa Humana-Paredes and Sarah Pavan had begun their new partnership in brilliant form: bronze in Gstaad, silver in Rio and Olsztyn and, memorably, gold at the Poreč Major on Canada Day.

Then came the World Championships in Vienna: fourth.

And then came the World Tour Finals in Hamburg: fourth.

Fourth. So near yet so far to a shiny metallic disc of happiness. Instead, fourth. No places on the podium and definitely no champagne showers.

This year, in Hamburg, at a World Championships, four is a number that Melissa and Sarah will use as encouragement.

There will be no fourth this time.

“Finishing fourth in Vienna was the worst – it’s definitely motivation this year,” says Humana-Paredes, patiently doing her best not to be angry with a line of questioning about fourth fourth fourth.

“To be one of the favorites going into that tournament and to not be on the podium gives us fire in our bellies to do better this time around. There’s a lot we’re looking forward to in Hamburg. We also have an eye on the Olympics let’s not forget.”

In both bronze medal matches in question, the duo were beaten by legendary Brazilian pair Larissa Franca and Talita Antunes.

And although the South Americans stars will not stand in their way in Hamburg, there are plenty of other teams lying in wait to challenge the Canadians for the title – and that tantalizing ticket to Tokyo.

“We like playing against the best – we know when it comes down to it we’re going to have to beat the best anyway,” says Sarah. “It’s going to be a great tournament and for sure we want to make up for fourth in Vienna.

“In the semi-final and the bronze match we had them in our hands and let both of them go which was disappointing.

“However then we were a new partnership. That was a big moment for us at the time and we learned a lot. I think we’ve grown a lot since, including the last 12 months too, and with every tournament we’ve built more to our game.

“Obviously our goal is to be World Champions and our ultimate goal takes place 14 months from now. Everything we do until that point is a step in that direction.”

Both players had experienced a World Championships before their last in Vienna, with Pavan finishing fifth in The Hague with Heather Bansley and Humana-Paredes posting a hugely respectable ninth on her debut as a 22-year-old at the same competition alongside Taylor Pischke.

For Sarah it’s a series of finishes she hopes is leading in one direction.

“It’s been a constant climb, fifth, fourth… so hopefully the trend will continue and we can get on the podium this time!” she laughs.

“We’re looking forward to the tournament so much. It’s the closest tournament we have on the World Tour to an Olympics which can help with preparation, especially with it being spread out over 10 days.

“It feels so professional, and with Beach Majors running it and making us feel like superstars – it’s going to be great!”

Mel and Sarah were drawn in Pool I alongside teams from the United States, Russia and Colombia, with their first match on Saturday, June 29 against Colombians Diana Rios and Yuli Ayala. 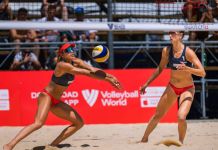 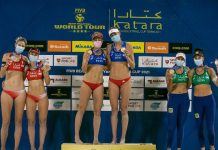