Kadri, 28, has spent his entire career with Toronto after being selected by the organization in the first round (seventh overall) of the 2009 NHL Draft. He appeared in 73 regular-season games with the Maple Leafs this past season and registered 44 points (16g/28a), tied for fifth on the team in points, ranked fifth in assists and tied for third in power-play markers (4). He added two points (1g/1a) in two contests during the 2019 Stanley Cup Playoffs.

“We would like to thank Tyson for all he has done both on and off the ice for the Avalanche organization,” said Avalanche Executive Vice President / General Manager Joe Sakic. “He certainly made an impact not only with his play but with his charitable work in the local community. We would also like to thank Alexander for his two seasons, as he helped our turnaround in making the playoffs the last two years.”

“With the arrival and emergence of Samuel Girard and Cale Makar, as well as the recent draft pick of Bowen Byram, we felt it was time to move in this direction with Tyson’s contract expiring next summer,” added Sakic.

“Nazem is a proven goal scorer and a fierce competitor who plays in all situations,” continued Sakic. “He is under contract for the next three seasons and will immediately fit right in as our second-line center and improve our scoring depth. Calle is a young defenseman with upside who has played in the AHL and has also seen some NHL time over the last two years.”

The London, Ontario, native played four seasons in the Ontario Hockey League from 2006-10, recording 258 points (92g/166a) in 242 career contests with the Kitchener Rangers and the London Knights. He added 76 points (27g/49a) in 55 total OHL postseason outings and helped the Rangers win the J. Ross Robertson Cup as league champions in 2008. He served as an alternate captain during the 2009-10 campaign and was named to the OHL All-Star team, earning OHL Second All-Star Team honors at the end of the season. Kadri made his NHL debut that year, appearing in his first contest on Feb. 8, 2010 vs. San Jose.

Rosen, 25, has split the last two seasons in the Toronto organization, helping the Marlies win the 2018 Calder Cup as AHL champions. He recorded 46 points (7g/39a) in 54 games during the 2018-19 season, finishing tied for seventh among league defensemen in scoring. The 6-foot-1, 186-pound blueliner suited up in four games for the Leafs this past season and scored his first NHL goal in his season debut on April 1 at the New York Islanders.

Calle Rosen skates with the Toronto Maple Leafs against the Tampa Bay Lightning at the Scotiabank Arena on April 4, 2019 in Toronto, Ontario, Canada. Mark Blinch/NHLI

A Vaxjo, Sweden, native, Rosen spent parts of five seasons playing professionally in Sweden for the Vaxjo Lakers of the Swedish Hockey League and Rogle BK and Karlskrona HK in Allsvenskan, the second-highest professional league in the Swedish ice hockey system. 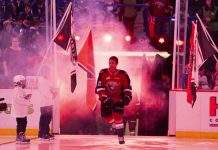 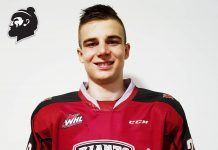 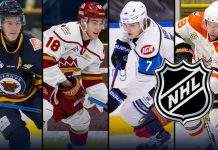