With one game remaining in the First Half schedule, Bellingham (16-10) and Victoria (17-9) will close out the early slate in the series finale tomorrow. With a win the ‘Cats can still clinch the division and their third playoff berth in four seasons, however, if the Bells win, they will clinch the playoff spot and North division crown. 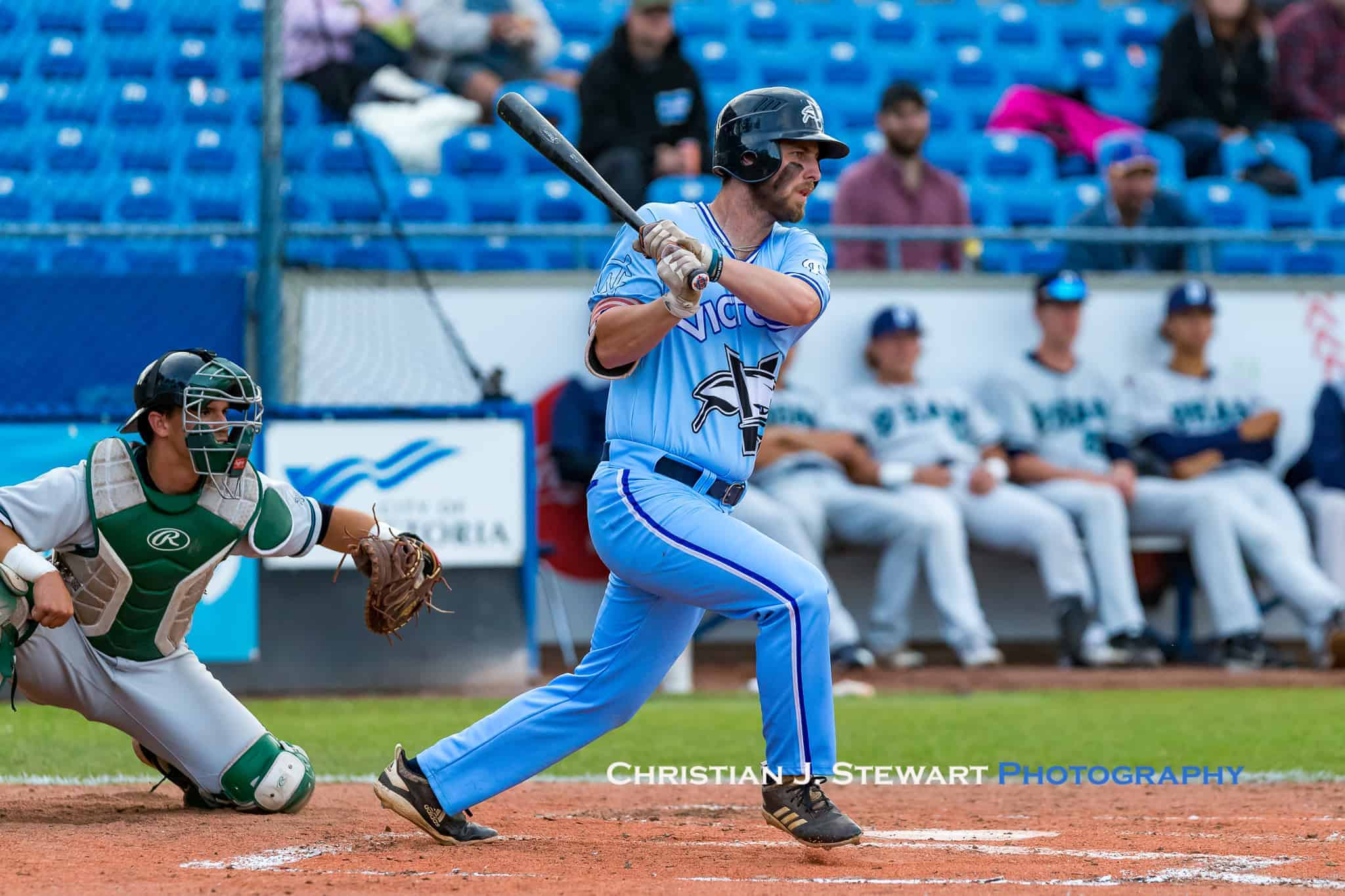 Griffin Paxton gave the HarbourCats their first hit of the game in the fifth. Paxton was also able to draw a walk tonight. (Photo by Christian J. Stewart)

Both Hyde and Bells’ starting pitcher Logan Hatley were dominant in their starts at Wilson’s Group Stadium at Royal Athletic Park. Hyde would carry a no-hitter into the sixth, while his counterpart held Victoria hitless through five frames.

The HarbourCats offence, despite the pitching prowess on both mounds, had a chance to draw first blood off Hatley in the second inning. 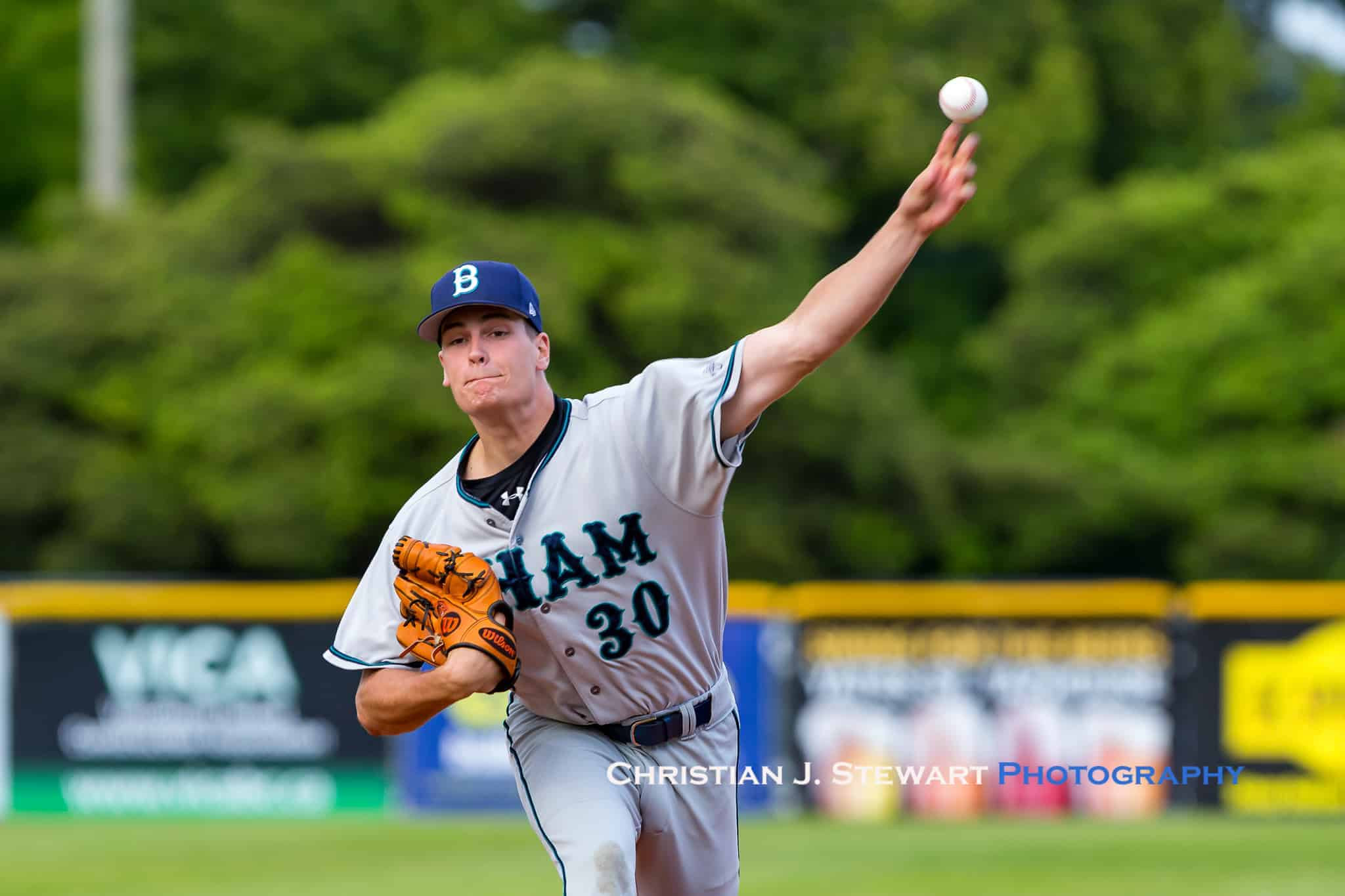 Following a 1-2-3 first inning, Frankie Niemann drew a walk off Hatley to start the second frame. Niemann then advanced into scoring position with a wild pitch, and to third two batters later courtesy off a Griffin Paxton fielder’s choice.

90 feet away from giving their starter some run support, Nate Pecota couldn’t bring Niemann home, as Hatley ended the threat with a strikeout.

On the opposing mound, Jack Hyde was in cruise control. The righty held Bellingham hitless through five innings, before Hyde lost his no-hit bid in the third time through the Bells order. 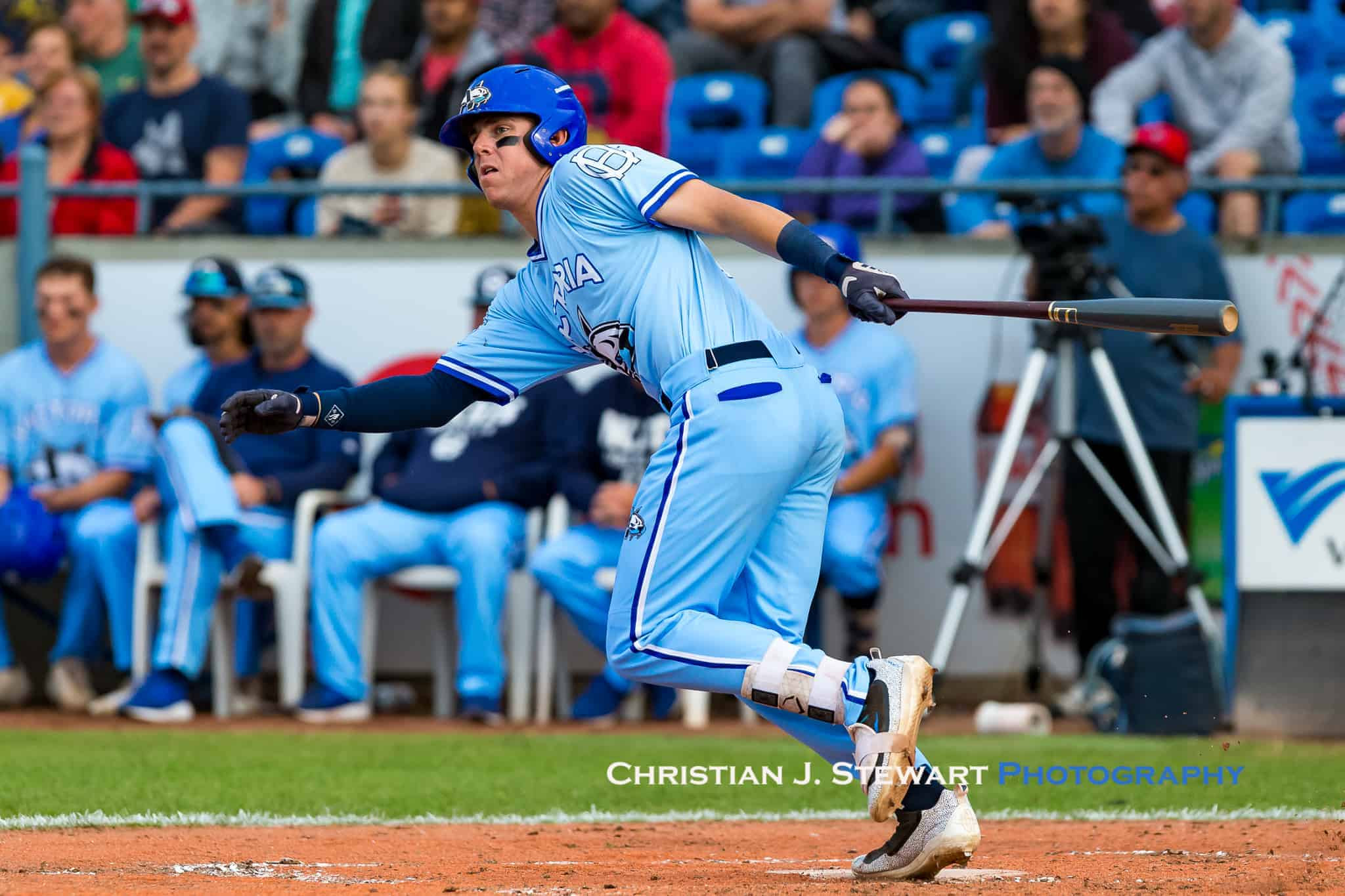 Harrison Spohn prepares to sprint towards first, after staring down his liner, in an earlier inning tonight. (Photo by Christian J. Stewart)

Hyde, who will be an incoming freshman for the University of San Diego Toreros in the fall, retired 11 consecutive Bells from the second to the fifth before running into trouble into the sixth inning. With the top of the Bellingham order due up, Derek Marshall led the frame off with a walk and Collin Burns drew a four-pitch walk to put two Bells on.

Hyde would then strikeout Austin Kretzschmar, but one batter later Guthrie Morrison launched the first Bells hit of the game off the scoreboard in left field to jump Bellingham in front by three. 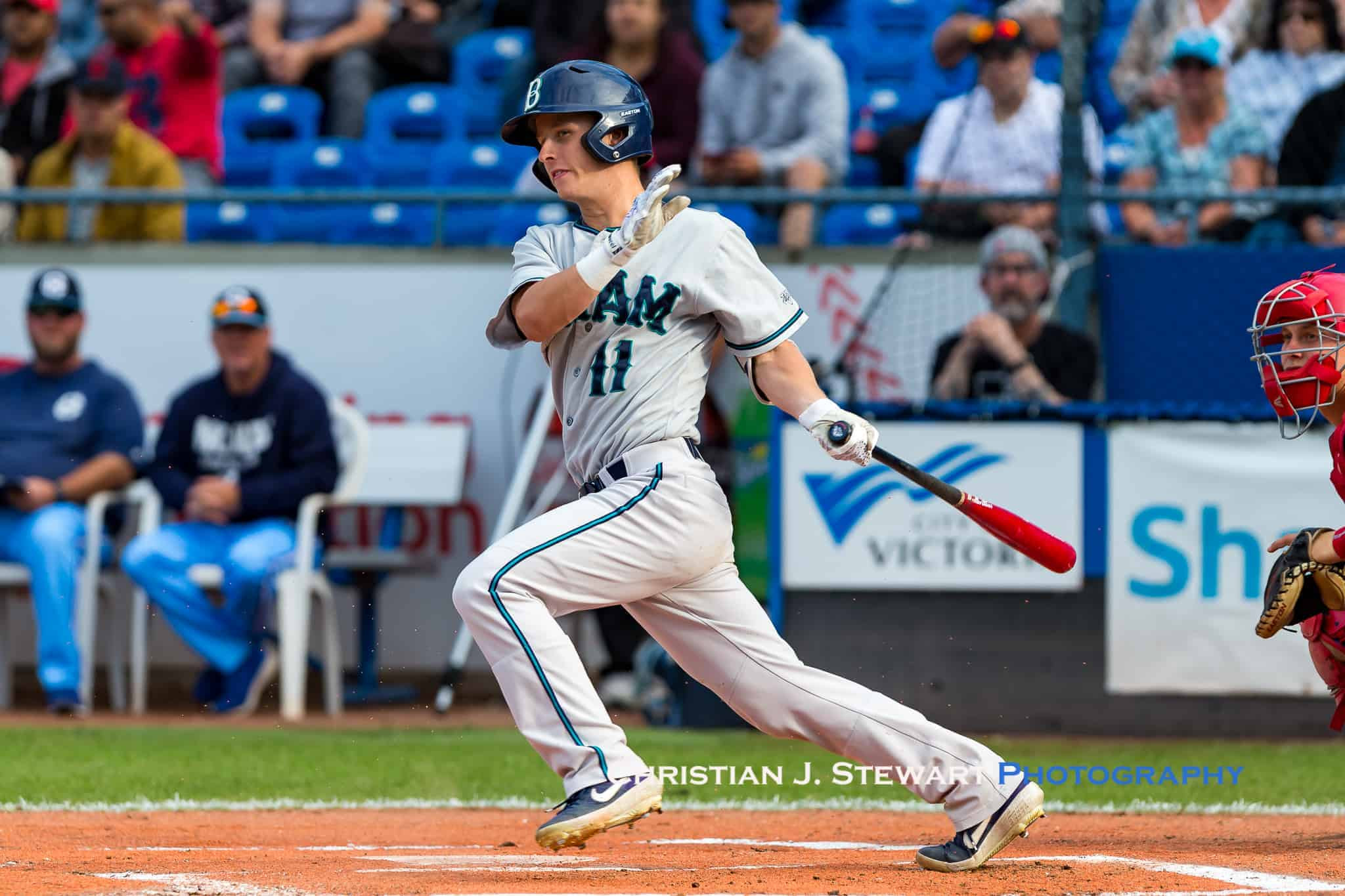 Manager Todd Haney would pull his starter one batter later after Hyde yielded a single to Jack Machtolf. The Morrison homer would prove to be the only blemish for Hyde on the night, as the righty would finish one out away from a quality start—collecting seven strikeouts and scattering just two hits over 5 2/3. 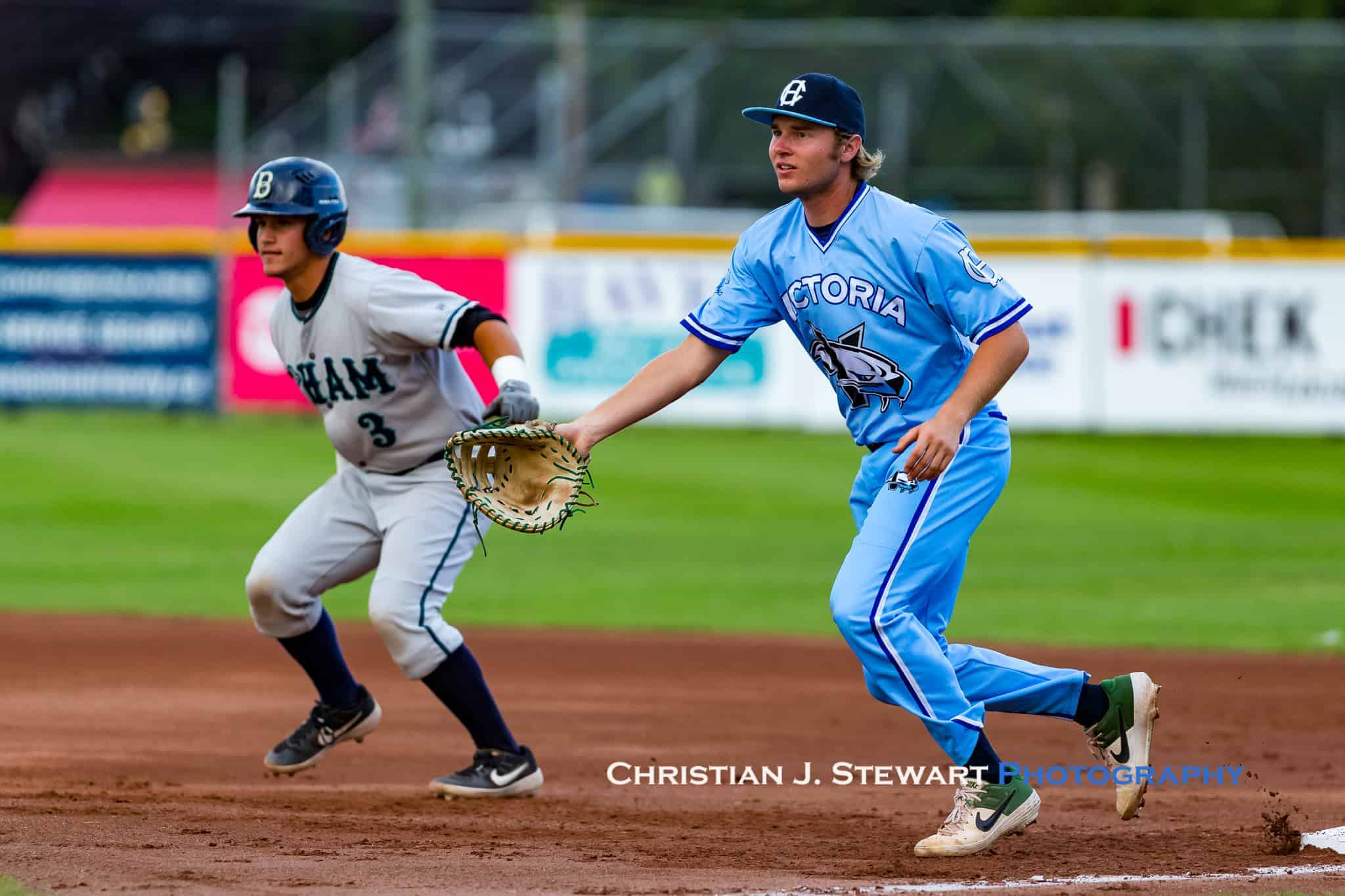 Chase Wehsener prepares to jump into action at first base. The Baylor product would argue strikes in the eighth, as Head Coach Todd Haney would be ejected for arguing for his first basemen. (Photo by Christian J. Stewart)

One inning later, Jimmy Chatfield pitching in relief retired the first two HarbourCats to start the eighth, but Chase Wehsener was able to draw a full count with the heart of the ‘Cats lineup due up.

Wehsener, however, was called out on strikes after he already began walking towards first. The first baseman then tossed his bat and helmet in frustration, as Todd Haney came out from the dugout to argue the location of the previous pitch. Following a lengthy argument that drew cheers from the crowd, home plate umpire Rhonda Pauls tossed Haney from the game—his first ejection of the season.

Bellingham poured it on with five runs in the top half of the ninth, and Danny Garcia retired the HarbourCats in the home half to close out the game. First pitch for today’s winner-take-all game is scheduled for 1:00p.m.