Four separate HarbourCats had two or more RBI at the dish, and Aaron Celestino extended his scoreless inning streak to 16, as the Victoria HarbourCats (8-3/26-12) defeated the the Yakima Valley Pippins 17-2 Friday evening in their first game on Vancouver Island in nearly 10 days.

Following a three city, seven-game road trip, the HarbourCats played their first game at Wilson’s Group Stadium since July 10, and remembered the Humboldt Broncos junior hockey team by welcoming  Karen Doerksen and her family in a pregame ceremony. Doerksen’s husband, Glen, was the driver of the Humboldt motor coach. 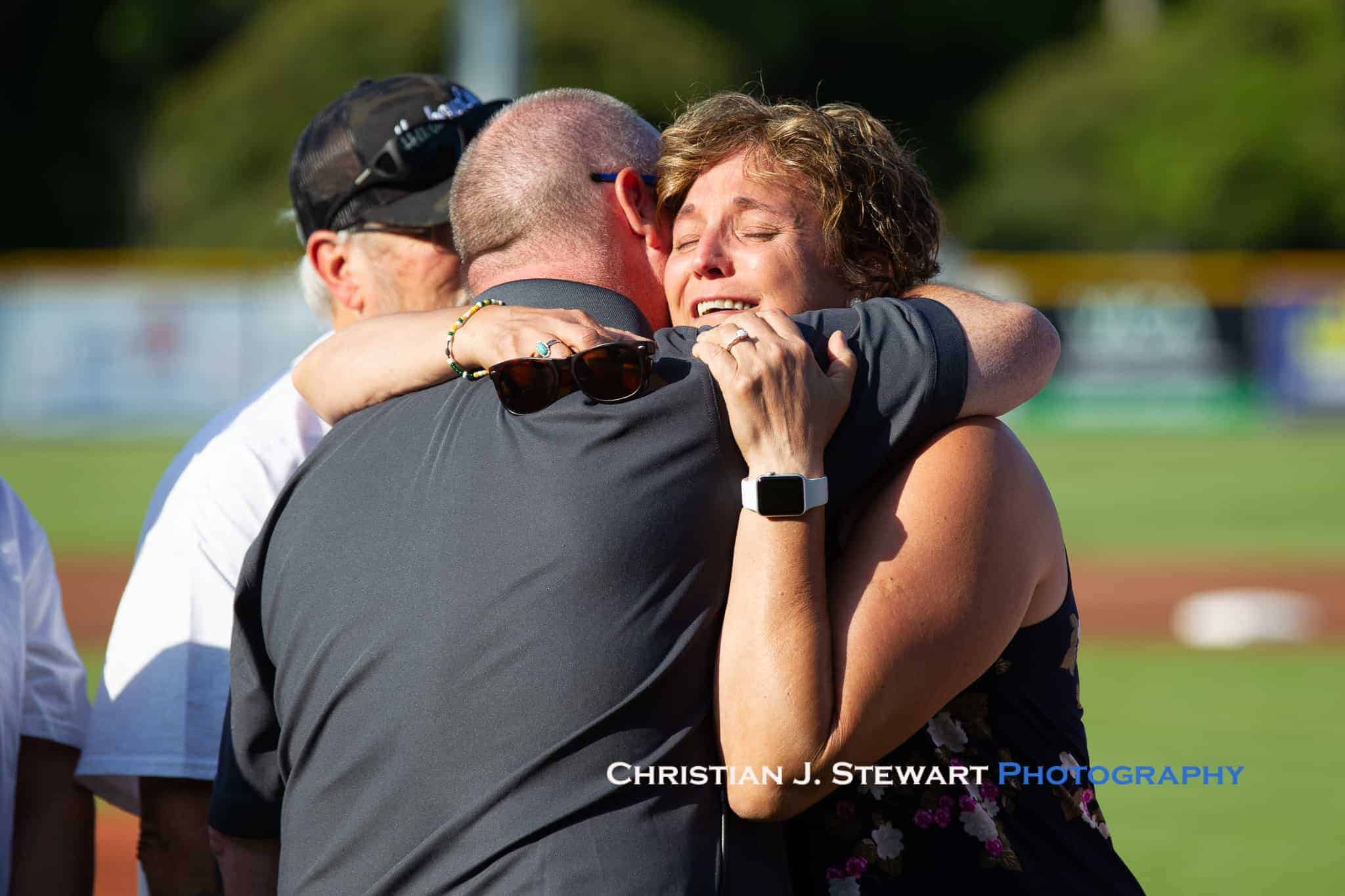 Aaron Celestino, making his first appearance on the mound since July 7, got the start tonight and showed why he has been an ace in the ‘Cats rotation in 2019.

The righty out of Incarnate Word scattered nine hits over six innings, racking up eight strikeouts in the process, and extended his scoreless inning streak to 16. The last time Celestino gave up an earned run was in a start in Wenatchee back on June 25. 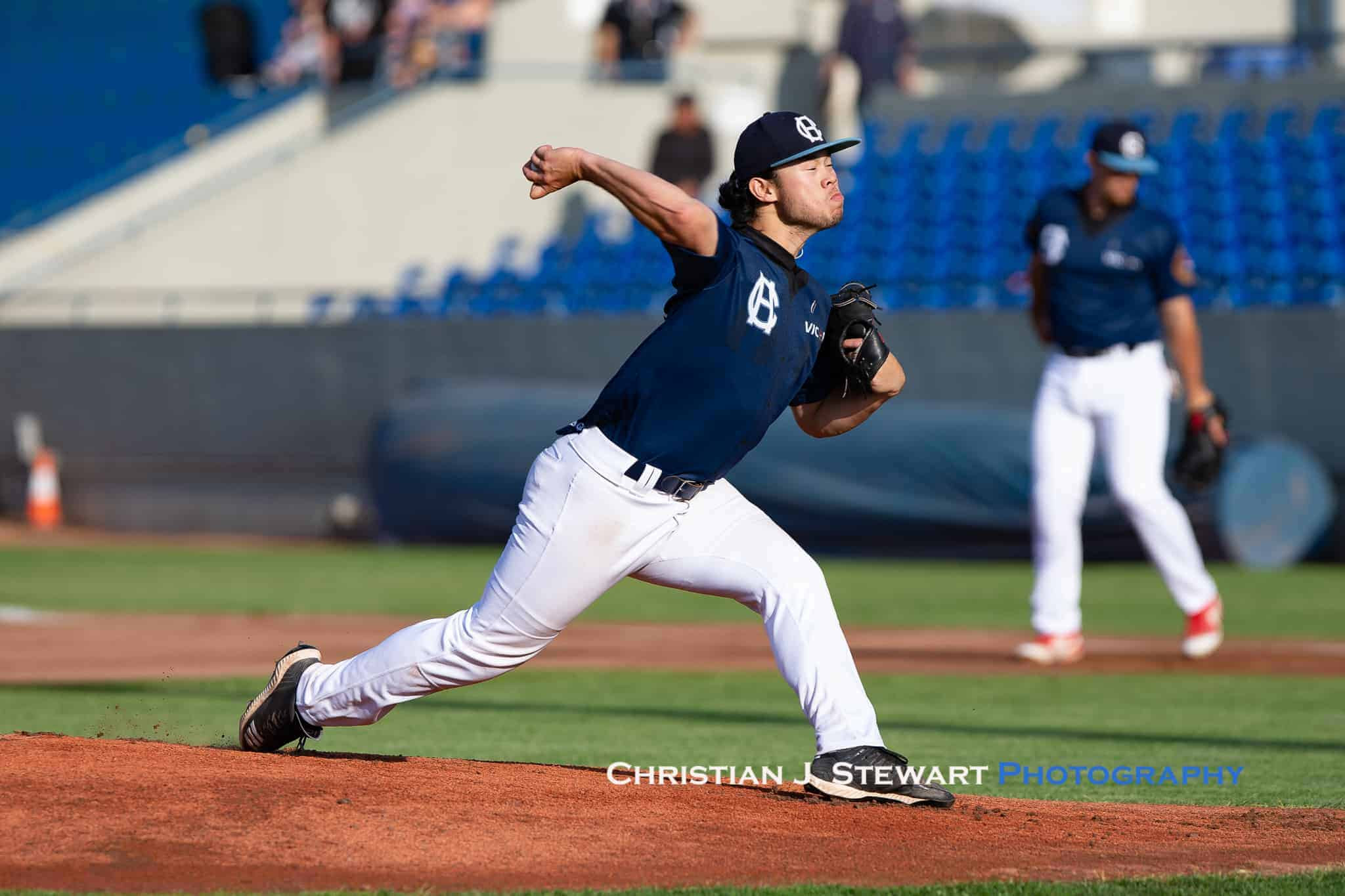 Aaron Celestino was dominant on the mound, earning a quality start and extending his scoreless inning streak to 16. (Photo by Christian J. Stewart)

Celestino also got some help from his defence to continue his streak.

After Brady Hormel got Yakima’s first hit of the night in the second, Tanner Parker lined a single into right but Plaia gunned down Hormel trying to go from first to third. The  outfield assist was Plaia’s fourth of the season, putting him one behind Bellingham’s Jack Machtolf for the WCL lead. 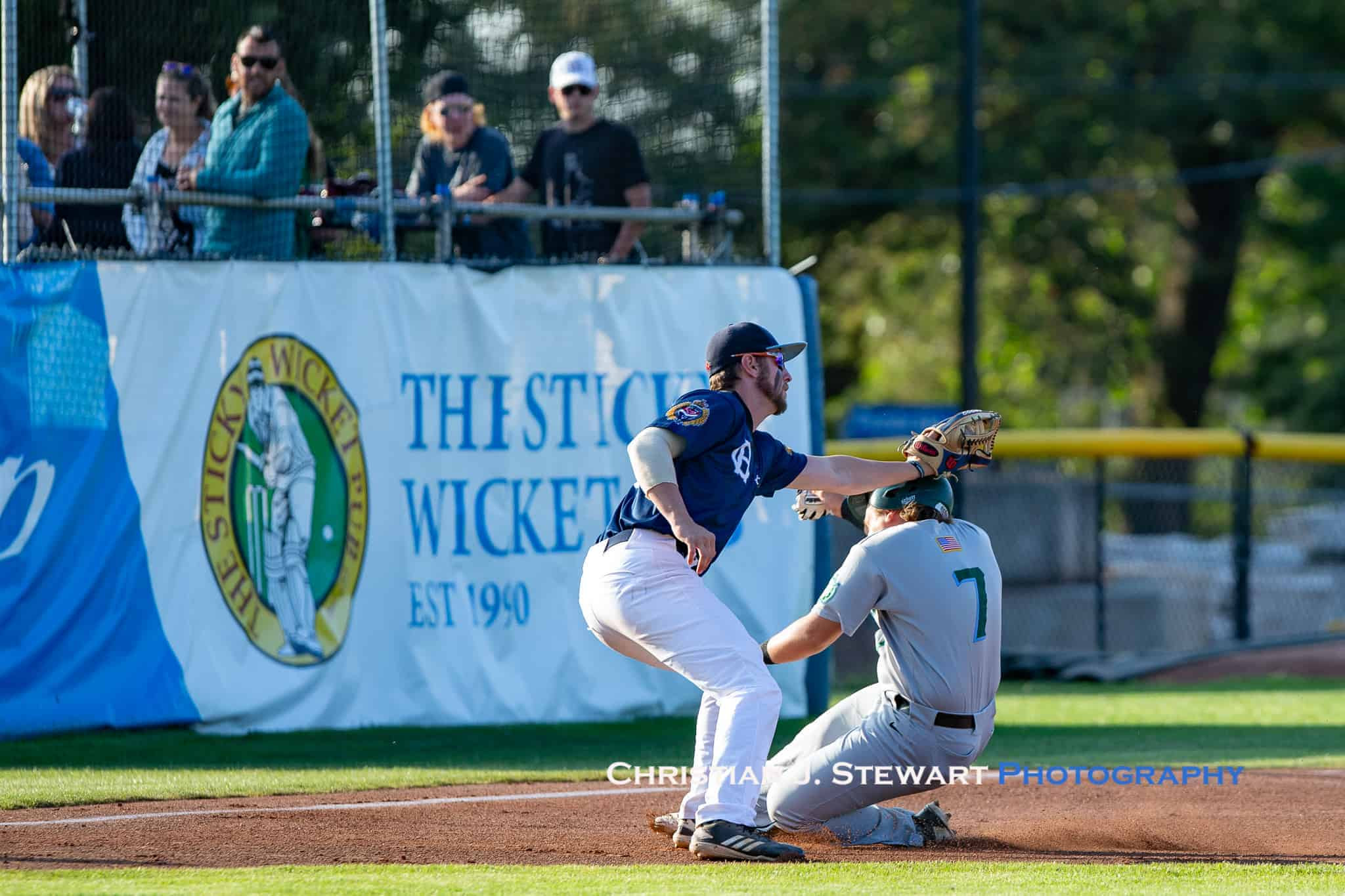 Griffin Paxton applies the tag after catching Nick Plaia’s laser throw from right field to get Brady Hormel out at third. Hormel would later leave the game to be examined for a concussion. (Photo by Christian J. Stewart)

In the home half of the second, the HarbourCats used a two-out rally to open the scoring. Emilio Nogales got the rally started with a double to the left field wall, and one batter later, the hero from the 19-inning game on Wednesday, Chase Meidroth singled home Nogales. Due up next in the order, Tanner Haney got his first RBI of the evening with another single that scored Meidroth and doubled the HarbourCats lead to two. 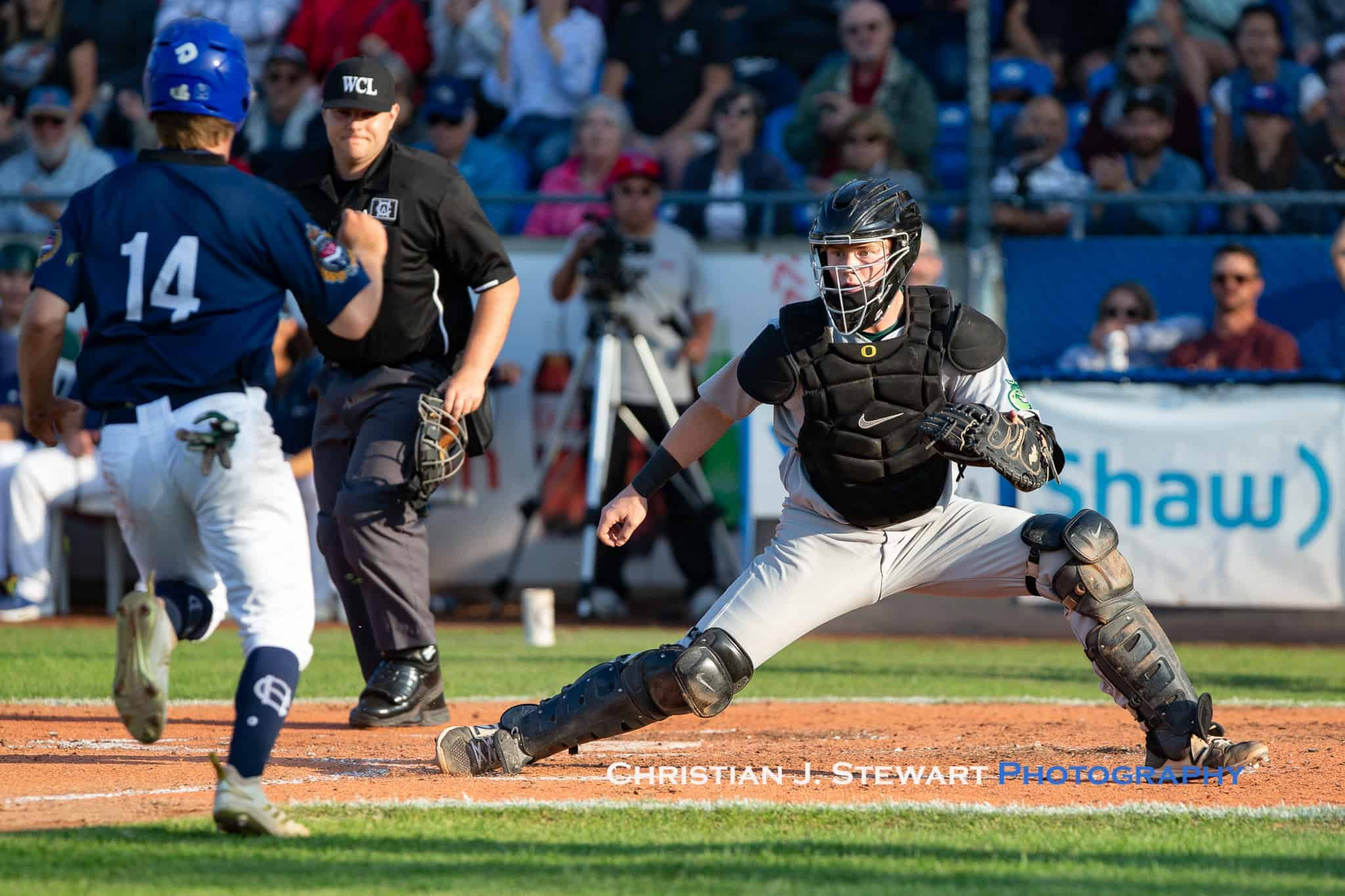 One inning later, it was a pair of recently named All-Stars that started another HarbourCat rally. 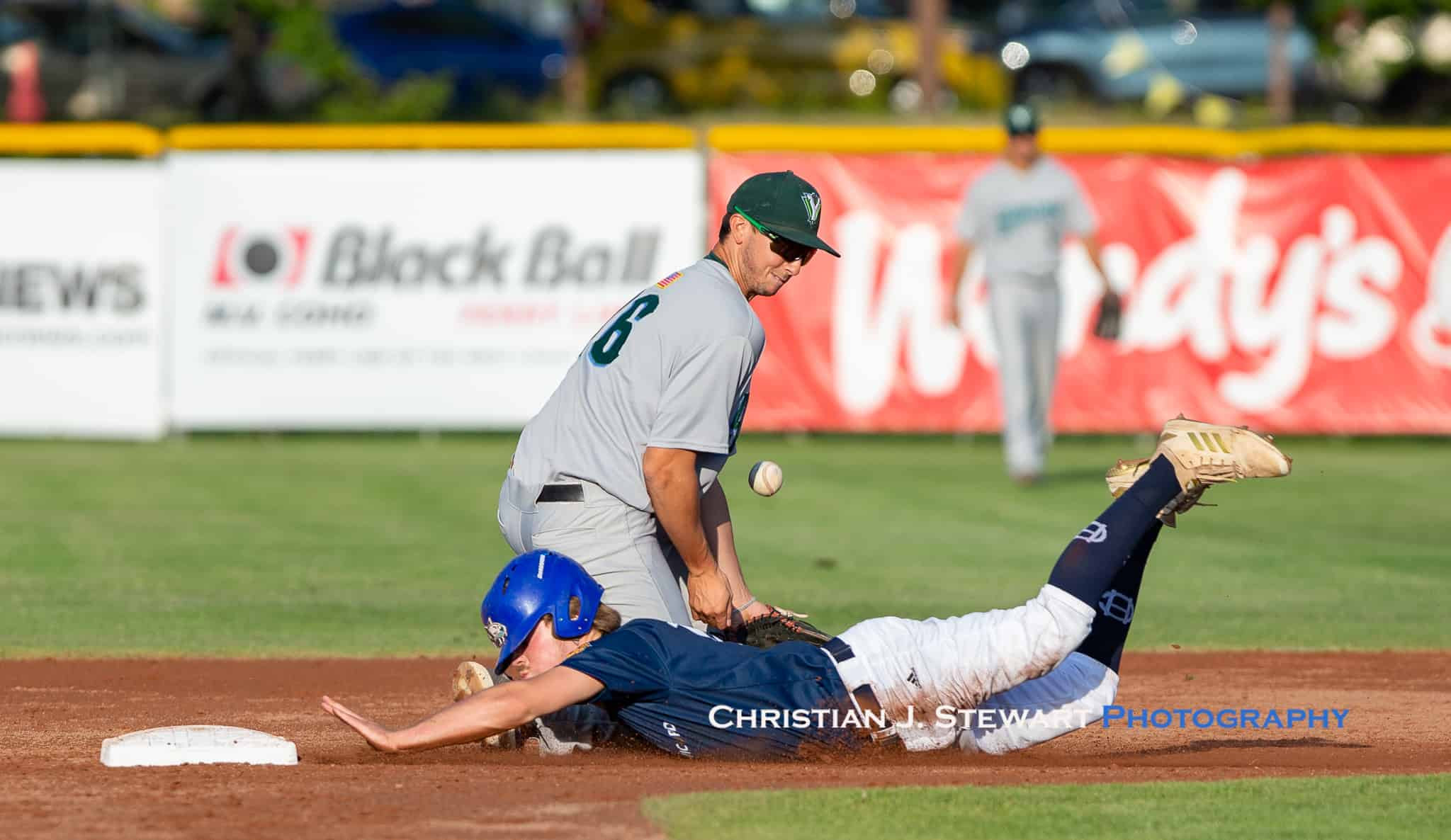 Three days after it was announced the HarbourCats will send six players to the All-Star game next week in Bend, two of those players started the next HarbourCats rally, as Jason Willow led off the third with a double, and Frankie Niemann smacked a single to put two men on for Victoria.

Kyle Harper then launched a sacrifice fly that scored Willow, and gave the Baylor Bear his 12th RBI in 11 games for Victoria this summer.

Nogales notched his second single of the game to lead off the fourth, and Tanner Haney brought home the Fresno State infielder with his second RBI base hit of the evening to make it a 4-0 lead. 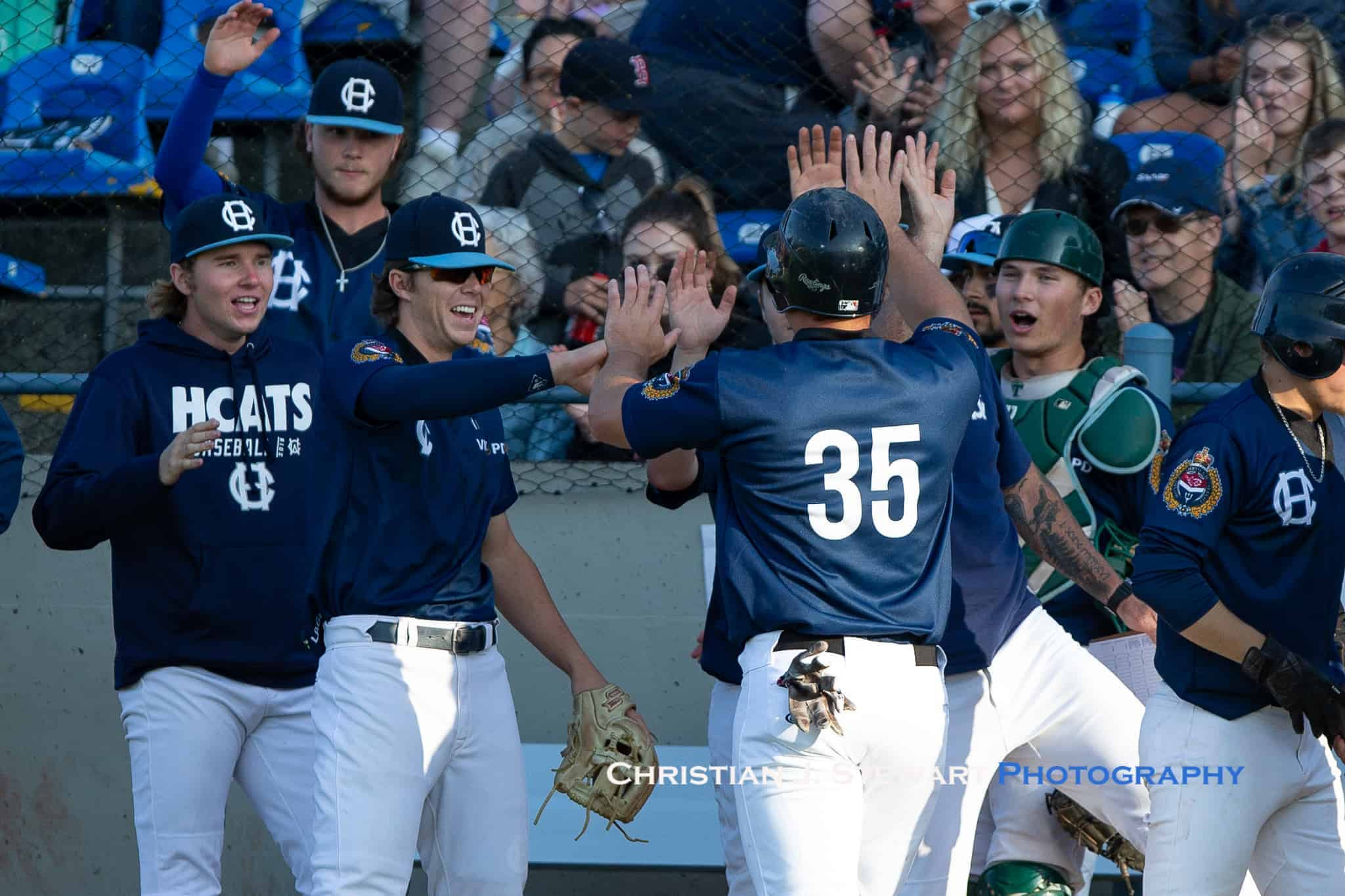 Meanwhile, on the mound, Celestino was cruising until Yakima tried to muster some offence in the fifth.

The Pippins loaded the bases with two outs, however, Celestino avoided the inning unscathed by striking out Kyle Dean for his sixth strikeout of the game.

The HarbourCats added six insurance runs in the sixth, highlighted by a long ball from Nate Pecota, and scored six more times in the seventh to put the game well out of reach.

With the victory, the HarbourCats ended Yakima’s win streak at three, and moved into sole possession of first place in the Second Half division standings. Victoria will go for the series victory over Yakima on a fireworks night tomorrow evening, first pitch is slated for 6:35p.m.