Canada’s first A final appearance at the 2019 World Rowing U23 Championships saw the Women’s Coxed Four take fourth place after a close battle with Australia for the final spot on the podium.

Canada and Australia were neck and neck through the full 2000m, with Australia pulling ahead in the last 500 to finish 4.17 seconds ahead of Canada’s time of 7:08.70.

The Women’s Quad finished their U23 Worlds experience with a strong performance in the B final, coming in first place (seventh overall). While sitting in third place for much of the first half of the race, the crew made a big push to advance ahead of the Czech Republic and be the first across the line with a time of 6:37.930.

“I think we did a good job from the 750 holding there and then slowly gaining,” said bow-seat Marilou Duvernay Tardif (St. Jean-Baptiste, QC). “Everybody was very excited about what was happening in the boat. It was pretty fun to see and to feel.”

“We’re a pretty powerful crew, we knew that the middle was kind of where we get crews, cause we’re pretty consistent and we always make up speed,” said stroke-seat Kieanna Stephens (Surrey, BC). “Throughout the regatta we knew that we had a finish. I was confident that we could pull through and when we did it just gave us more motivation to finish it off.”

Saturday morning also featured the last set of semi-finals of the event. Spencer Kielar (Guelph, ON) is moving on to the Lightweight Men’s Single B final after placing fourth in the A/B semi-final. Tyler Adams (Victoria, BC) and Michael Bryenton (Peterborough, ON) will also compete in Sunday’s B finals after finishing sixth in the Men’s Double A/B semi-final. 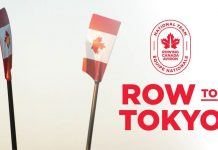