It’s probably not how the Nanaimo Timbermen chalked it up. However, after tying the Burnaby Lakers 8-8 Friday night at the Bill Copeland Sports Centre, the T-Men are advancing to the postseason for the second straight year. The Timbermen advances as a result of them owning the head to head tiebreaker against the Lakers as Nanaimo went 2-0-1 against Burnaby. For the Lakers, they miss the playoffs for the second straight season after starting the year with a 4-0 record.

For Burnaby, there were not enough scorers without the name Robert Church. Church had five goals and an assist, proving that he was still a lethal weapon until the very end. Outside of Church, Dane Stevens had two goals while Tyler Digby had the other Burnaby goal. The Lakers needed a strong performance from Eric Penney tonight, and he did his very best. He made 51 saves for his highest single-game save total this season. Penney finished the season with a 10-6-1 record, an 8.58 GAA, and a .823 save percentage.

Nanaimo got goals from six different players, including a two-goal performance Jon Phillips and Tyson Roe. Roe was fantastic all night, flattening a few Lakers with his hits and got past two defenders to put Nanaimo ahead 7-6 with just over 10 minutes to go. Charles Claxton had some of his best work in overtime and made a total of 52 saves in the game while being named the first star. Nanaimo now awaits their first-round opponent as a Shamrocks win tomorrow would mean a matchup with their island rivals. 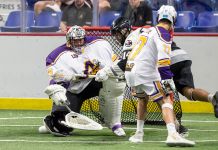