VICTORIA — The Burnaby Bulldogs used a pair of three-run rallies to defeat the Victoria HarbourCats 11-4 in a non-league exhibition game Sunday afternoon at Wilson’s Group Stadium at Royal Athletic Park.

The HarbourCats, who returned to Vancouver Island on Saturday after splitting a two-game series in Ridgefield against the Raptors, scored two runs off a pair of wild pitches in the sixth inning but couldn’t overcome an early deficit to the Pacific Metro Baseball League Bulldogs. 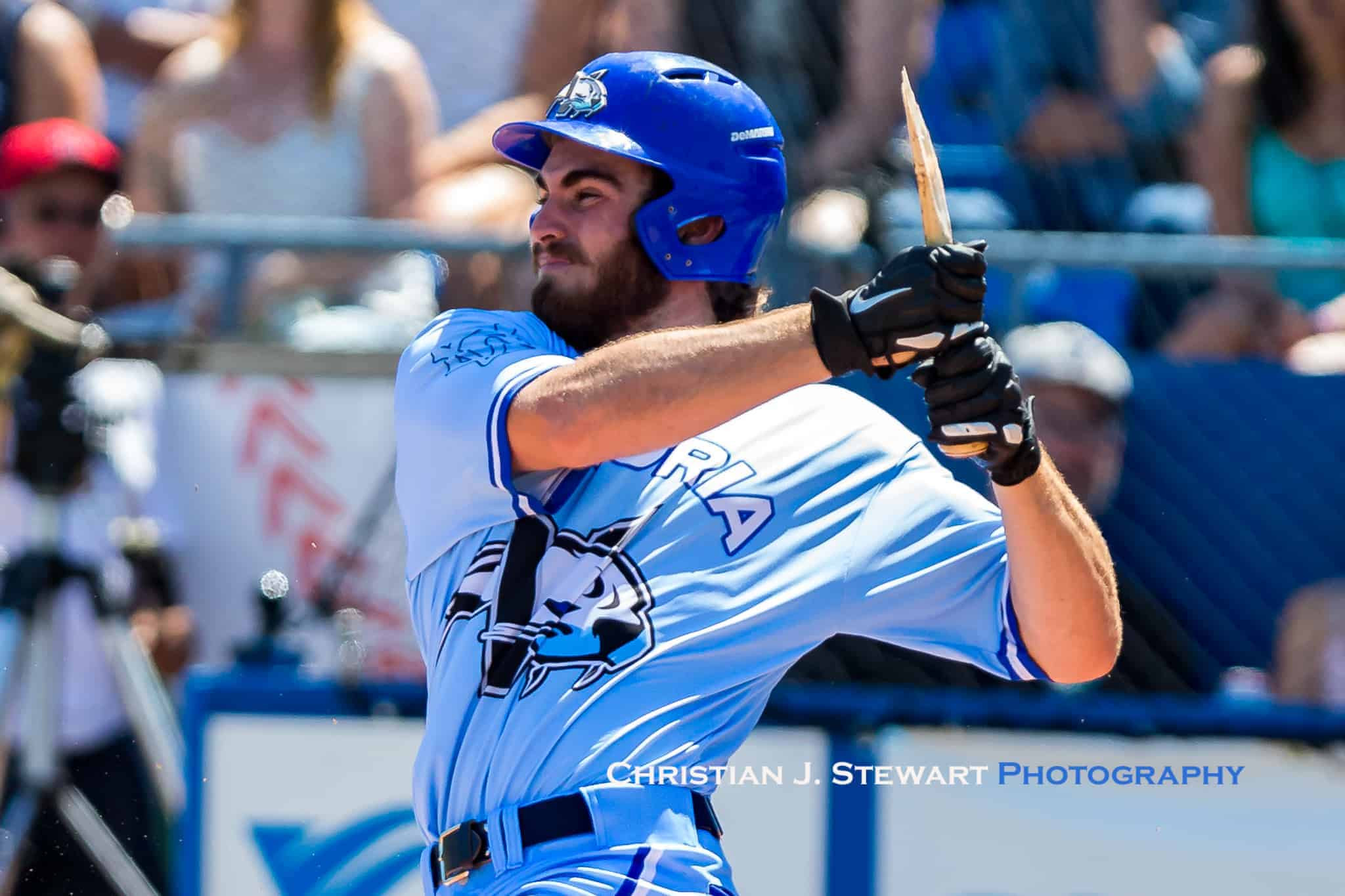 Nick Adams shatters his bat earlier in today’s game against Burnaby. Adams, however, would still reach base and score a run courtesy of a wild pitch. (Photo by Christian J. Stewart)

Burnaby — the reigning provincial champions — will represent team B.C. at the Baseball Canada National Championships later in the summer, and look to earn their third national title in three years after winning it all when the tournament was held in Victoria in 2017.

In today’s matinee, the Bulldogs sent UBC alum Alex Webb to the mound against a potent HarbourCats lineup that came into the afternoon game averaging more than seven runs per game. 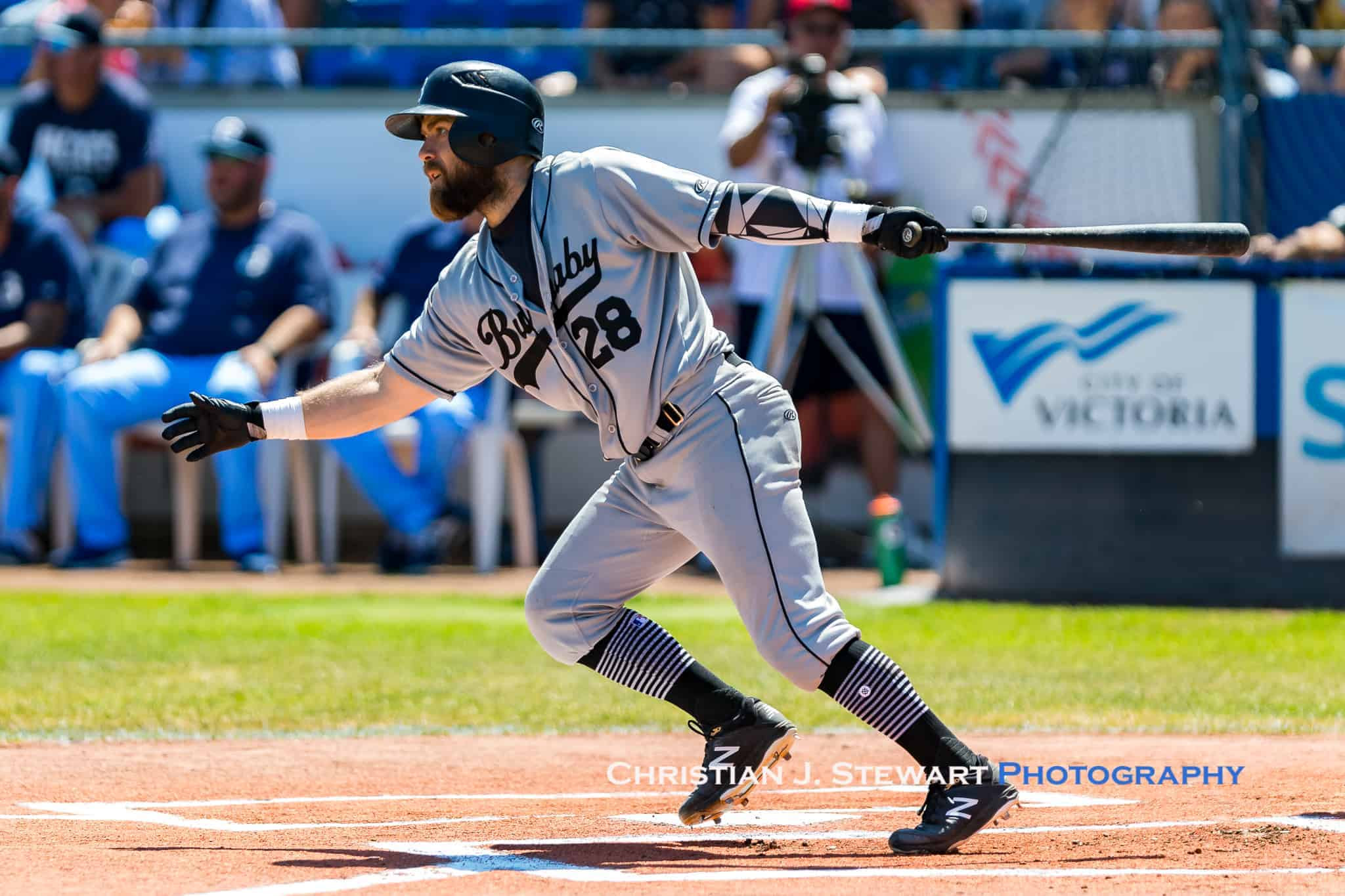 Burnaby’s Jeff Bouchard had a pair of hits in four plate appearances on the afternoon. (Photo by Christian J. Stewart)

Webb, a ninth round draft pick by the Cincinnati Reds in 2016, played two years of A-ball in the Reds organization in 2017 and 2018 before becoming a minor league free agent this winter.

The righty from UBC showed why he was a draft pick by the Reds in tonight’s game, retiring the first eight HarbourCats to start the game before Griffin Paxton got Victoria in the hit column with a single in the third. 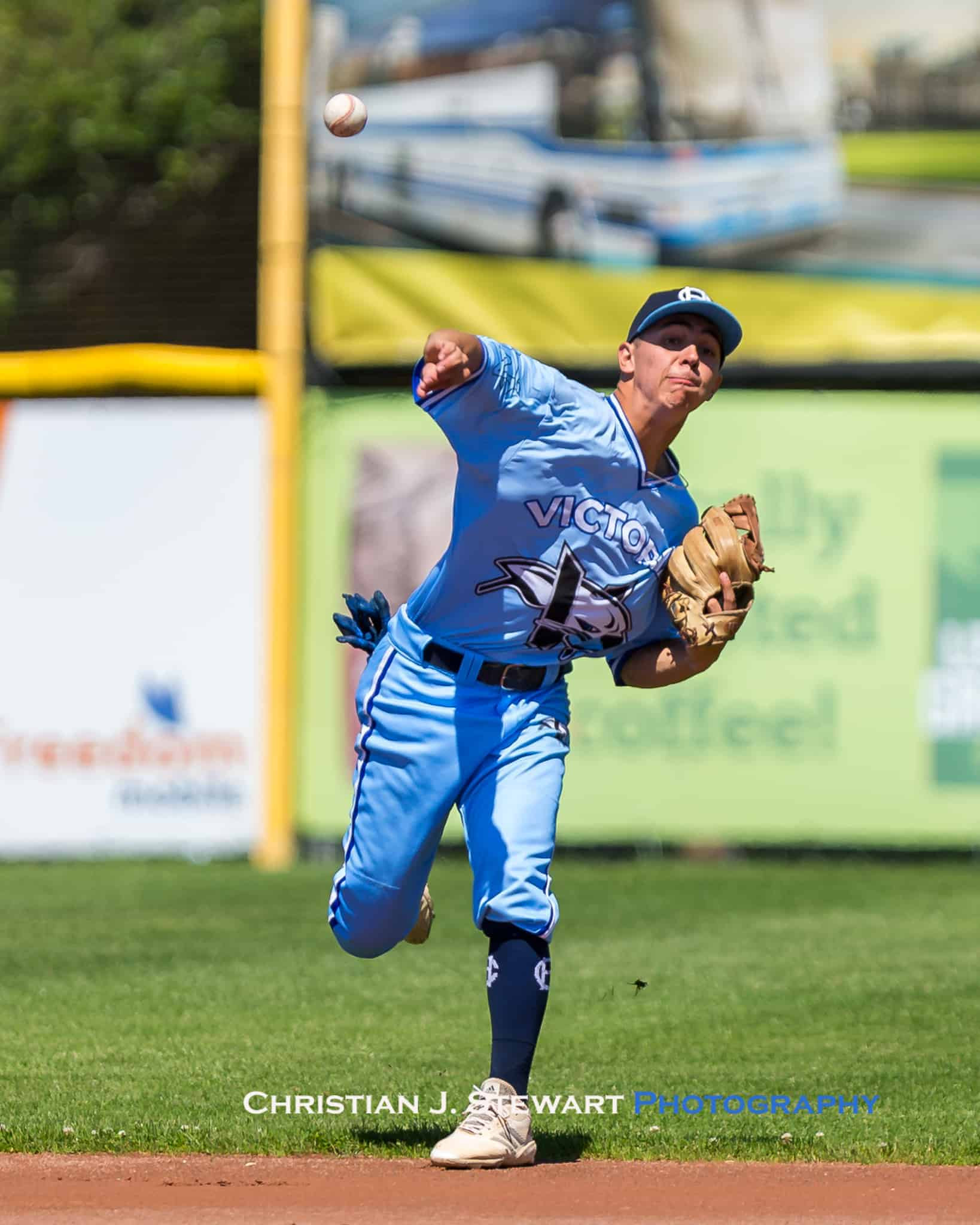 Gus Wilson flexes his face while throwing a ball from shortstop. Wilson notched his first hit as a HarbourCat in the third inning. (Photo by Christian J. Stewart)

Newcomer Gus Wilson continued Victoria’s rally in the third with his first HarbourCats hit that advanced Paxton to third, but Webb got Ty Schindel out looking with a strikeout to get out of the inning unscathed.

Meanwhile, on the Victoria mound, Garrett Goodall made his first start of the season and matched his counterpart by also putting up zeroes through the first three innings of the game.

In the fourth, however, both Goodall and Webb would exit and leave the rest of the game up to the bullpen. 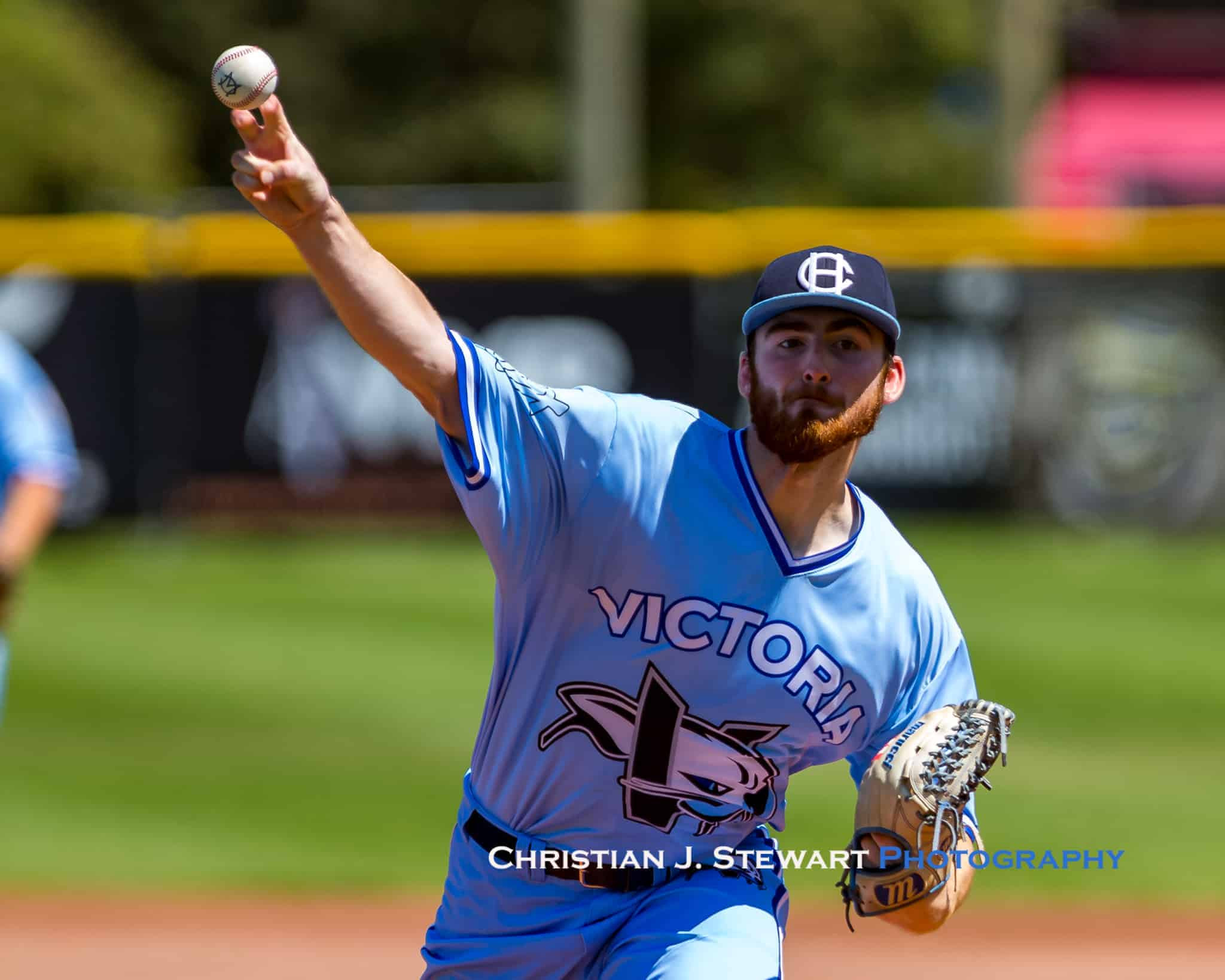 The Bulldogs started by getting some offence going in the fourth with Goodall out of the game, sending eight batters to the plate, highlighted by a Nolan Weger two-run single, and scoring three times in the frame.

One inning later, with a new Burnaby pitcher on the hill, Victoria responded. Harrison Spohn walked with one out in the fifth, while Nick Adams lanced a double to give the HarbourCats two men in scoring position for the first time in the game. 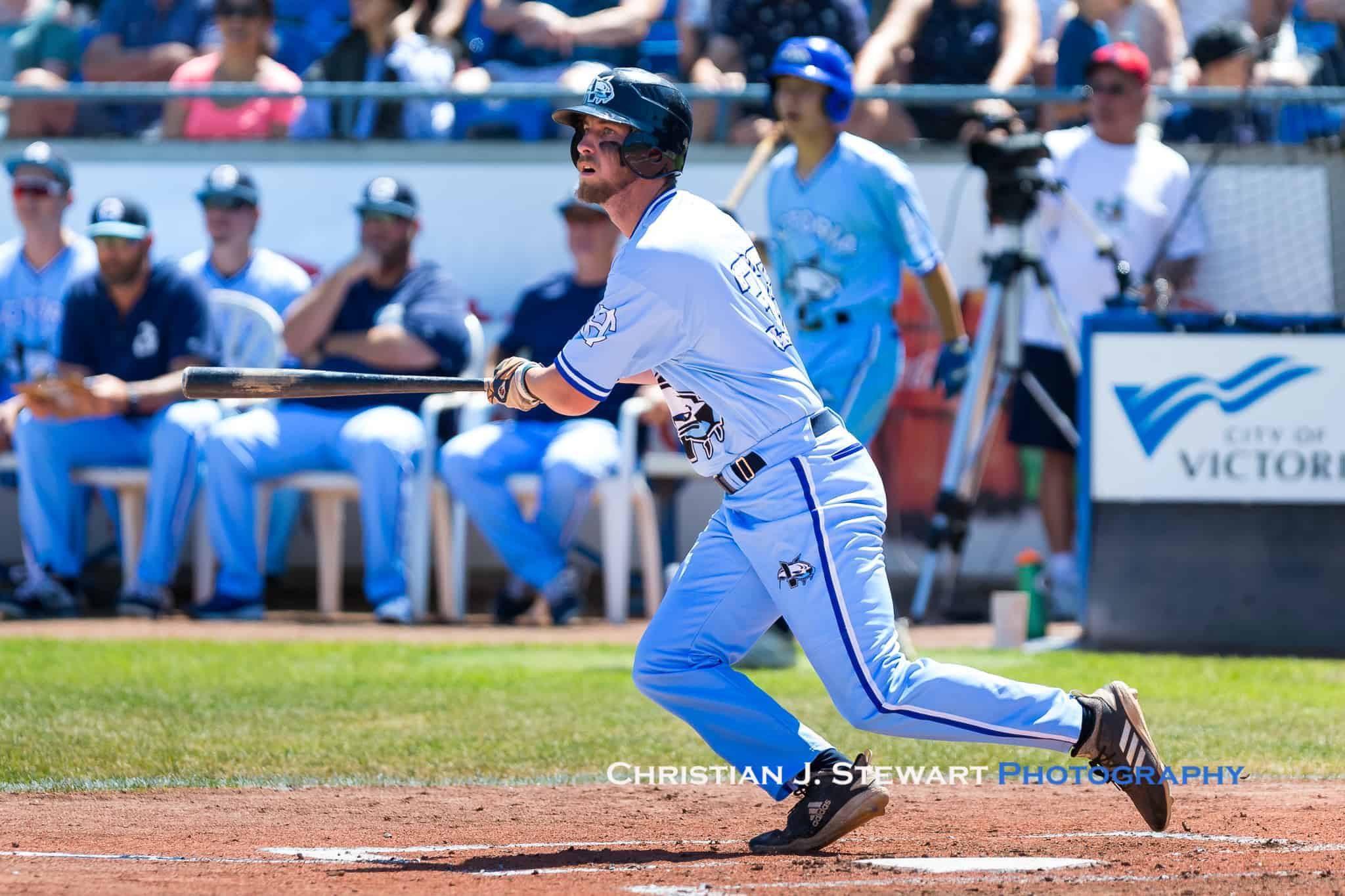 Griffin Paxton had Victoria’s first hit of the game in the third, ending Alex Webb’s hot streak to start the game. (Photo by Christian J. Stewart)

After Burnaby pitcher Braeden Alleman got Liam Balance to pop out for the second out of the inning, the righty from UBC unleashed two consecutive wild pitches to bring Victoria within a run and make it a 3-2 game. Alleman would avoid any more damage with a strikeout to end the inning.

In the sixth, Burnaby busted the game wide open with a Matt Reyes three-run homer that bounced off the scoreboard in left field and made it a 6-2 lead.

Burnaby added four more runs in the later innings, and Victoria scored twice in the ninth to make the score a little friendlier, but the Bulldogs would still end up outhitting Victoria 15-7 in the game to earn the convincing win.