August 2, 2019, Vancouver, BC – The North Shore Twin’s Adam Maier pitched a three-hit shut-out to lead the North Shore Twins to a 5-0 win over the Langley Blaze in second game action at the 2019 BC Premier Baseball League Championships at UBC Stadium in Vancouver.

Maier then took it from there, surrendering just one hit in the fourth and another two in the sixth as he cruised to the win, striking out nine in the process.

The Twins now advance to the 3:00 PM game Saturday, where they will meet the winner of the Mid-Island Pirates and UBC game that happens Friday at 6:00 PM.  The Blaze will now face the Coquitlam Reds in an elimination game at 12 Noon Saturday. 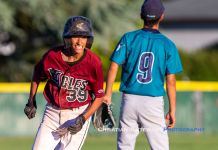 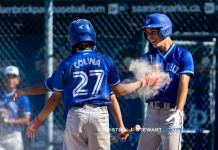