VICTORIA — The Victoria HarbourCats will live to see another day in the 2019 WCL playoffs, avoiding elimination with a 7-2 victory Wednesday evening over the Wenatchee AppleSox in game two of the North Division Championship Series at RAP. 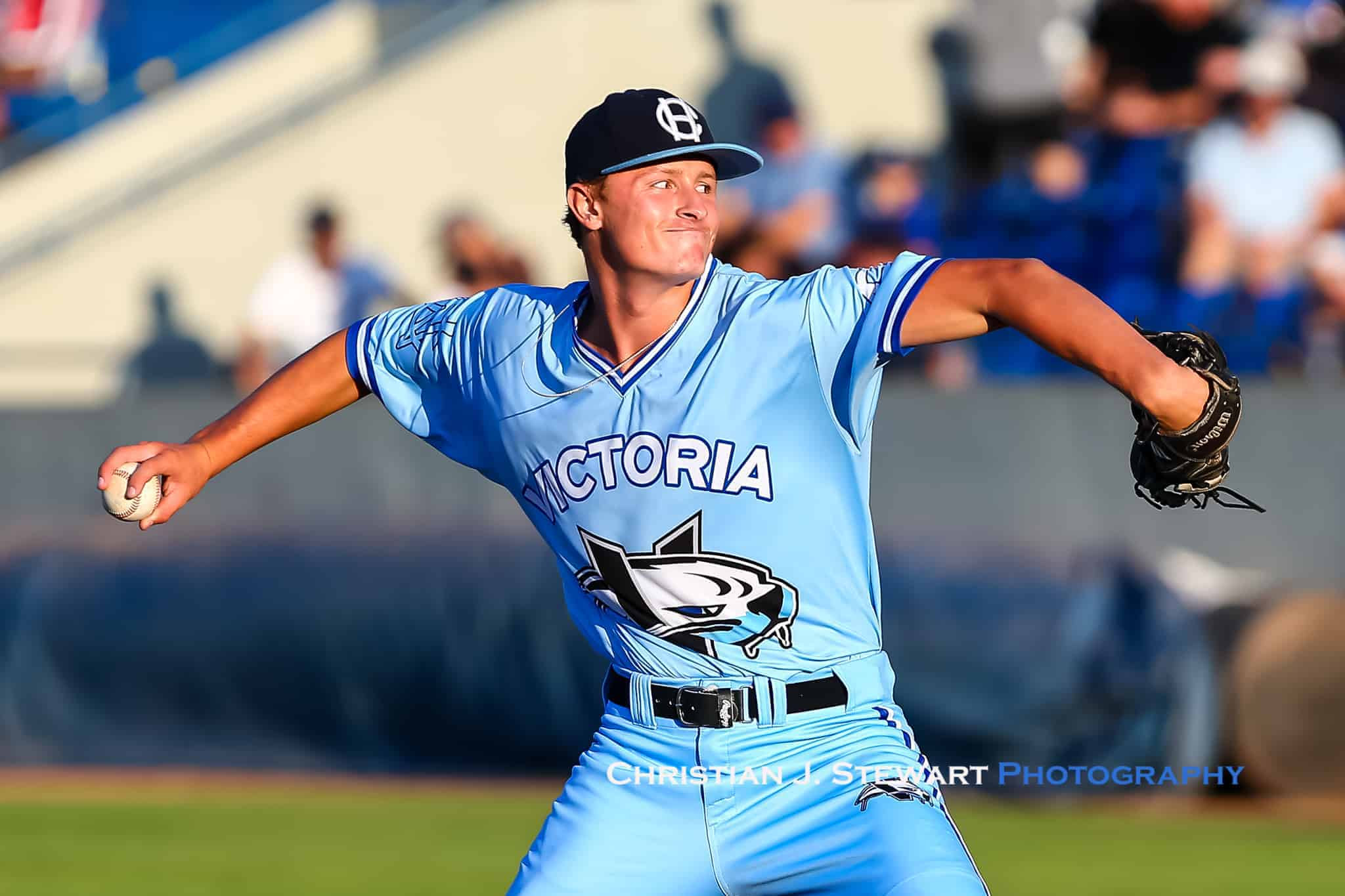 Josh Laukkanen came out of the bullpen in the third, and held Wenatchee to just one hit over 3 1/3 innings. The Boise State product also racked up five strikeouts in the relief appearance. (Photo by Christian J. Stewart)

Despite not recording a hit until the sixth, Wenatchee managed to hold the lead on two separate occasions in the first three innings tonight.

Reagan MacDonald got the start for the HarbourCats on the mound, and didn’t allow a hit through two innings. However, the southpaw from Dallas Baptist had trouble with his command in his first career WCL playoff start. The Wenatchee AppleSox didn’t record a hit until the sixth inning, but still managed to score twice in the three innings. (Photo by Christian J. Stewart)

One night after allowing six walks in a game one loss in Wenatchee, MacDonald yielded five walks in the first three innings today to give the AppleSox early signs of life.

Jashaun Simon led off the game with a walk for the second straight night, and stole second one pitch later to advance into scoring position. Simon would then reach third on a ball in the dirt, and after another walk Torin Montgomery hit a line drive to Gus Wilson who had trouble with the ball which allowed Simon to score from third to draw first blood for Wenatchee. 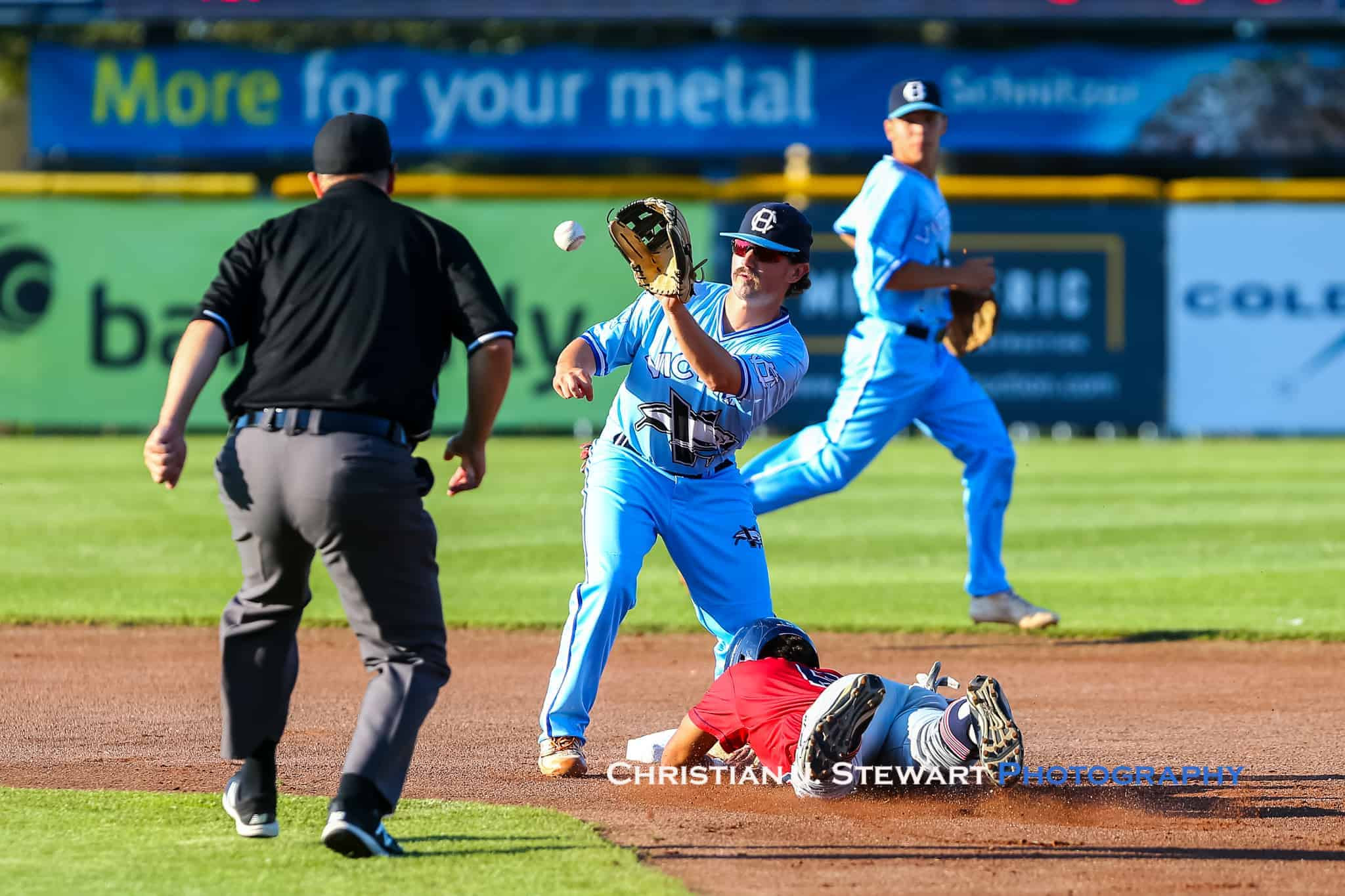 Tanner Haney, sporting a fresh moustache, attempts to grab a pickoff throw at second base earlier in the game. (Photo by Christian J. Stewart)

MacDonald limited the damage in the first when MacGregor Sharpe caught Tanner Smith trying to steal third, and induced a groundout to end the frame.

Victoria’s record breaking offence, that set a new WCL single season home run record with 54, would respond in the home half of the inning. With one out on the board, Gus Wilson launched the first pitch he saw over the left field fence that knotted the game at one. 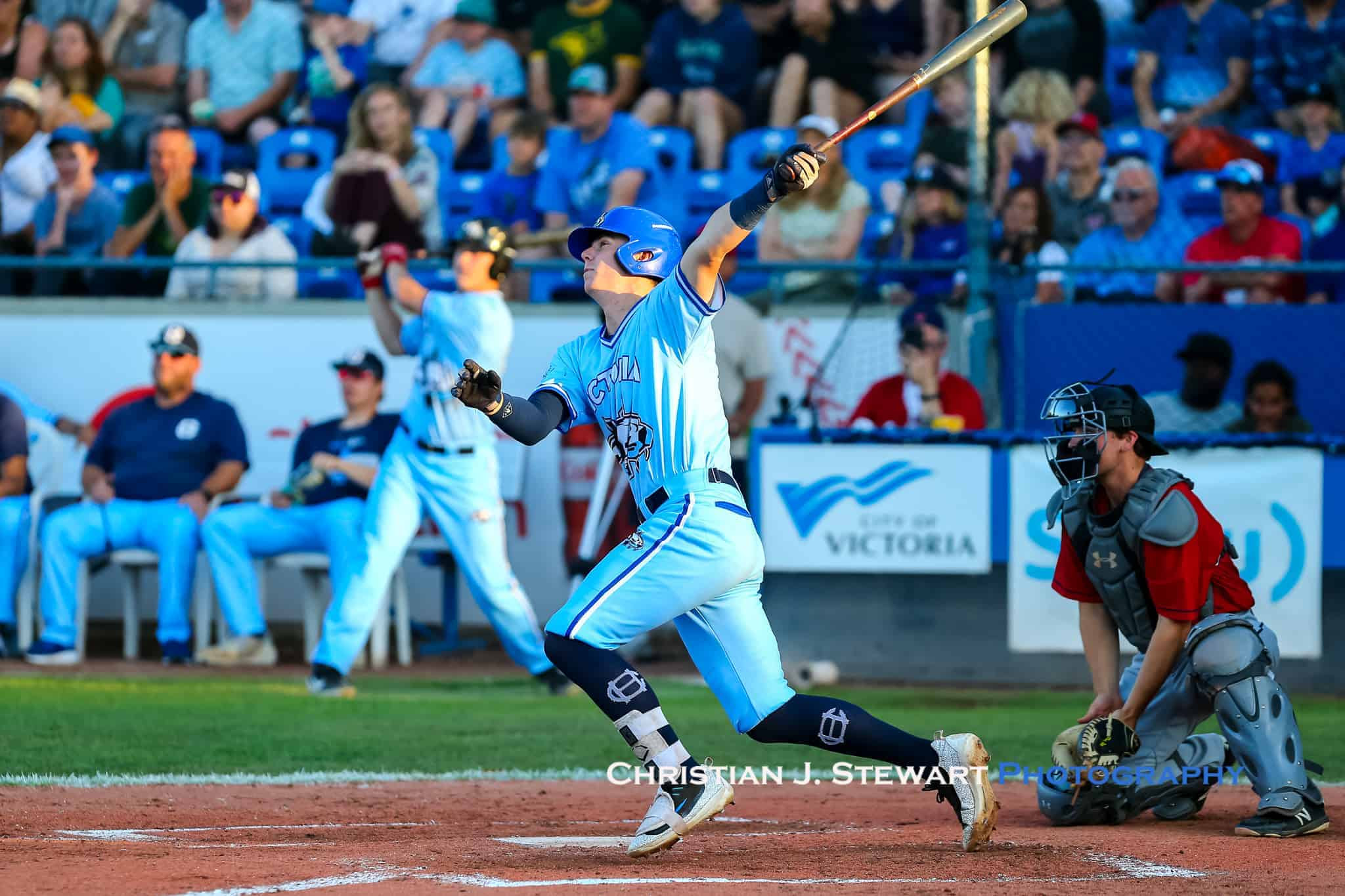 Harrison Spohn follows the trajectory of his home run in the third inning. The home run was the Cal Baptist product’s third in four games. (Photo by Christian J. Stewart)

MacDonald rebounded after the rocky first by retiring the side in order in the second, but had trouble with his command again in the third.

Wenatchee drew back to back walks to begin the third, and one out later Tanner Smith drew the third walk of the inning to load the bases. Despite not allowing a hit over the two innings, Manager Todd Haney pulled the southpaw after the fifth walk of the game, and opted for Josh Laukkanen out of the bullpen.

Laukkanen got Montgomery to hit a tailor-made double play to Wilson at second, but the infielder from Boise State hustled down the line to beat out the throw and allow the AppleSox to retake a one run lead. 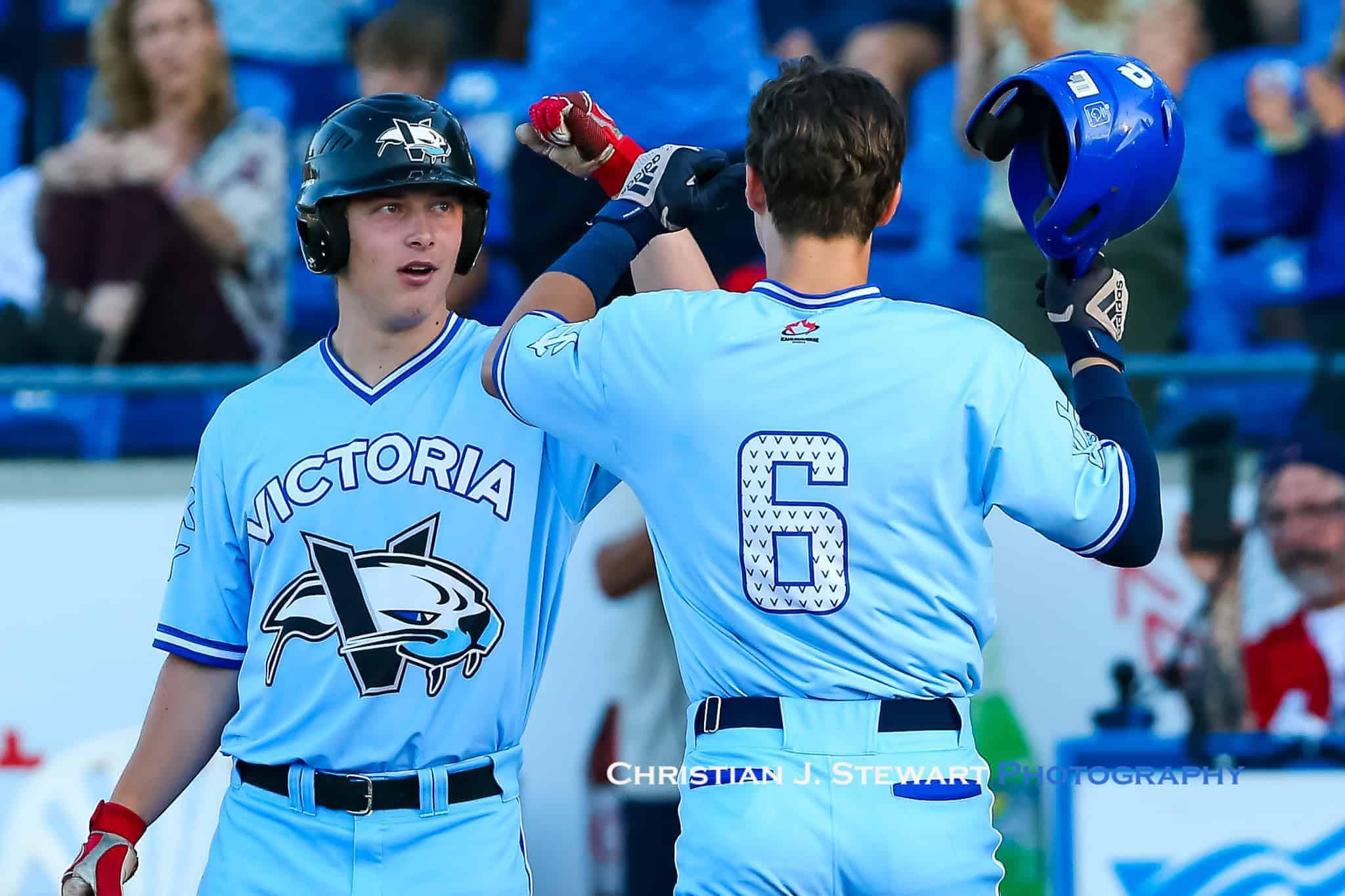 Harrison Spohn fist bumps with Kyle Sherick after hitting a go-ahead homer. Spohn had two RBI and a pair of runs in tonight’s game. (Photo by Christian J. Stewart)

In the home half of the third 2019 Player of the Year Griffin Paxton drew a walk to ignite a two out rally, as Harrison Spohn then came up in the order and smacked a two-run homer to give Victoria their first lead of the series. The home run was Spohn’s third in four games.

In the top half of the fifth, Laukkanen would retire three consecutive AppleSox batters after Wenatchee put two in scoring position with no outs to maintain the one run lead, and his offence rewarded the reliever by finally busting out in the home half.

The HarbourCats exploded for three runs in the fifth, bringing seven men to the plate, highlighted by a RBI single from Victoria native Ty Schindel to make it a 6-2 game. 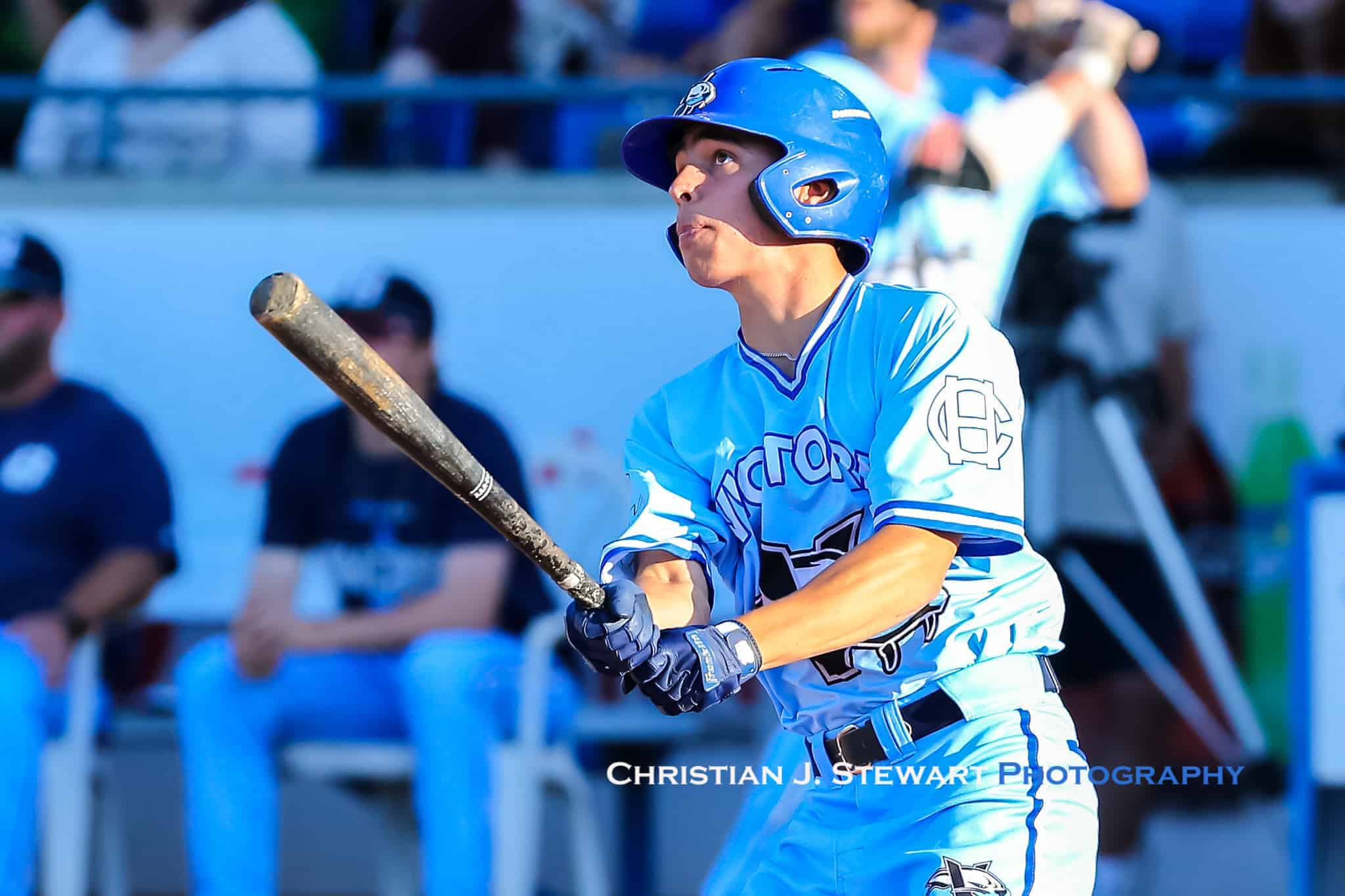 Aside from the first inning home run, Gus Wilson scored twice and had a walk in tonight’s playoff game. (Photo by Christian J. Stewart)

Paxton notched his team-leading 32nd RBI with a sacrifice fly one inning later, as the HarbourCat bullpen once again shut down the AppleSox in the latter stages of the game.

After Tyler Hilton and Mikey Callia combined to hold Wenatchee off the board in four plus innings of work last night, Hunter Omlid and Jacob Potter allowed just one hit over the final three frames today to seal the win for the ‘Cats.

The HarbourCats will look to reach their second WCL Finals in three seasons with a victory in game three of the North Division Championship series tomorrow night against the AppleSox, first pitch is scheduled for 6:35p.m. at RAP.