VICTORIA —The record breaking 2019 season will continue, as for the second time in three seasons the West Coast League Finals will come to Vancouver Island. The Victoria HarbourCats will do battle with the Corvallis Knights in the Finals, after walking off the Wenatchee AppleS0x 8-7 in a winner-take-all game three to clinch the North Division Championship Series.

In a year where the HarbourCats combined to shatter nine WCL all-time records, set three new franchise marks, and clinch the First and Second Half pennant for the first time in one season, Victoria will have the chance to set another franchise first before the summer ends—winning the league championship.

Down to their final two outs in the ninth, with Victoria leading by two runs, Tanner Smith and Torin Montgomery hit a pair of game-winning RBI base hits with the bases loaded to give Wenatchee a two run lead with one inning left.

However, the HarbourCats responded in bottom of the ninth—as Harrison Spohn hit a walk off single to send the ‘Cats to the WCL Finals. 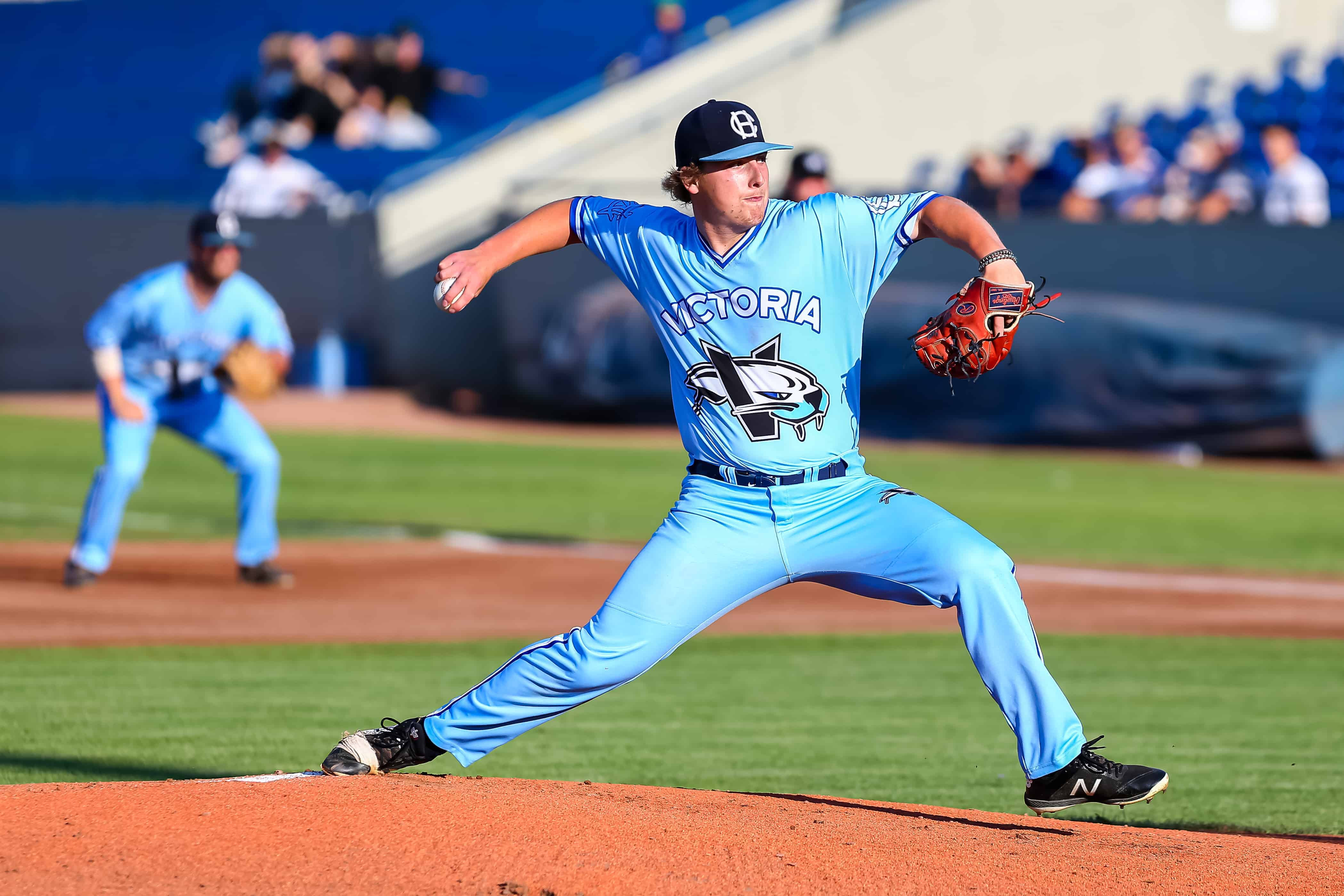 The AppleSox turned to Gavin Gorrell on the mound in the deciding game three, as the lefty from Boise State made his second start on Vancouver Island this season. Gorrell gave up four runs and four hits in just 2/3 of an inning pitched in his last start against the HarbourCats on June 25. Victoria went on to win that contest 15-4.

Nearly two full months later, however, the southpaw was on his game—racking up a season high nine strikeouts, and scattering six hits and allowing two runs over six innings. 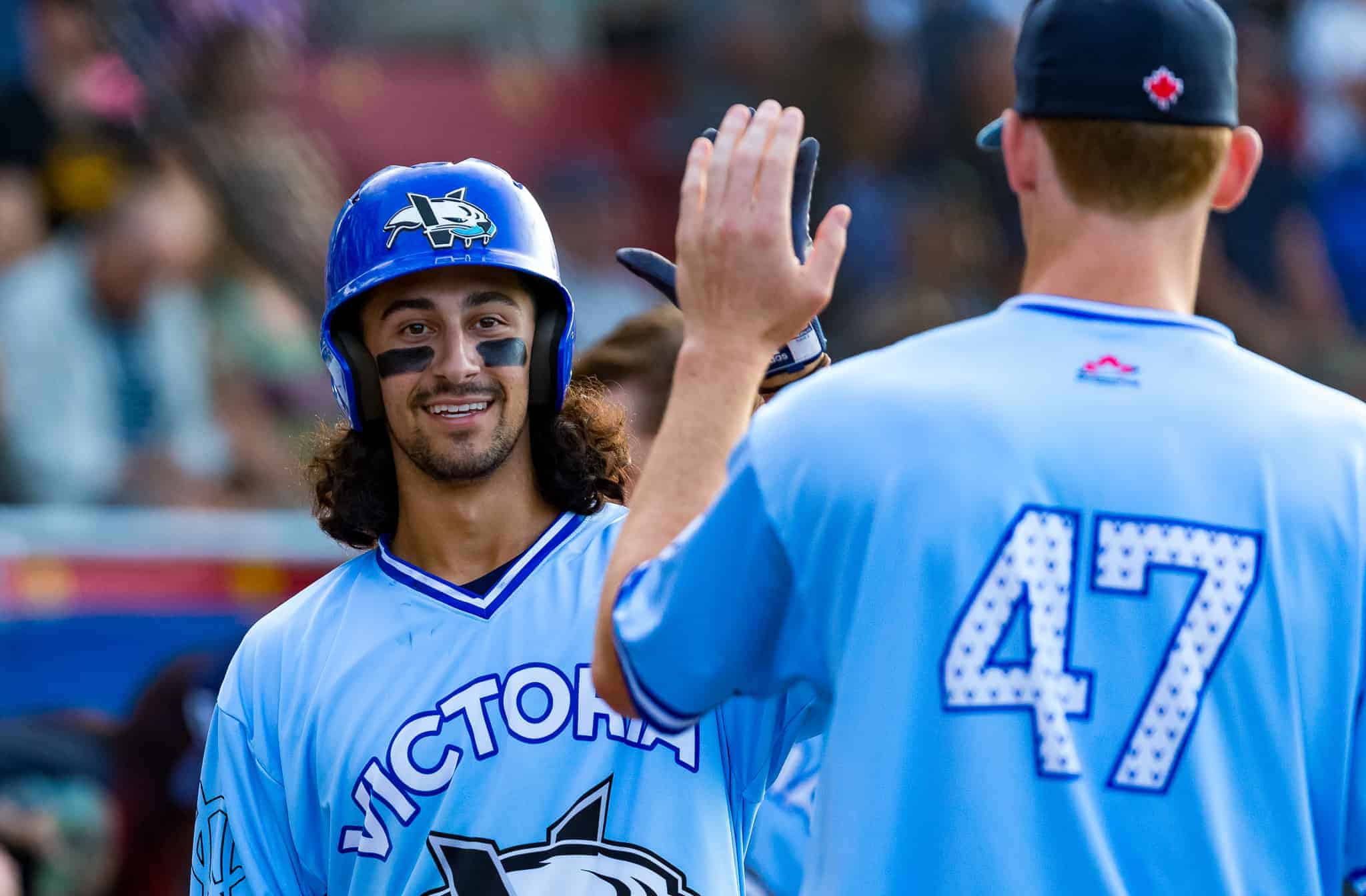 Nick Plaia did it all at the plate tonight, scoring a run, adding a hit, and walking once. (Photo by Christian J. Stewart)

The ‘Cats were able to pounce on the North Bend, WA native in the home half of the first though, as Victoria started the game with three consecutive singles.

After Nick Plaia and Gus Wilson reached on singles, 2019 HarbourCats Player of the Year Griffin Paxton smacked the first of his two RBI’s on the night to score Plaia and give Victoria a one run lead.

Tonight was the first time Gorrell has given up a first inning run since his previous start in June against the HarbourCats. Griffin Paxton tried to steal second in the first, but was caught out. The UTSA product, however, had three RBI to help power Victoria at the dish. (Photo by Christian J. Stewart)

Manager Todd Haney countered with Lower Columbia’s Mitch Lines on the mound, and the right hander was cruising early on.

Lines allowed just two hits through the first three innings, and struck out the side in the third, before running into some trouble in the fourth.

Wenatchee would put two men on to begin the frame, and Cody Simmons gave the AppleSox their first lead of the game with a two-run double to right field. Lines would be unfazed, however, striking out the next three AppleSox in order to keep the HarbourCats within a run. Lines would exit after limiting the damage in the fourth, finishing with seven strikeouts and no walks. 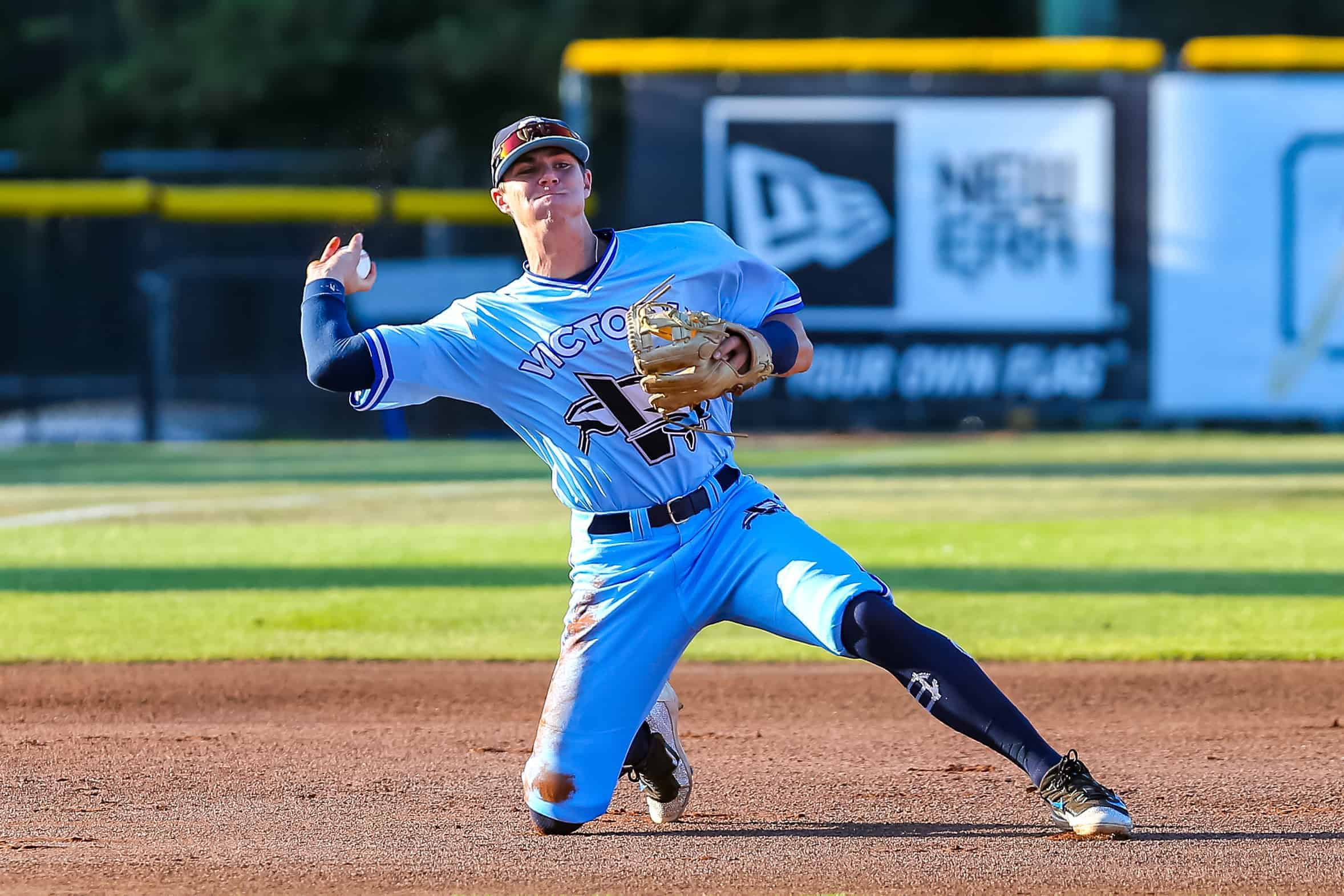 Harrison Spohn wasn’t only silky smooth at third base, as he also collected a pair of big hits tonight. (Photo by Christian J. Stewart)

One inning later, it was Nick Adams who came through in the clutch and ignite a pair of HarbourCat rallies.

Adams led off the fifth with a single, and advanced into scoring position one batter later when MacGregor Sharpe successfully put down a sac-bunt. After Gus Wilson grounded into a fielder’s choice to put two outs on the board, Griffin Paxton notched his second RBI single of the that levelled the game at two.

One inning later, with two men on base, Adams launched a three-run homer to chase Gorrell and make its 5-2 game.

Wenatchee got a run back in the seventh off Hunter Omlid—the first run the HarbourCats bullpen allowed in the playoffs—and down to their final two outs in the ninth the AppleSox loaded the bases to make the 2,019 HarbourCat fans in attendance eerily quiet. 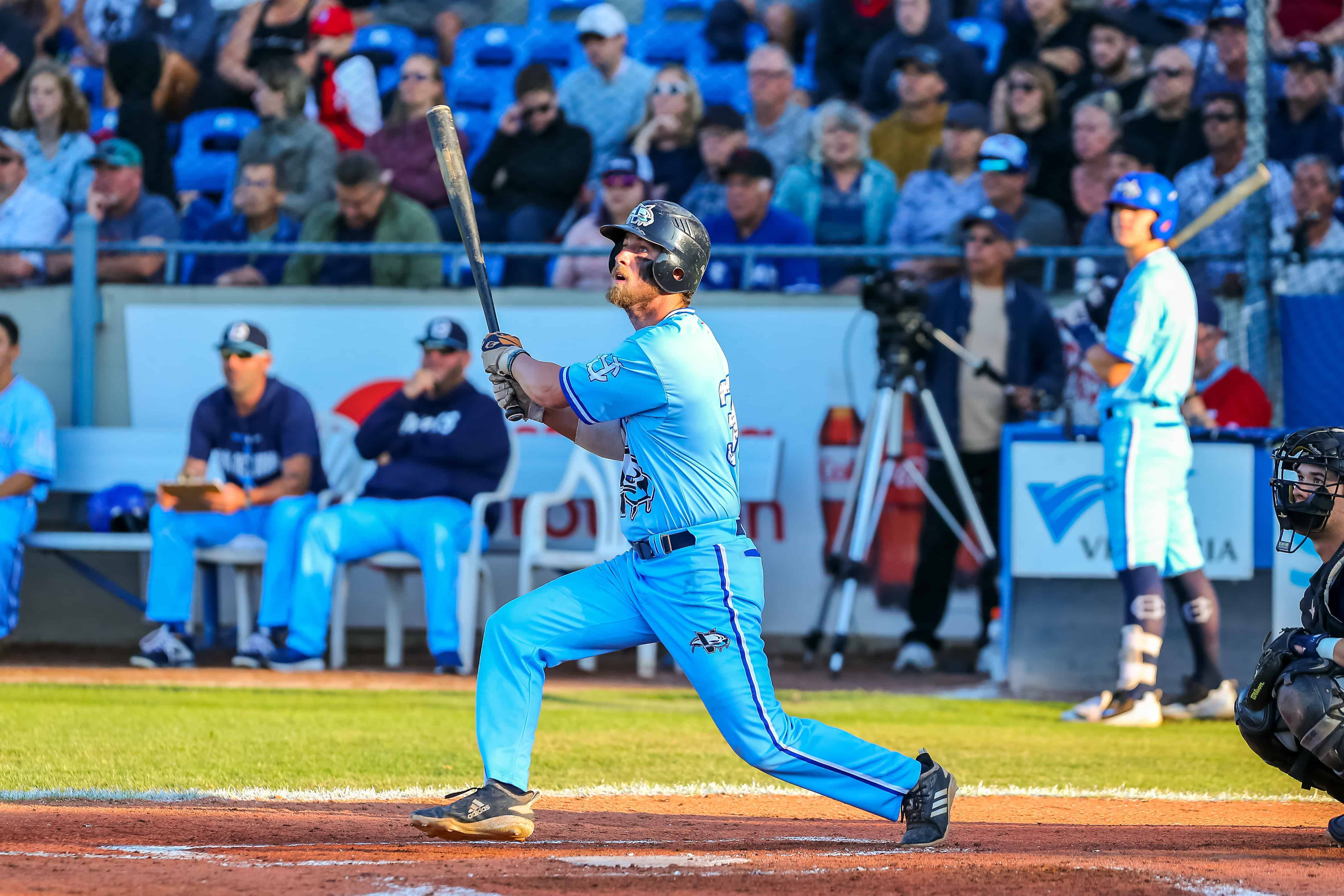 2019 Player of the Year Griffin Paxton had a pair of RBI singles and a key hit in the bototm of the ninth that helped Victoria clinch the North Division Championship series over the Wenatchee ApplesSox. (Photo by Christian J. Stewart)

Brett Gillis would score Jashaun Simon from third with a sacrifice fly to bring Wenatchee within a run, and also put two outs on the board. Smith and Montgomery then hit back to back hits to jump the ‘Sox back ahead, as Brett Gillis came on in relief to try and seal the pennant. 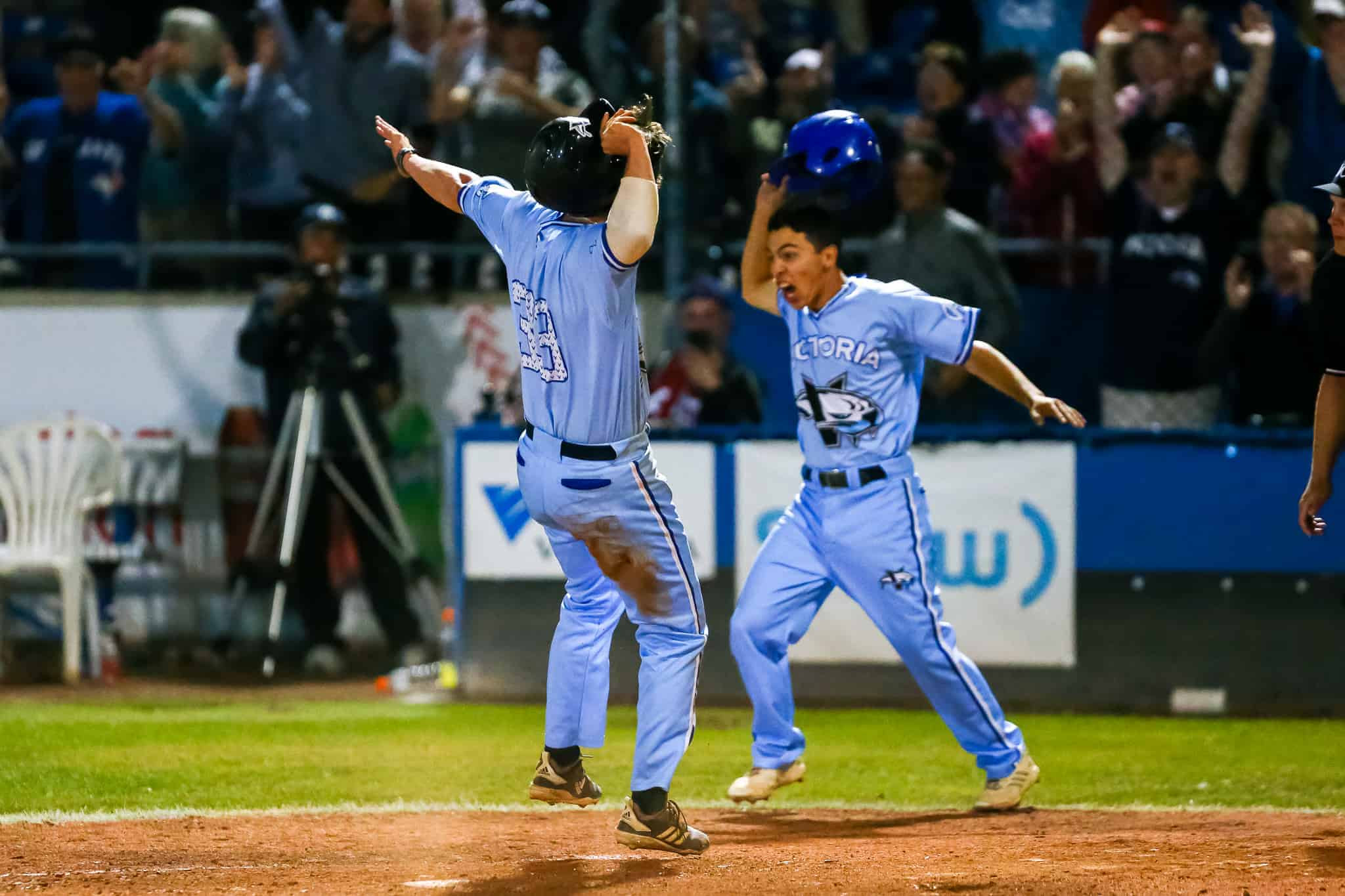 In the bottom half, both Plaia and Wilson reached for Paxton—who then collected his third RBI of the night to bring Victoria within one. Spohn then came up one batter later, and smacked a single to right field that scored Wilson and Paxton to give Victoria their second WCL Finals appearance in franchise history.

Game one of the WCL Finals will begin tomorrow night at Wilson’s Group Stadium, first pitch is scheduled for 6:35p.m.