VICTORIA — Zach Swanson tied a season high with five strikeouts in his first career playoff start, but it wasn’t enough as the Corvallis Knights took down the Victoria HarbourCats 14-8 in game one of the WCL Finals Friday evening at Wilson’s Group Stadium.

The top two teams in the regular season, the Knights (42-12) and HarbourCats (39-15), combined for 81 combined regular season wins— the most by two teams to reach the WCL Finals in league history. Victoria and Corvallis also lead the postseason with runs in 2019, coming into the Finals with 16 runs scored apiece in the Divisional Series. 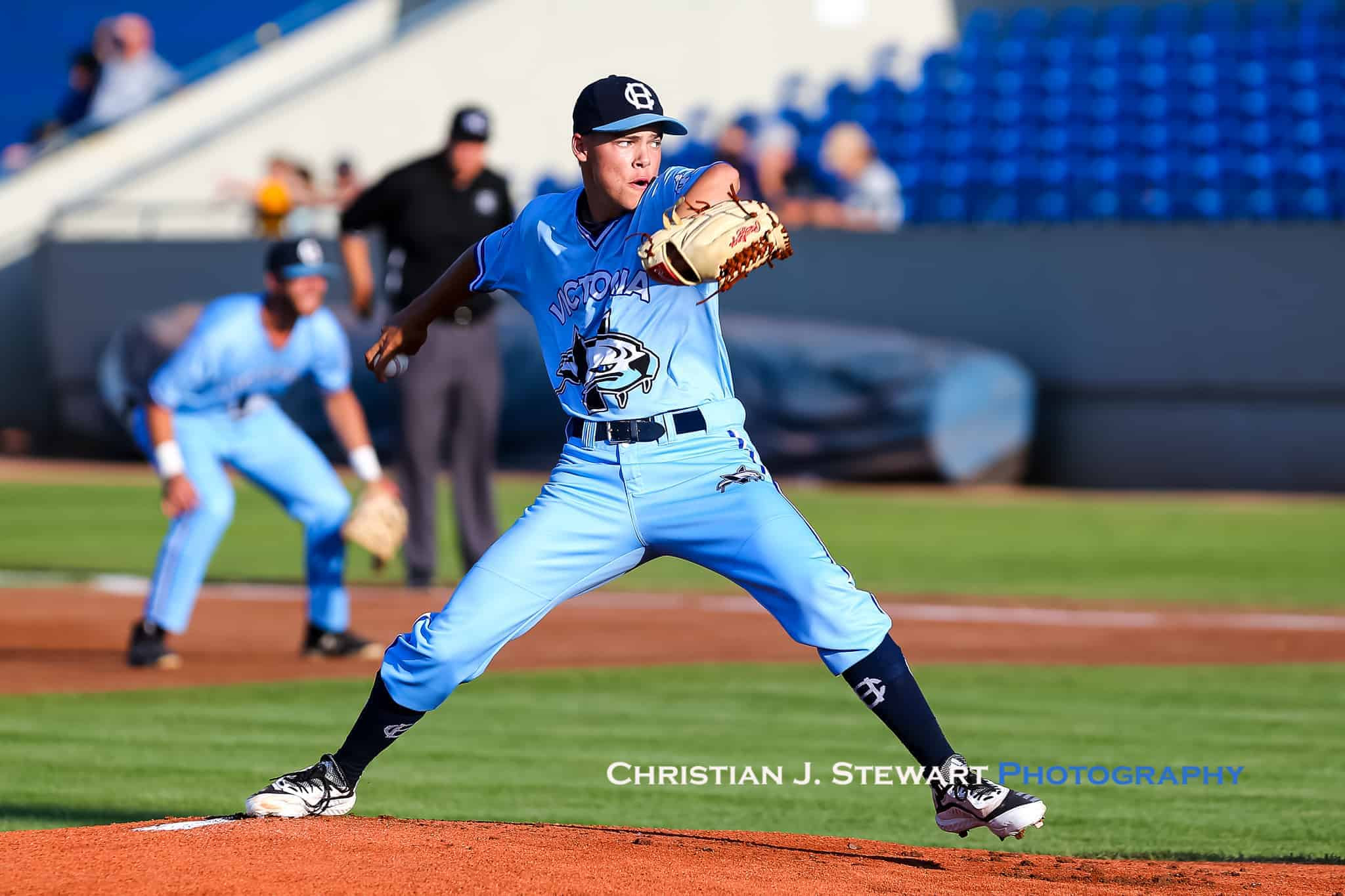 Zach Swanson fires towards home earlier in tonight’s game. (Photo by Christian J. Stewart)
The record setting HarbourCats offence, however, couldn’t overcome an early deficit in the game one loss.

Meeting for the second time in three seasons in the championship round, after Corvallis beat Victoria two games to one in the 2017 Finals, the Knights used a seven-run rally in the third to take game one on the road in Vancouver Island. 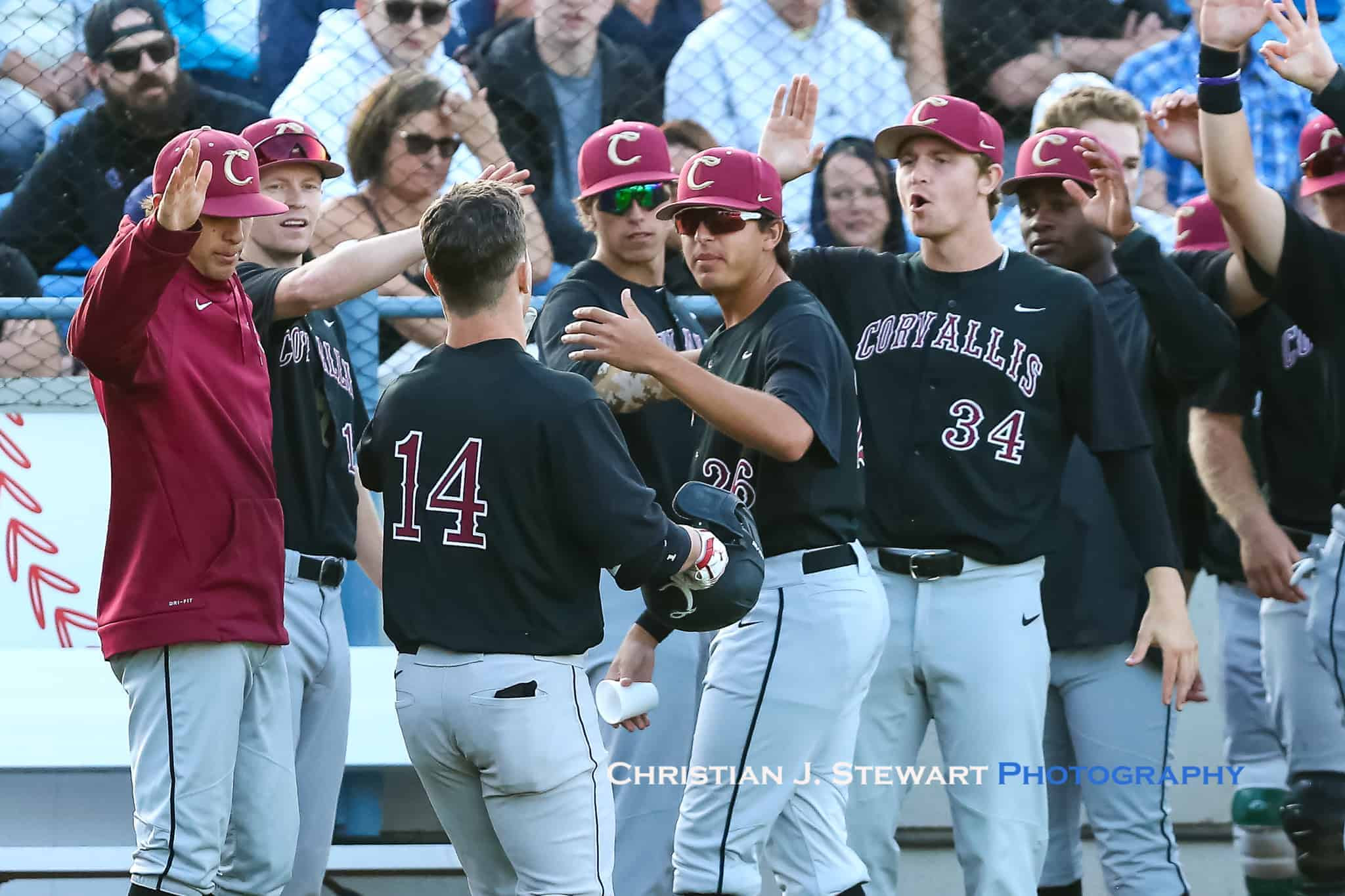 Corvallis celebrates in the dugout after routing Victoria in game one of the Finals. (Photo by Christian J. Stewart)
Swanson, making his first start since allowing just two hits and no runs over five innings in a HarbourCats victory over the Port Angeles Lefties in the regular season finale last weekend, retired the first four Knights of the evening to start the game before running into some trouble beginning in the second.

Zack Moeller took a 1-1 offering from Swanson over the fence to give Corvallis their first hit of the game, and a one run lead. Trace Tammaro and Nick Yovetich would draw back to back walks to continue the frame, but one out later Swanson would strike out Jake Harvey to end the inning and keep it a one run game.

In the home half of the second, Parksville’s Liam Ballance got his first hit in his first start of the 2019 postseason. Ballance finished the regular season by collecting three hits in the final two games, including one homer, and tonight the outfielder launched a ball that ricocheted off the left field foul pole to even the game at one. 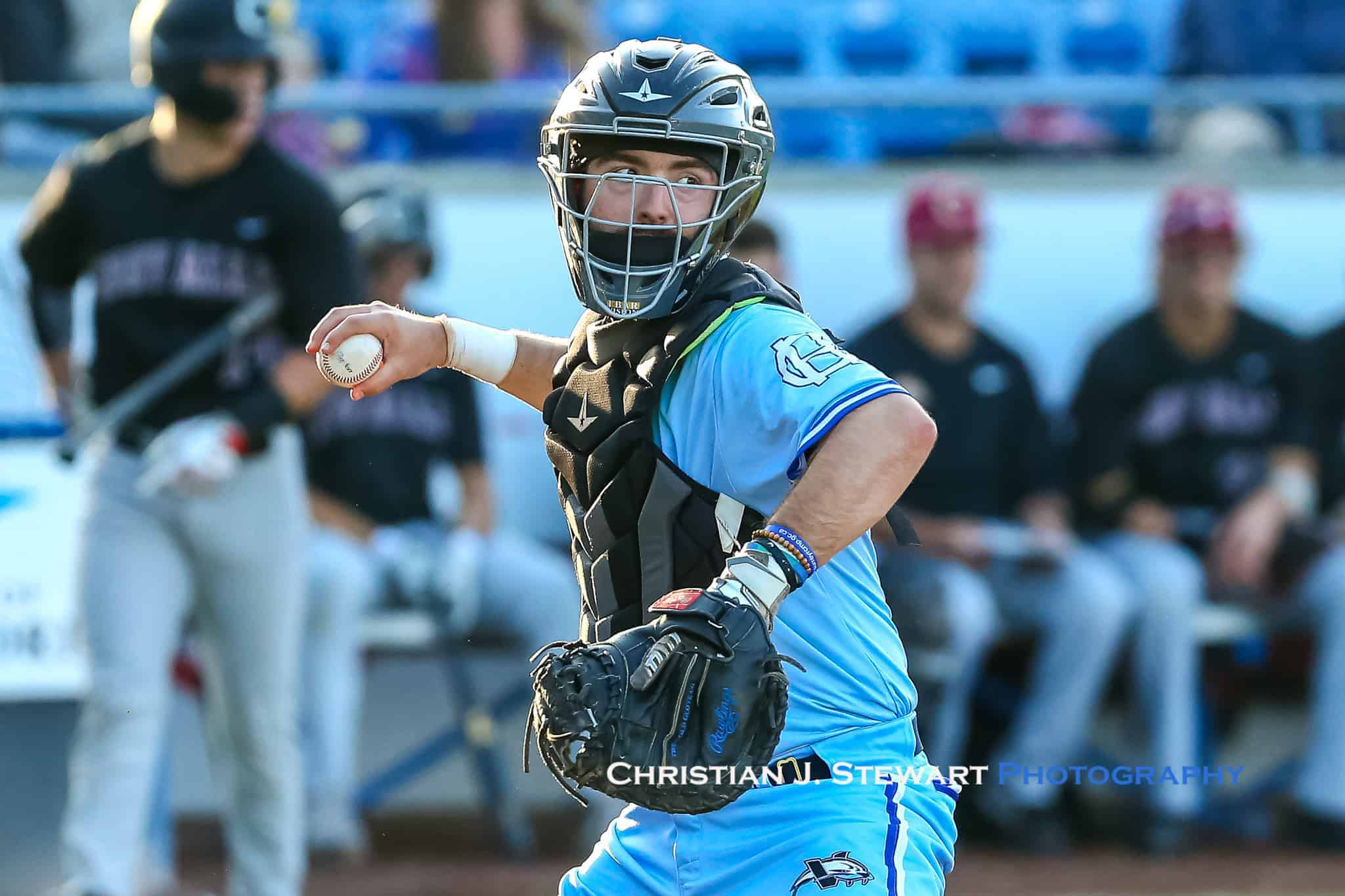 MacGregor Sharpe behind the plate gets ready to fire the ball to second base tonight. (Photo by Christian J. Stewart)
However, one inning later, Corvallis continued the solo home run trend to retake the lead—as the first four hits of the game for both teams were all solo homers. Brooks Lee got the first non-home run hit of the game with one out—a single to centre field—but Swanson limited the damage by retiring the next two Knights in order to end the third.

On the opposing mound, Utah University’s David Watson got the nod for the Knights, and allowed six hits over 7 1/3 innings.

Corvallis would send 10 batters to the plate in a seven-run fourth inning to put the game out of reach, racking up four hits in the deciding frame. The HarbourCats would load the bases in the eighth after Watson exited and score three runs, but couldn’t only score two more ninth to fall short of coming back. 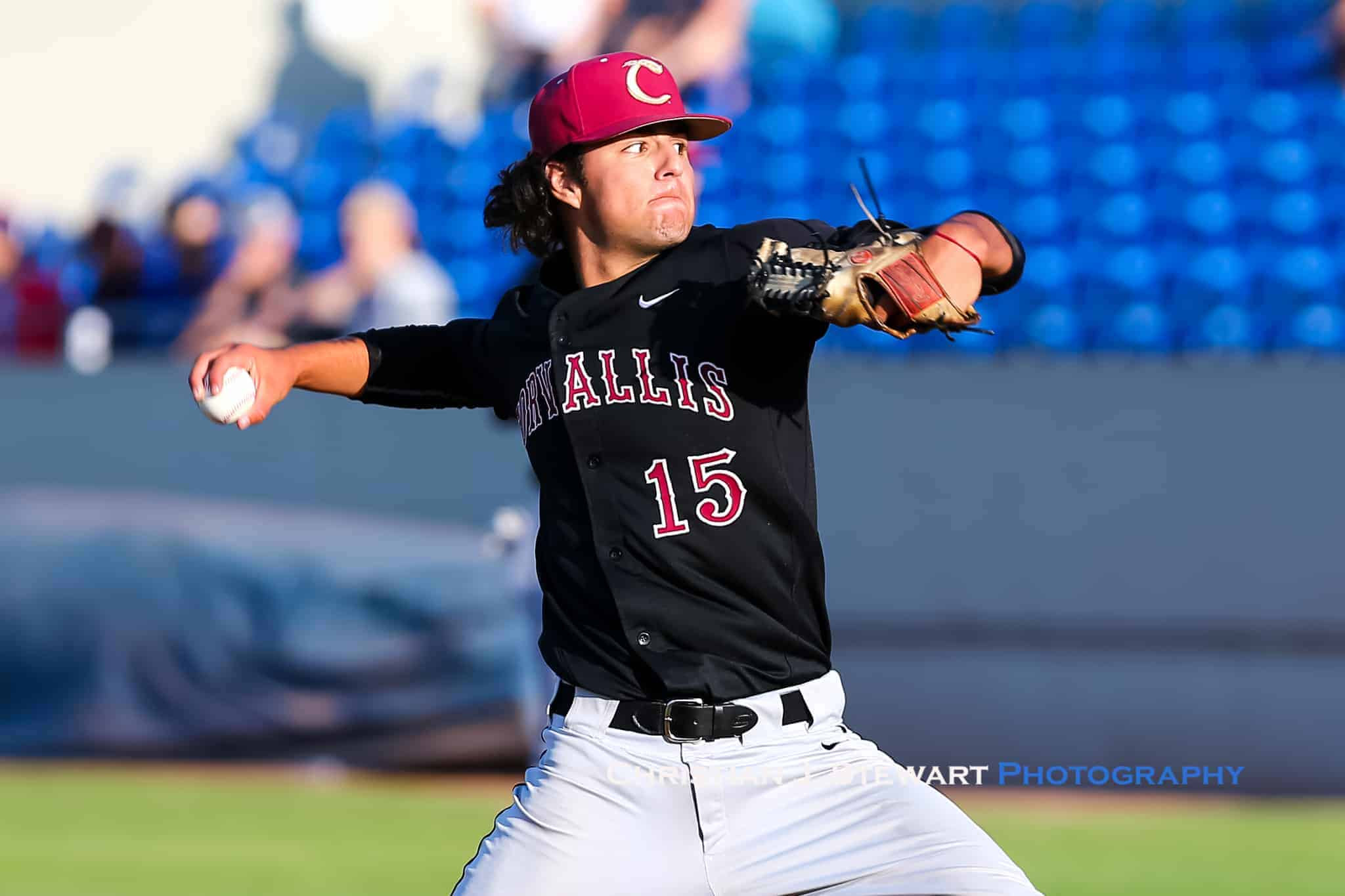 Corvallis starter David Watson fired a gem on the hill tonight, holding Victoria to just six hits on the night. (Photo by Christian J. Stewart)
With the loss, Victoria dropped their first game at Wilson’s Group Stadium since July 21, and will now need to win the final two games of the series in Corvallis to clinch their first WCL title. On the bright side Victoria hasn’t lost back to back games in nearly one month (July 21 and 25), and have only dropped two games in a row four times this year. The HarbourCats haven’t lost more than two consecutive games all season.

First pitch for game two of the WCL Finals is scheduled for 7:05p.m. tomorrow evening at Goss Stadium in Corvallis, and you can catch play by play man Mike Edwards calling the game in Oregon here.