He can lay claim to one of the most clutch performances in BC Lions history. And for Darren Flutie, memories of his epic three-touchdown game at snowy McMahon Stadium in the 1994 Western Final can actually be traced back to a couple of weeks prior. As he remembers it, his older brother Doug and the heavily favoured Calgary Stampeders might have gotten a bit overconfident.

“Calgary was favoured by double digits in that game and they crushed us early in the year,” recalled Flutie from his Massachusetts home earlier this week.

“Then they came to Vancouver for the final regular season game and squeaked one out (24-23). I know, because of Doug, that they were picking out seats for the Grey Cup for their families.”

“This was all kind of stirring inside of me because they hadn’t even beaten anyone in the playoffs and still had to go through us. We were getting no respect. Going in with that attitude made me focused to play the best football that I could.”

Of course, it would all pay off with Darren and the Lions sipping from the Cup after a last-second victory over Baltimore in front of the home fans, Flutie himself holding the ball for Lui Passaglia’s winning field goal.

But it was the fairy-tale win against Doug and the Stampeders that made the return home possible for Darren and company. His third touchdown catch that afternoon- one play after his amazing leaping catch set them up inside the five-yard line- was the winner with no time on the clock. All of these memories have come flooding back as Flutie, along with Geroy Simon, gets inducted to the Wall of Fame on Saturday night.

“I guess I was a little surprised at first,” Flutie said about getting the call.

“After retiring and going into the Canadian Football Hall of Fame as soon as I was eligible, I figured that was it. I never really thought about being honoured by individual teams I played for. Then when you stop to think about it, it becomes more personal and more of an intimate honour. The more I thought of it, the more gravity I put toward it. I’m joining some great players and it’s a great feeling that the BC Lions think enough of me to honour me.”

Still, if he hopped in the time machine back to 1991 when he first joined the Lions mid-season, the younger Flutie never would have envisioned this night would come nearly three decades later. The chance to join Doug in the same huddle and play in front of over 40,000 rabid fans at BC Place seemed improbable in itself.

“Personally for me, it was crazy,” remembers the former Boston College receiver.

“There was a mix of emotions because of my NFL dream. I wasn’t quite sure if it had ended. I was coming from a camp with the Cardinals where I had been released on the final cut-down day and all of a sudden I’m in Vancouver, a place I had never been to before, and I had only watched a couple of CFL games with Doug playing.”

When he looks back on it, Flutie admits he may have had to win some people over as well.

“It was a strange time in British Columbia. I mean yeah, the team was rolling. They were getting lots of fans and scoring lots of points but some were saying the only reason I was there was because of my brother. There were other receivers that were doing very well that year and there were questions like ‘why do they need another receiver?’ and ‘who is this guy with the same last name as our quarterback?’

“I felt a lot of pressure to perform. Every practice, I felt all the eyes were on me. It was a tough time. The feeling I had was I had to get better to prove myself.”

As fate would have it, the two brothers would only appear in eight games together, Doug bolted for the Stampeders before the start of 1992, ending any hope of the pair hoisting the Grey Cup together. However, that wouldn’t prevent Darren from carving out his own legacy with the Lions. His 1,731 receiving yards in that storybook 1994 season was a franchise record until Simon broke it ten years later and his 5,870 receiving yards ranks eighth among all-time Lions. We still couldn’t resist asking if he harbours any regrets over not playing with his brother for longer than he did.

“I would love to have done it more as I was playing, but now that I look back that’s the best thing that could have happened to me,” he said.

“Those eight games were great and it was nice to play with him. I enjoyed it. But going our separate ways after that was the best thing for me because I had to prove myself as an individual player. If I kept playing with Doug, I would have been his younger brother that he was throwing to. I got my own personality and my own personal career where I ended up doing well. It was a lot of fun while it lasted and I wish we would have won a Grey Cup but going our separate ways I think was the best thing for my career.” 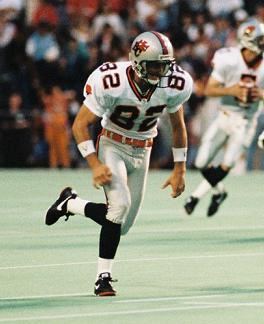 The definition of bittersweet may have been the two brothers embracing moments after his big touchdown catch to complete the upset in 1994. Darren can still picture the entire afternoon and that culmination touchdown drive in his head, right up until the winning reception from Danny McManus.

“It was a wide-open game. We had Kent Austin at quarterback in the first half and people forget how well he played,” remembers Flutie.

“I think he threw two of the touchdowns to me. When Danny came in for that second half, that was the start of him and I creating that chemistry together. As for that last drive, we were so lucky to get there. Ray Alexander had to block that field goal to give us a chance. Then we started to roll. Matt Clarke had a big catch. I think Yo Murphy had a big catch. The snow was starting to accumulate and we could just feel offensively that we were going to get it done.”

His highlight-reel grab at the five would quickly become a mere footnote in the grand scheme of things. He lights up when asked to describe the final play in slow motion.

“All I can remember about that play was that it was a rub route with Yo Murphy. I didn’t finish my corner route because I felt like I was open. I abruptly cut that route off and turned and as I turned, I could see Danny already throwing the ball. He anticipated me hooking up in that hole just as I was thinking ‘should I go to the corner or should I hook up?’ And then boom, the ball is coming at me and drills me in my chest. I had no choice but to catch that thing. I think it left an imprint in my chest. That was great. It felt like a real separation for me. That playoff game and beating Calgary kind of sent my career off on its own path.”

Doug leaving for the Stampeders may have allowed him to be his own guy, but the chance to play with him here in BC no doubt provided the springboard to his Wall of Fame career. And the family will be foremost in Darren’s mind when he sees his name enshrined onto the wall this weekend as part of a halftime ceremony.

“I’ll never forget coach (Bob) O’Billovich and (player personnel director) Bill Quinter bringing me to the Lions. My teammates from ’91 to ’95 were some of the best guys you can meet,” said Flutie.

“I combine that with my wife and I expanding our family. Two days after winning that 1994 Grey Cup our daughter was born. All those original memories from the CFL and my family coincide with those years in Vancouver. I can’t help but think that those were the best years of my life and my family’s life. If it wasn’t for ’91 to ’95, I wouldn’t have been able to do any of it.”

And in a way, he can thank his brother for helping him out and choosing Grey Cup seats for his family nearly 25 years ago.