Anticipation continues to grow for what promises to be a very special weekend for the UBC Thunderbirds who begin their exhibition season hosting the NCAA Division I University of Wisconsin Badgers Friday, August 30th and Sunday, September 1st at Father David Bauer Arena.

Wisconsin’s roster features a remarkable 12 NHL drafted players, including K’Andre Miller who was taken by the New York Rangers in the first round of the 2018 NHL Draft.

“What a great test to start your season,” said UBC head coach Sven Butenschon who enters his fourth season at the head of the program. “Friday night it’s going to be electric. They’re an extremely talented group, they’re going to be able to skate, their skill level is off the charts. They have some potential NHL superstars so it’s going to be really cool to see them at this part of their career.”

Plenty of scouts are expected to be in attendance in large part to see projected 2020 first round pick Dylan Holloway. The Calgary, Alberta native was named 2019’s Canadian Junior Hockey League Player of the Year having scored 41 goals with 88 assists in just 53 game for the AJHL’s Okotoks Oilers. Holloway has been ranked within the top ten projected skaters for what is expected to be a very deep 2020 draft class.

As for the Thunderbirds, this weekend will provide a first look at their 2019 recruiting class.

Coached by former NHL player and head coach Tony Granato, now in his fourth season, Wisconsin is one of the most storied division I hockey programs with six NCAA championship titles and 12 frozen four appearances.

The Badgers travel to Vancouver Wednesday and will hit the ice at the Doug Mitchell Thunderbird Sports Centre for a practice at 11:00 a.m. on Thursday, August 29, which is open to media. UBC will also be practicing concurrently on another sheet.

The rare and historic weekend with the Badgers officially begins Friday, August 30th at Father David Bauer Arena. Puck drop is scheduled for 7:00 p.m. PT with admission by donation. The second half of the exhibition double header will begin Sunday, September 1st at 3:00 p.m. PT. 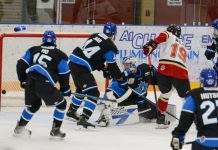