For years, they were track and field’s power couple, captivating and inspiring the current wave of North American athletes. Now, Canadian heptathlon record holder Brianne Theisen-Eaton and her husband, American decathlon record holder Ashton Eaton, are ready to expand their reach as the ambassadors for the 2019 IAAF World Championships in Doha, Qatar, from Sept. 27 to Oct. 6.

Now more than ever, it is an honour to be able to represent the sport and the World Championships itself. “When you are an athlete, it always sounds like something that was far away and something that you would never be doing, but both of us were surprised that we were asked,” said Theisen-Eaton. “It’s a big deal for the IAAF to see you as someone who represented this sport in a way that is worthy of being an ambassador. Especially being the year that the decathlon and heptathlon will be happening on the same two days; it’s never been done before so it will be fun for us.”

“Being an ambassador is step one for us,” said Eaton. “After leaving the sport in 2017, we focused on our careers. Being a 30-year-old entering the workplace after being a professional athlete, we needed to find our skillset and what we were interested in. Once we identified that, we wanted to get back involved in what the future of the sport looks like and how we can contribute to it. Going to Doha and seeing the event itself will hopefully spark inspiration.”

A two-time Olympian (2012 and 2016) and bronze medallist at the 2016 Rio Olympic Games, Theisen-Eaton is the Canadian heptathlon record holder, a record she set at the 2015 Götzis Hypo-Meeting with 6,808 points. In her two appearances at the IAAF World Championships, the Humboldt, Sask., native claimed silver in both contests, adding to her total of seven international medals. For Eaton, he is the former World record holder in the men’s decathlon, accumulating a total of 9,045 points at his last World Championships in 2015 in Beijing, China. He still holds the World Championships record with that total and is the American decathlon record holder.

Between the two, Theisen-Eaton and Eaton are the definition of power couple when it comes to athletics, claiming a total of 15 medals throughout their careers. As they return to their first World Championships since retiring, they believe it’s going to be a completely different experience for them. Since 2016, they have taken time away from the sport, but now hope to re-introduce it back into their lives.

It’s also fitting to have two of the best multi-event athletes at this year’s World Championships as the men’s decathlon and women’s heptathlon will be take place at the same time, something that the pair say will bring only bring positive experiences for the athletes.

With one of the most talented decathlon and heptathlon fields competing at Khalifa International Stadium, multi-event athletes will bring their best performances to Doha, with the 2020 Olympic Games just around the corner. Canadians Damian Warner and Pierce LePage are among those in the group, hoping for a spot on the podium and both Theisen-Eaton and Eaton believe it will be an interesting competition for the Canadian duo.

“If they have a good bond and can push each other, which I think they will, I know Damian is a very competitive person and is older and to have Pierce come in and challenge him in a lot of the events, that will definitely inspire him,” said Eaton who formed one of the most successful decathlon duos for the United States with Trey Hardee. “For Pierce to try to prove himself, it will also push him to do great things. Being his first senior World Championships, it will be extremely helpful to have Damian there. We all remember our first World Championships and we were all like, ‘What is going on?’.”

“Damian is the type of athlete that would embrace the title of role model,” added Theisen-Eaton, being on the same team as Warner at numerous Championships and Games, including the 2012 and 2016 Olympics. “Knowing Damian, he would be happy to share any wisdom he has with Pierce.”

Throughout their careers, they were able to work on and pursue their dreams together. More than just training partners, being married and knowing each other at that level, they were focused on finding success together. It’s something that they believe led them to find success at the same time.

Theisen-Eaton’s dream of becoming an elite athlete and pursuing her Olympic dream was sparked when she moved from Saskatchewan to Oregon, being in the environment where she met teammates and Eaton who had the goal of becoming professional and one day reaching the Olympic podium.

“Being able to train with Ashton, I felt like it was a competitive advantage because a lot of people have training partners, but when you’re married you have so much more of an invested interest in each other’s success. Sometimes it mattered more to me that Ashton was doing well, than if I was doing well,” said Theisen-Eaton. “If something wasn’t going well at practice we would really try to help each other, with our coach showing us visually and Ashton by doing it physically, ‘It should feel like this.’ That’s not the kind of coaching athletes get. You don’t get to replicate a feeling that another athlete has when they’re doing it right. We had a really unique situation, synced goals in training, eating, socializing, everything was together and it really helped our careers.”

“There’s not a day that goes by that I don’t lean on something that I’ve learned in the decathlon,” Eaton added. “We’re 30-years-old now, we did that for 10 years, we dedicated a third of our lives to athletics. We did it together and we learned things that will help us find success in the future as well.”

Currently, Theisen-Eaton is working on getting sport science technology and programs to more than just athletes, beginning with elite executives, creating health and wellness plans around their lifestyles. Eaton has returned to school after spending time working in software development, pursuing a more technical background in science and technology, by studying mechanical engineering. “I really think athletes are like scientists. We go into competition and training like it’s an experiment, trying to get better through a very systematic process and we’re trained to be able to take it into different fields.”

As they continue to watch the growth of the sport on the track and their own careers, they are also growing the Eaton family. Announced on Twitter and Instagram last week, the couple are expecting their first baby in February 2020. “We wanted to take a few years to figure out who we were and what we wanted to do before having kids. We’re really excited about it,” said Theisen-Eaton. 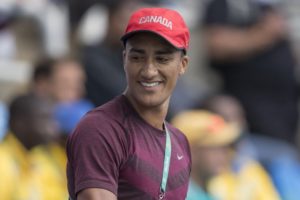 When asked about which side of the border the child will represent when the time comes, it’s still up in the air, but they will have dual-citizenship and decide on their own. “No pressure,” joked Eaton. Bringing up the time when Eaton wore the Team Canada hat during the Olympics, they will be part of Team North America.

Preparing to return to the sport, one moment stands out above the rest for Theisen-Eaton. It was the 2009 World Championships in Berlin, as she and the rest of the competitors from the heptathlon waved to the crowd, making their way around the track for a victory lap together. Near the end of their lap, they were stopped and told to walk the final 100-metres since Usain Bolt had just broke the 100-metre record for a second straight year. As they started walking, that’s when the crowd started.

“The crowd started booing,” recalls Theisen-Eaton. “They wanted us to wave and finish our victory lap. We started waving and continued our lap and they just started cheering really loudly. I just remember us saying ‘This is so special.’ At the World Championships, the crowd cares about all of the athletes.”

For Eaton, his was the 2015 World Championships – one of the final decathlons of his career, in addition to his first major decathlon since taking the previous year away from the sport. “I remember showing up to Beijing being super excited to be back. Hanging out with everyone again, I knew it was going to be one of my last decathlons, which turned out to be my second last.” It turned out to be a World record-breaking performance from Eaton as well.

They will look to create new memories for themselves, as well as memories for the next generation of athletes and fans entering the sport. At the 2019 IAAF World Championships it will be a different experience for them and they are looking forward to all of it.

“We’ve never spectated the heptathlon and decathlon before so I am excited to spectate it with none of the stress of competing,” said Theisen-Eaton.