September 16, 2019   Victoria, BC (ISN) – Some would follow the sports adage and say “a win is a win.”  Others more knowledgeable of 2019 BC Football Conference parity will tell us that some wins won’t equal post season success. The later may apply to the 2nd place Westshore Rebels as they dominated the first half of play against the fifth place Huskers, but let their foot off the gas pedal in the second half, cruising precariously to a 27-15 win with only four weeks remaining in the regular season and a season-defining match up looming next weekend.

Rebels starting QB Shawn Lal would throw for 333 yards and three touchdowns, including a 70-yard strike to Hayden Crothers to lead his team to their fifth win of the season. Crothers would lead his team in the win with two touchdowns. Zachary Lubin would rush for 109 yards including a 20-yard TD, and kicker Will Hughes would add a pair of field goals in the victory of the now 1-5 Valley Huskers of Chilliwack.

The Rebels would command the first half of play, Lubin rushing to score in the first quarter from twenty yards out. Hughes would kick a field goal as the Rebels would strike a 10-0 lead over the Huskers. The Rebels would take a 17-0 lead when Lal would connect with Carothers on a seventy-yard pass and run play.

Normally, 70 yards would be a shoe in for the longest play of the game, however a defensive miscue after an errant field goal attempt would see Husker kick returner Brandon Poulin return the ball out of the Rebel’s end zone 118 yards for the Valley Husker’s first TD of the game as time expired in the first half of play.

A series of undisciplined penalties would cause the Rebel’s offense to sputter in the third quarter despite jumping out at one point to a twenty-point lead late in the third quarter. Hughes would split the uprights to start the second half scoring midway through the third quarter, until Crothers would be the recipient of another Lal pass, running the sideline to the end zone for his second major of the game to put his team further ahead 27-7 with 1:18 remaining in the quarter.

Perhaps feeling the game was in hand, the Rebels would visit their ways of old in the fourth quarter, racking up unnecessary penalties to favour the Huskers. The Rebels would have the book thrown at them, being assessed fourty-five yards on one play alone to give the Huskers favourable field position.  Husker’s QB Logan MacDonald, sharing passing duties with Reid Vankoughnett in the game, would find a seam between the Rebel’s secondary, hitting Ethan Daikow just inside the goal line for only their second major of the game.

A blocked Husker convert attempt and a Rebels safety would see Westshore close out the game with the 27-15 final victory.

The win sets up a week seven showdown with the undefeated Langley Rams visiting September 21st at Westhills Stadium in a battle for first place. 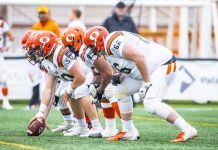