He said he wasn’t satisfied just yet. And to Duron Carter’s credit, he lived up to that statement.

Carter’s 67-yard touchdown bomb to Shaq Johnson proved to be a major catalyst and he would later snag his second TD reception in as many weeks as the BC Lions (3-10) cruised to a 40-7 victory over the Ottawa RedBlacks on a warm Saturday night in the nation’s capital.

The second quarter trickery also provided the visiting Lions with some more offensive balance- something they said they needed to build on after last week’s win- and helped pave the way for a sweep in this home and home series.

“I think that’s a receiver’s dream, to get to throw the ball to other receivers and for real, I was super stressed about it,” said Carter after the win.

“Right before the play, I tell Shaq ‘make sure that you’re running’ so I can hit him. We executed and it’s a touchdown.”

Mike Reilly was 21 of 27 for 352 yards and touchdowns to both Carter and Bryan Burnham, while Johnson finished with a career-high 160 receiving yards- all in the first half- on just three receptions. His final one was a bomb that set them up at the six-yard line and enabled them to tack on three more points for a 20-2 lead at halftime. John White’s first quarter touchdown run got the ball rolling offensively.

“It felt good, man. It felt like it was a long time coming,” said Johnson.

“Guys have been telling me just to keep my head in there and that those plays are going to come. I was just trying to get the first 100-yard game of my career. It was good to get that out of the way.”

And how about his view of the trick play?

“That was a crazy pass. He (Duron) was telling me all week ‘make sure you run.’ Because he completed that last one to Lemar (August 15th in Winnipeg), he wanted to take it to the crib this one. We executed it perfectly.”

When looking at the bigger picture, this Lions squad could perhaps finally starting to be putting folks on notice and playing to the potential many thought they would before the season began. It’s their first two-game winning streak of the season and they are now within six points of Edmonton for a crossover playoff berth with five games to play.

“It’s all or nothing,” added Carter.

“All of our cards are now on the table. We need to win out and that’s what we’re trying to do. Everybody has their backs up against the wall and we’re just trying to throw some punches.”

On defence, it was another complete effort and overall suffocation of Jonathon Jennings and a mostly inept Ottawa attack that only managed a pair of field goals and a single off a miss. It started from the game’s opening drive when they stuffed the RedBlacks on a third and one from the Lions’ five-yard line after the home team had moved the ball with relative ease into the red zone. From that point on, it proved to be a long night for the 3-10 RedBlacks who have dropped six straight. Jennings was benched in place of William Arndt in the third quarter after completing only eight passes all game.

“It was a great job of those guys just blowing it up,” said head coach DeVone Claybrooks of that early turnover on downs.

“They really just ran it down our throat the first six, or seven plays. We had some guys out of gaps but those guys responded and that’s what you want in a team and defence is to be able to respond and make a huge play when they had to.”

Claybrooks reminded his players some of those early miscues still need to be worked on.

“We still didn’t play the perfect game and that’s what we’re going to strive for,” Claybrooks said.

“As long as we continue to strive to play the perfect game, we’re not going to kill ourselves and we know we have a tough opponent in Montreal coming in who was able to squeak the win out. They’re going to come in with piss and vinegar so we’ve got to come in and match that intensity.”

For now, all they can do is quickly forget about this one and continue to execute one week at a time. They will get back to work right away in preparation for next Saturday’s home clash with the Montreal Alouettes.

“As cliche as it sounds, we can only control the opponent that we have. We don’t want to look ahead and we can’t look behind. We’ve got to put this to bed.”

They can for sure fly home knowing they played like the team they can be.

“I feel like our defence had another stellar performance, as did our offensive line. I think offensively, this is kind of the expectation that all of us and I’m sure our fan base had as well, going into the season.”

Time will tell if they can reap the rewards. 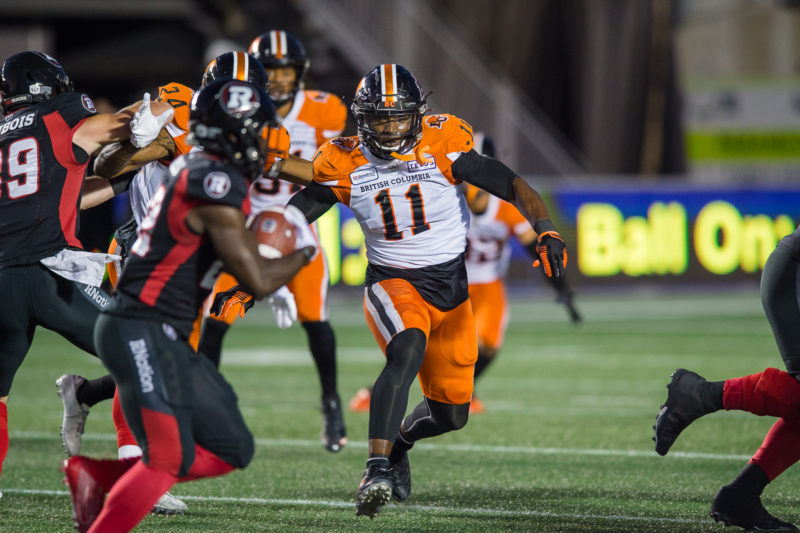 564- a season-high in total offence for the Lions in what was their most complete effort to date.

1,078- Burnham’s total receiving yards for 2019. He is the first since Geroy Simon to surpass 1,000 yards in Lion colours in four straight seasons.

100- career sack total for Odell Willis as he finally hit the century mark late in the fourth quarter. It was his first QB takedown since July 7th in Toronto.

4- turnovers committed by the Lions defence: interceptions by Crezdon Butler and TJ Lee, along with a pair on downs.

12- the total points managed by Ottawa in the home and home series, none coming from touchdowns.

Props to Jarious Jackson for another night of solid play calling. Aside from the Reilly, Carter, Johnson connection, there was a nice mix of runs and different personnel used in those running plays.

About Johnson: this is a receiver who has often been overshadowed in the offence playing with the likes of Burnham, Carter and in past years Emmanuel Arceneaux and a few others. It was good to see him break out.

Another week where we will praise the approach and execution by the offensive line. There were countless moments of Reilly sitting back with plenty of time in the pocket and they would capitalize on that more than once.

What else can you say about the milestones for Burnham and Willis? Two consummate pros showing up to work and getting the job done on a daily basis. Claybrooks joked he had decided to take Willis out of the game and then realized Odell was still stuck on 99. Solid coaching move.

The Lions return home to face the Montreal Alouettes next Saturday, September 28th. It is a 7:00 PM kickoff at BC Place.